Just two days ago, we featured a 1980 Topps card of Dave Roberts and mentioned that it was his only card with the Pittsburgh Pirates. Despite that statement and the title you see above, you have not been deceived. The Pirates have had two Dave Roberts over the years, the 1979-80 pitcher and the 1966 outfielder. They also had a Dave Robertson in their outfield in 1921, plus there have been two other Dave Roberts in baseball history. I mentioned one of those other two in the 1980 Topps article because search results for that card (“1980 Topps Dave Roberts”) turned up both players in the same search. I assume that most of you know the Dave Roberts who manages the Los Angeles Dodgers, even if you know him better as the guy who stole the base in 2004, which helped break the Boston Red Sox World Series drought. Dave Roberts is a popular baseball name and we are going to look at a Dave Roberts card today for the second time in three days. 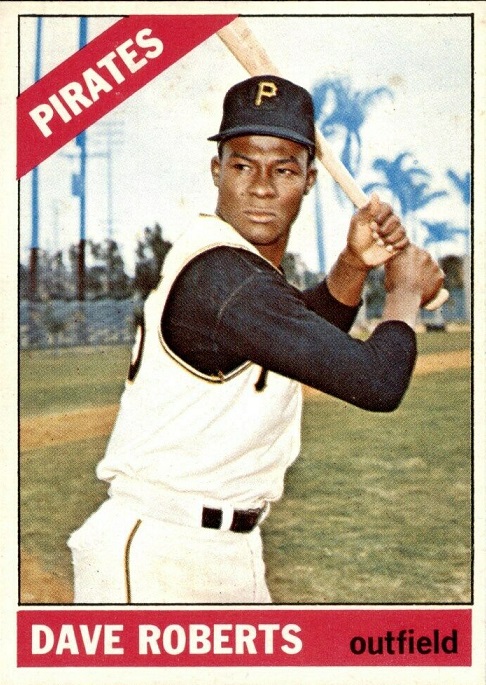 Today’s featured Dave Roberts was born in Panama and he turns 88 years old today. I was actually thinking of using him for yesterday’s Card of the Day until I realized that his birthday was today. This photo has something that we mentioned here before with the Manny Sanguillen rookie card. The strange blue airbrushing in the background, creating blue palm trees and utility poles. I have no idea why it would be done, but it’s not that uncommon to see.

The 1966 Topps set doesn’t have a fancy design or colors to match the team colors, but it just looks good. It’s not among my  top three favorite Topps sets from the 60s, but it’s definitely not the worst. I’m not a big fan of the 1967 cards with all of the writing in the photo. The 1962 set is among my favorites for any Topps set, and I really like the 1960 and 1968 designs. The 1966 set for me would be in the next tier. 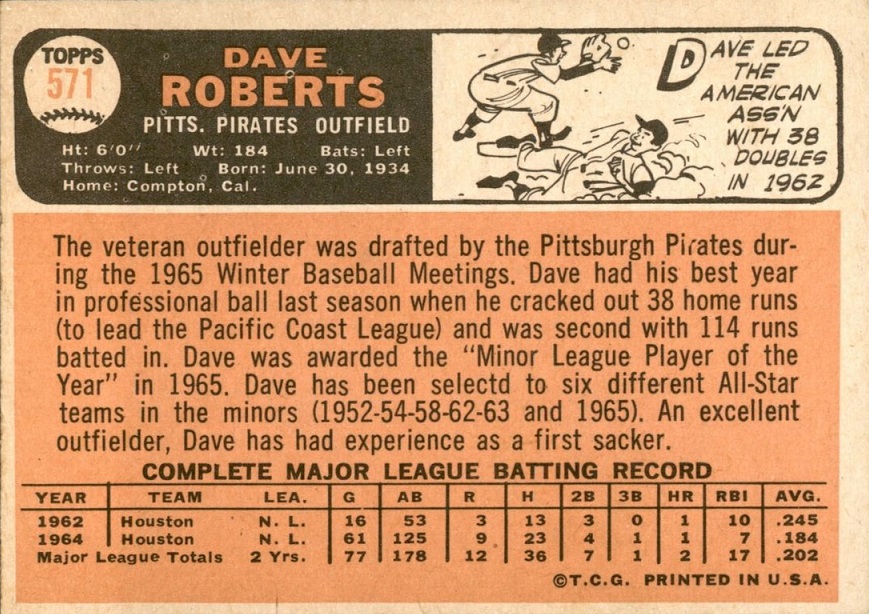 The back has a cartoon starring generic Topps man, who is versatile enough to represent every player in baseball, despite the fact he doesn’t look like any player ever. I like the color choices on the back, which makes everything easy to read, relatively speaking. A scan of the back is much easier to see than the card itself in hand, but Topps made some cards that I’m sure led to more eyeglasses being sold in this country.

The had an interesting choice for stats here, with plenty of minor league stats to choose from, but they decided to just go with his two big league seasons and that’s it. The cartoon and bio give you some fun facts from his minor league days (he had a lot of them by this point) and it lets you know how he joined the Pirates. This is a late series card, issued after he already made the team and he was playing for the Pirates. However, he played his final big league game on May 11, 1966, so many people were getting these cards (unknowingly) after his big league career was done.

If you’re interested in this card, there are a surprising number of options on Ebay, despite the fact that this is a short-printed high number series card. I found 73 listings ranging from $14 all the way up to $100 (though it has free shipping AND a best offer option). The card does sell often on Ebay, with 52 completed auctions in the last three months. I’ll note that many of them ended for under $14 and all of them were straight auctions instead of buy-it-now options. The highest priced closed auction went for $75 and it was for a PSA 9. A different PSA 9 sold two weeks later for $65.