Today’s Card of the Day celebrates a player all Pittsburgh Pirates fans know, even if they only know of him due to his announcing career. John Wehner was a third baseman for the Pirates from 1991 through 1996, then again from 1999 through 2001. He’s a Pittsburgh kid, who turns 54 years old today. He’s been the team’s announcer since the 2005 season. He also had three years in the minors with the Pirates before his big league debut, and he was a coach for three seasons between playing and announcing. Basically, he’s been with the Pirates for a little while. The card featured here today marks his debut in the majors. It comes from the 1991 Fleer Update set, a smaller set produced during the season, which highlighted players who were traded or who debuted in the majors that season. Wehner made his big league debut on July 17, 1991, not long after his 24th birthday. 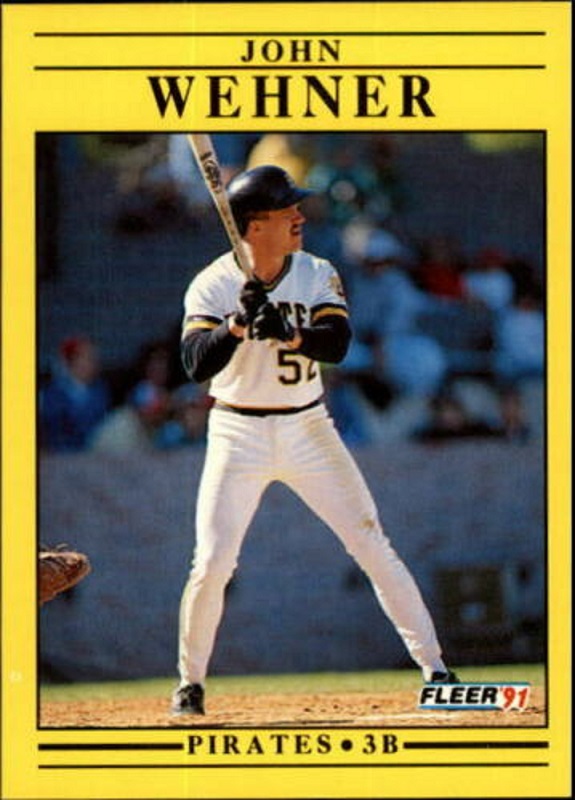 The front of the Update set is just like the front of the regular 1991 Fleer set, so you need to see the back of the card to know this is an Update card, unless you somehow memorized all the players in the 1991 Fleer base set (you didn’t, don’t even say that you did!). Wehner is shown here wearing #52, a bit of a giveaway that this is from early in his career. He wore four numbers during his time with the Pirates, and played 364 games in nine seasons, so I’m not sure any of those numbers would count as the number people are most familiar with for him. If I had to guess though, I’d say people would remember #7, the only number he wore after returning to the Pirates, following a two-year stint with the Florida Marlins.

The 1991 Fleer front design looks like it was made especially for the Pittsburgh Pirates with that color selection. I don’t remember if I liked the set the first time I saw it, but I definitely do now. 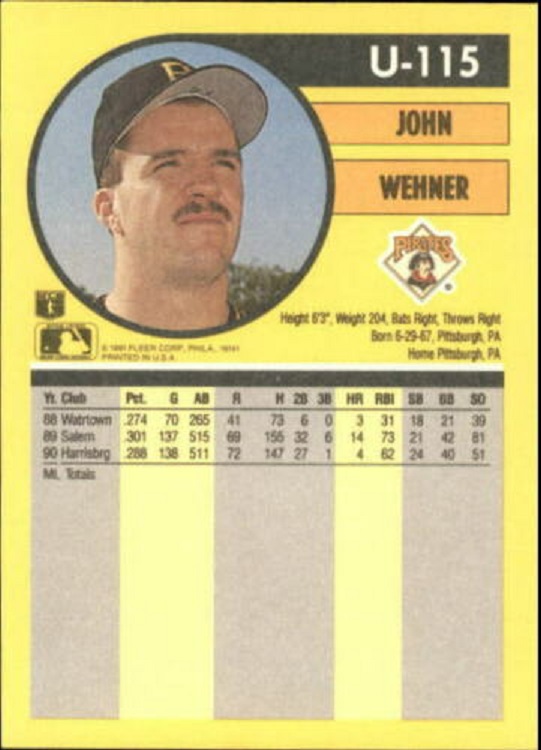 That number in the top right corner there tells you that this is an Update card. All of those cards had the letter “U” before the number. I think it’s interesting on this card that they have his complete minor league stats, but at the bottom they had nothing for the career totals, choosing to let you know in an odd way that he hasn’t played in the majors yet…even though the only reason that they gave him a card is because he made his big league debut. Wehner definitely burst onto the scene for the 1991 Pirates, helping them to their second of three straight National League East titles. He batted .340 in 37 games during his rookie season.

The back here adds a second photo for the player. It continues the usage of Pirates colors, and they have the old Pirates logo just under the name. That last part is always appreciated by me.

This isn’t a common card on Ebay, though you don’t really need more than 11 auctions for the card. The cheapest one is 99 cents and four other people are selling one for under $2 delivered. I have what I think is a better idea than just picking up this card. Why not get the entire 132-card factory sealed set for $8 delivered? That seems like a better option to me. There’s also a seller who has the Pirates 31-card set that includes 26 cards from the base set and five from the Update set, and they are asking $6.98 delivered.