Today’s Card of the Day feature celebrates the July 28, 1979 trade with the San Francisco Giants, which helped the Pittsburgh Pirates to their fifth World Series title. Bill Madlock was the big piece to the deal, but he’s been featured here three different times already, so I thought I’d give one of the other two players a shot. Since one of those players (Lenny Randle) didn’t have a card with the Pirates, that made this a very easy choice. It was made easier by the fact that lefty reliever Dave Roberts only had one card with the Pirates. So by process of elimination, we are left with card #212 from the 1980 Topps set, Dave Roberts. 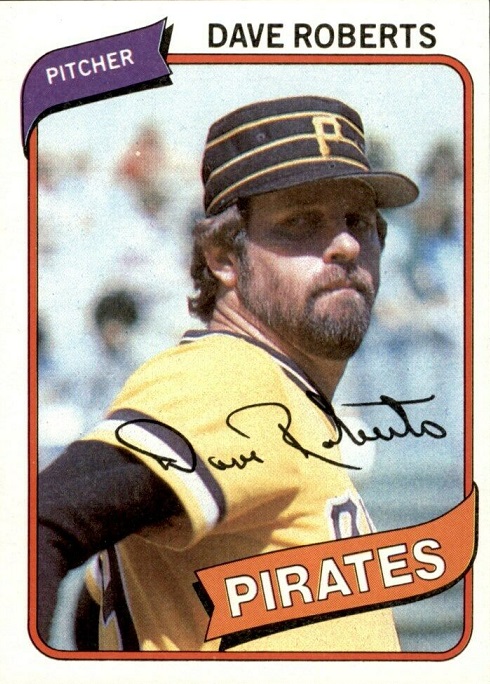 As mentioned here before, I’m not a big fan of the late 70’s Topps sets. The 1977-78 sets are two of my least favorite and the 1979 set isn’t that great. I like the way that Topps started off the 1980s with this offering. I like the shadow effects on the banners and the red box with rounded corners around the photo looks good. The 1980s has two of my absolute favorite sets in the 1981 and 1987 sets, but this is a nice set design as well. I think the black & gold with the pillbox cap definitely helps, but the entire set is a winner. 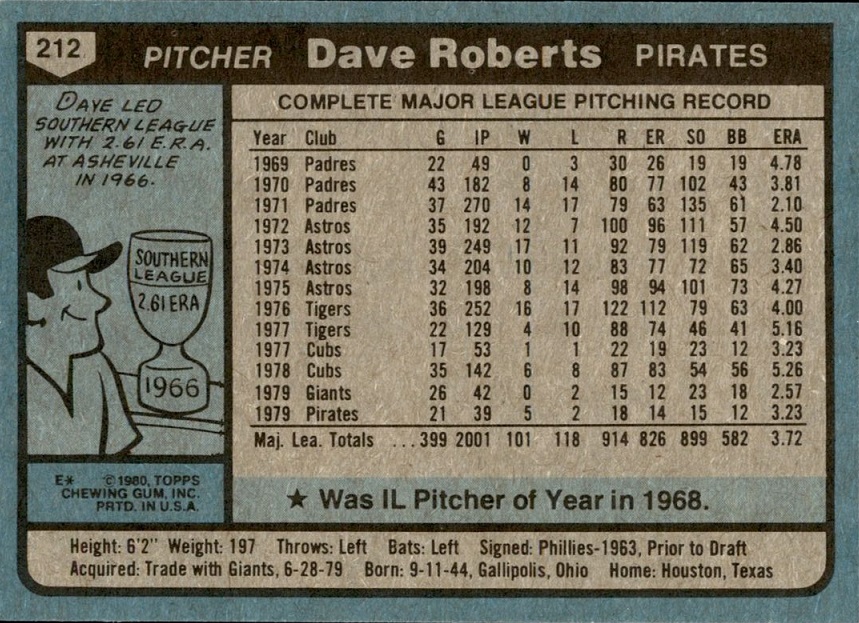 The back this year was the last time that Topps went with nine statistical categories for pitchers. In 1981, they expanded to include games started, complete games, shutouts and saves. Roberts was in his 11th season in the majors and two years had multiple teams. That left him with too much time in the majors to include his minor league stats, but he had just enough room to throw in a fun fact at the bottom. These cards also had comics on the side with the generic Topps man who looks like no player ever. Between the fun fact and the comic, you can tell that Roberts was a pretty good minor league pitcher. The stats on the card tell you just how much he contributed to the Pirates in the playoff run over the last three months of the 1979 season. He was once a workhorse starter, but by this point he was more of a lefty specialist type. He was almost invisible during the entire playoffs, facing just one batter, who he walked. Roberts had 98 innings left in his big league career at this point. The Pirates sold him to the Seattle Mariners early in the 1980 season.

I was going to give a count of how many auctions there are for this card on Ebay, but there was one big problem. Dave Roberts wasn’t the only Dave Roberts in the majors at the time. The Texas Rangers had their own Dave Roberts. So an Ebay search turns up both together. I still could have counted, except some people list multiple cards being sold individually in one auction listing. Without clicking on every one, I wouldn’t have the right count. It doesn’t really matter other than to tell you that if you did buy one and you went through one of those dealers, make sure you’re getting the correct player. The highest priced Pirates Dave Roberts goes for $7.24 delivered and it’s high grade. You can get them for as low as a $1 delivered, though completed auctions shows that people picked examples up for 55 and 65 cents recently. Dealers definitely take a chance when they do regular auctions at low prices.