Today’s Pittsburgh Pirates Card of the Day comes from the 1963 Topps set and it features catcher Elmo Plaskett, who played for the 1962-63 Pirates. He was born in the U.S. Virgin Islands, one of three players from that country who played for the Pirates during that era. Back in 1963, Topps had Rookie Stars cards with four players on it. Plaskett, who was born on this date in 1938, was the only player from the Pirates on this card, but we will look at the results of all four players. 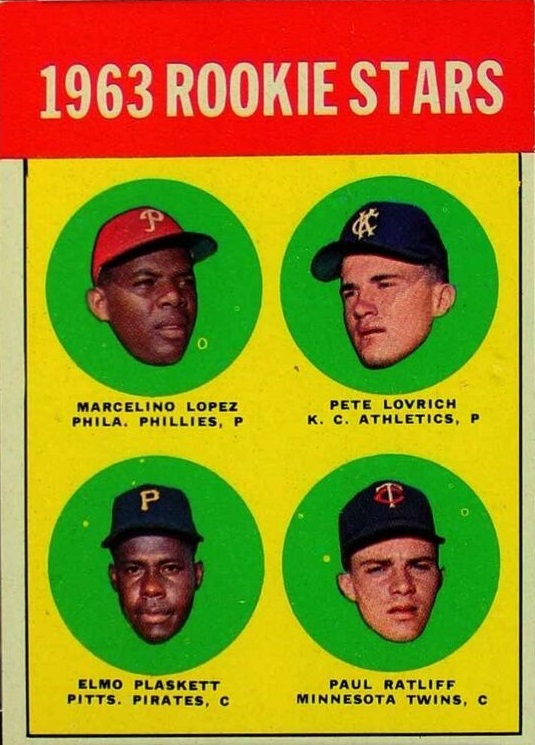 As you can see here, Topps went with the “floating head” photos for each player, which is creepy to me and many others, but it doesn’t look as bad (in my opinion) on these four player cards. I’d rather see regular photos with normal backgrounds like they used most years, but it’s not as bad as the 1967 Topps Test Stickers set.

Paskett is joined here on the bottom row by Paul Ratliff of the Minnesota Twins, who was also a catcher. The top row had two pitchers, Marcelino Lopez of the Philadelphia Phillies and Pete Lovrich of the Kansas City Athletics. I’ll get into the players below after we take a look at their stats. 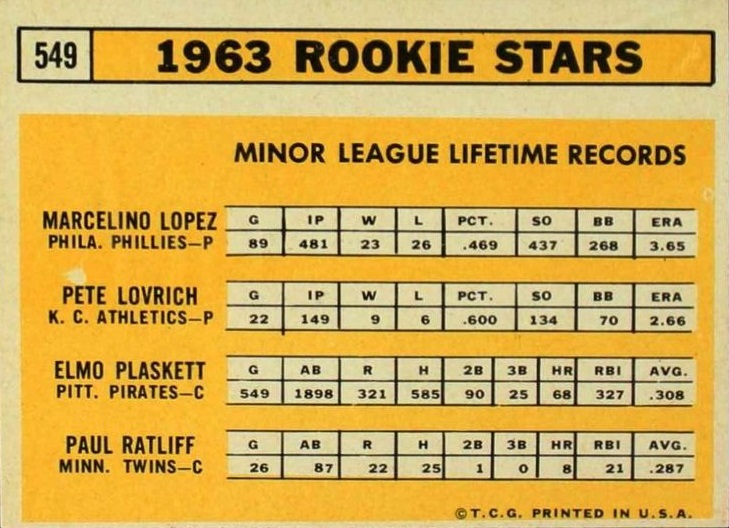 The back of this card is really plain looking and they don’t go into any detail about the players, such as age, height, weight, etc. The stats tell you that both Ratliff and Lovrich had almost no minor league experience, while Lopez and especially Plaskett had a decent amount of minor league time. Collectors back then had almost nothing to go on to figure out who was the best prospect here. Lovrich had better pitching stats, but we have no idea where he compiled those stats and his age would help a little. Plaskett had a strong average and a little bit of power, while Ratliff hit eight homers in 87 at-bats. Here’s a look at where they were then and how they ended up.

We start with Plaskett obviously. He turned 25 in the middle of 1963, so that’s not a bad age, especially since he saw the big leagues in 1962 for a brief time. He ended up playing ten games in 1963 and that was his last shot at the majors. He played 17 big league games total. Looking deeper into it, his best season by far was 1962, which was his sixth season in pro ball and he was playing all the way down at A-Ball, three steps from the majors. Sure he put up big stats, but the competition level was well below his skill level at the time. That’s what we call a swing and a miss by Topps.

Sticking with the catchers, Ratliff was just 18 years old in 1962, which explains why he had barely any minor league time. Just like Plaskett, he played ten games in 1963. We then fast forward to 1970 because that’s the next time Ratliff played in the majors. He ended up playing 145 big league games over four seasons. This would be strike two, though I’ll say it was a foul ball, since Ratliff was in the majors as a teenager, so that was a pretty good reason to include him on a Rookie Stars card.

Marcelino Lopez and Ratliff have a lot in common. Both debuted in the majors at 19 years old in 1963, and both played their final big league game in 1972. In between those seasons, Lopez did a much better job. In fact, he looked like a great choice in 1965 when he went 14-13, 2.93 in 215.1 innings for the California Angels. He threw 199 innings the next season, but it was a large fall from there. He ended up winning just nine games after his age 22 season and he finished with a 31-40, 3.62 record in 653 innings. This counts as a small victory. He was a star by age 21, he just didn’t pan out in the long run.

Lovrich was just 20 years old in 1963, so those stats you see were put up as a teenager. He was given a chance by the Kansas City A’s in 1963 and he posted a 7.84 ERA in 20 appearances. He was in the minors by 1964 and done with pro ball by 1965. You can see why he got the spot here, but those stats on the back were put up in Class-C ball, the equivalent of someone making the jump from short-season ball to the majors now. So I’m calling strike three here, but it’s unfair to harshly critique their choices. I’ve seen much worse choices that also didn’t pan out.

This card is not plentiful on Ebay. Just 20 examples are currently up and they range in price from $8 for a really low grade example, to $99 for one that is graded PSA 6 (that’s the one I used for this article). There are three lower priced ones currently up at the time of this writing, but they are auction formats and they will be completed before you read this article, so you can check the completed Ebay auctions for a better price range. The current completed auctions show 15 sold in the last three months and they range from $6 to $20.