Today’s Card of the Day article in a first I believe. We haven’t included any cards that have game used memorabilia included on the card, at least that I remember. Today is the 47th birthday of Jason Kendall and while scrolling through card choices, one of his cards really caught my eye. Unfortunately he was pictured on the Oakland A’s on the card, but it convinced me to find a game used card to show here. I’ll admit that this one wasn’t my first choice, but that’s only because I couldn’t find good front/back scans for the first three cards I looked at before settling on this one. Kendall was a good player during the height of the game used card era, so he has a lot of options. This particular card is from a 2002 Upper Deck set called the Diamond Connection, and the card is called Big League Heroes. 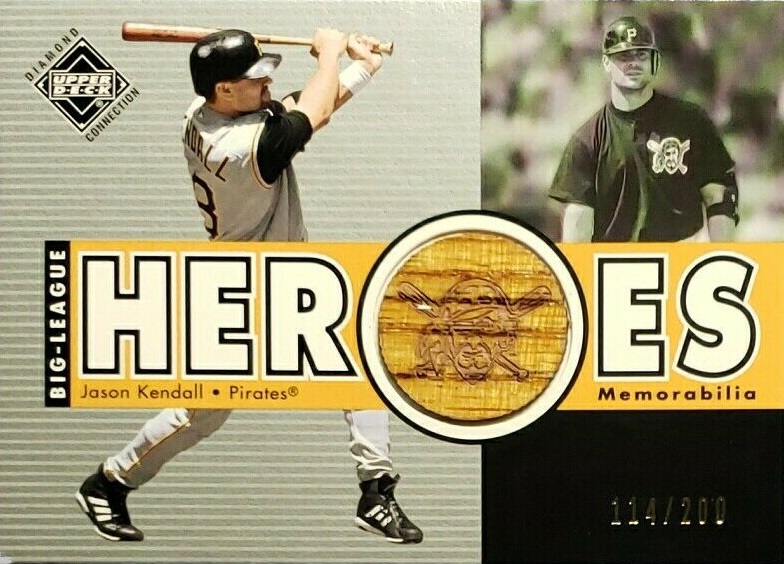 The 2002 Upper Deck Diamond Connection set was a trial run by Upper Deck, which I guess didn’t work because they never brought it back. It included a lot of game used memorabilia on cards. This particular one had a piece of Kendall’s bat with a Pirates logo later stamped on it. It’s interesting how they chose to size the wood chip here. It’s supposed to be the “o” in heroes, but they made the bat fragment bigger than the other letters, then also put the “o” around it, so it’s just awkward looking with “her” and “es” on either side much smaller. Other than that, I really like the look of the card, with two photos and the use of Pirates colors, plus the team logo stamped on the bat was a great idea. As you can see in the bottom right corner, this card is numbered to 200 examples, with this one pictured being #114. 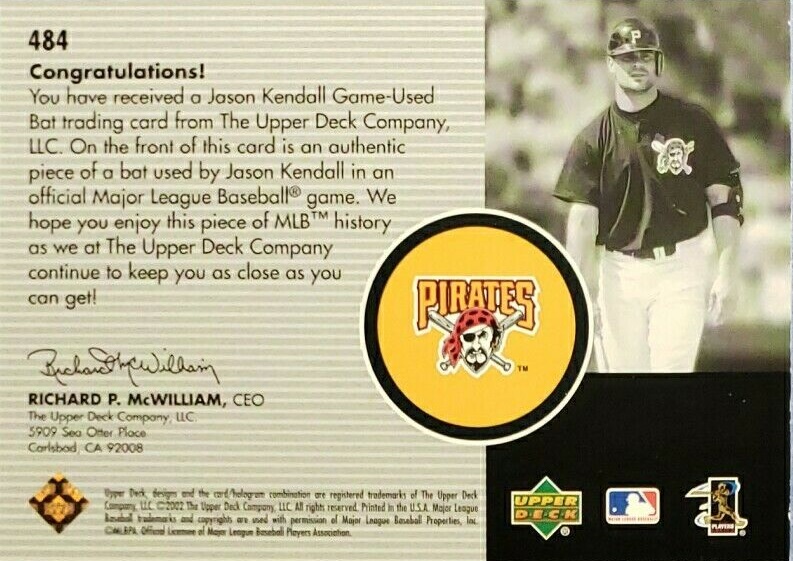 The back lets you know what you’re getting with a congratulations letter from Upper Deck, which was apparently written by the CEO of the company. This piece on front is from an actual game used bat by Jason Kendall. The piece they cut up was so small that they were able to make numerous cards from one bat, and that’s not just the 200 copies of this card, that also includes other cards. In fact, I counted eight different game used bats cards from Kendall that were produced by Upper Deck during just the 2001-02 seasons.

The back here adds a third photo of Kendall…though not really. For some reason they used the same photo as on the front, they just cropped it different. I like the usage of the team logo here again, always gets bonus points from me.

There are only four options for this card on Ebay right now. That’s not surprising as only 200 exist and I’m sure the rest are buried in collections, or possibly for sale with dealers who don’t have them listed on Ebay. So your choices are paying $12.74 (it has a best offer option), paying $9.50, with no best offer option, paying $8.44 (another best offer, though much of the cost is shipping) or paying $5.99 with no best offer option (I’d choose this one). If you just want a Jason Kendall bat card, then there are plenty of choices besides this particular one and two of the other options have cheaper examples up right now.