Today’s Card of the Day features Pittsburgh Pirates third baseman Aramis Ramirez on a 1998 Topps card along with two other prospects. Topps has had some shaky prospect picks over the years, but they provided a direct hit on this card. Along with Ramirez, they also included first baseman Sean Casey of the Cleveland Indians and shortstop Alex Gonzalez of the Florida Marlins. If you’re scoring at home or alone, that’s three prospects out of three who appeared in at least one All-Star game during their career. So on the 43rd birthday of Aramis Ramirez, here’s a look at the 1998 Topps #488, which features the then 19-year-old Pirates minor league prospect.

Going into 1998, it didn’t seem like there was a great chance to see Ramirez in the majors that season, unless it happened in September. However, he was a top prospect in their system because at 18/19 years old (mid-season birthday), he hit .278 with 29 homers, 114 RBIs and 80 walks for Lynchburg, the Pirates High-A affiliate at the time. He had no experience above High-A, so there were still two levels to conquer before he took the step to the majors. The Pirates eliminated one of those steps by skipping him over Double-A. Even though he didn’t dominate at Triple-A, they had him in the majors after only 47 games. The rush job was exciting, but it didn’t pay off. He was in the majors in 1998, but he didn’t have his first big season until 2001.

For baseball card collectors, they were getting someone who debuted in the majors before his 20th birthday, which made this a desired card at the time. It’s crazy to think that Ramirez reached his potential eventually and had a great career, but his cards don’t have any value now because he fell well short of having a Hall of Fame career. The same could be said about Sean Casey. He batted over .300 five times with the Cincinnati Reds, he was a three-time All-Star and he showed some power during the early parts of his career. He finished with a .302 career average and he was extremely popular as a player. Two players of that caliber on a rookie card should add some value due to the desirability, though Topps prints a lot of cards and not many collectors are going after 1998 sets, at least not one-by-one like older sets. Gonzalez was an All-Star in 1999 and he played 16 years in the majors, getting into 1,609 games. He was a regular for the 2003 World Series winning Marlins, and he was a strong defensive shortstop until late in his career. He’s not at the same level as the other two, but he’s still better than about 97% of the players who make it to the majors. 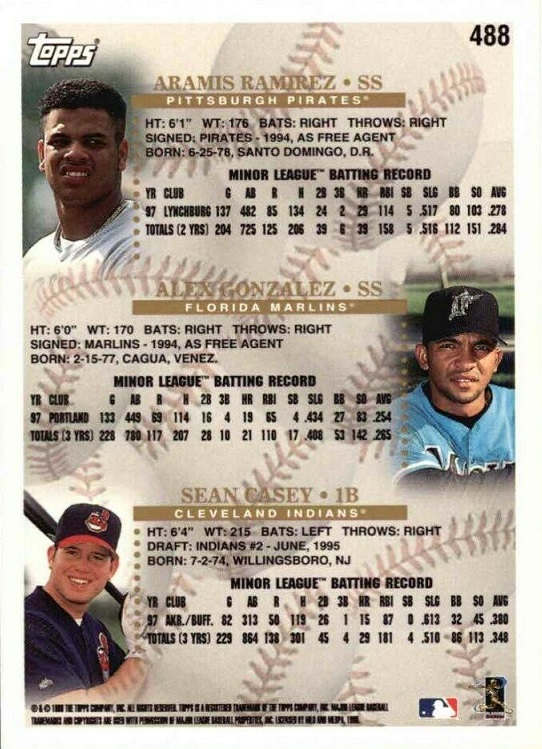 The back adds a second photo for all three players. They also squeezed in their 1997 minor league stats in 13 categories and their career minor league stats. Casey was the only one who had any big league experience at the time this set was released. He played six games for the Cleveland Indians in 1997. On March 30, 1998, he was traded to the Cincinnati Reds. So many collectors were getting his cards in packs after he was already on a new team.

The photos here look like a progression of being forced into a card photo, which is basically my same reactions to every photo request from my family. Ramirez is clearly not excited about it, showing the same look I always try to hide. Gonzalez looks like he’s saying just get this over with (been there), then Casey was told by the photographer that he has all day, so smile big or we wait. If you know anything about Sean Casey, there was no necessary waiting threats given to get him to smile, he’s probably smiling right now as you’re reading this article and he knows nothing about it (the article, not the smile).

This is a common card despite the All-Star power from the three players on one card. You can grab this card for about $3 delivered off of Ebay. There’s also a Chrome version that goes for a little more, plus one very interesting card. Someone has an autographed version with the signatures of all three players. There’s also one that is only signed by Ramirez, but the three-player signed card has to be extremely rare. That is being sold for $35.20, but it has a “make offer” option, so you can get it at least a little cheaper.