Jim “Mudcat” Grant, who pitched for the 1970-71 Pittsburgh Pirates, recently passed away at 85 years old. Except for a team issued set, this is his only option to include him in this series unless we chose a card showing him on another team, which would sort of defeat the purpose of a Pittsburgh Pirates Card of the Day series, but I’m willing to make the odd exception here or there. Fortunately, we didn’t have to make an exception because Topps included Grant in a late series of the 1971 Topps set. That’s my favorite set from the 70’s, so this probably would have been my choice even if there were other options. Today we pay tribute to a man who won 145 games in the majors and was a two-time All-Star during his 14-year career, with today’s Card of the Day, 1971 Topps #509, Jim “Mudcat” Grant. 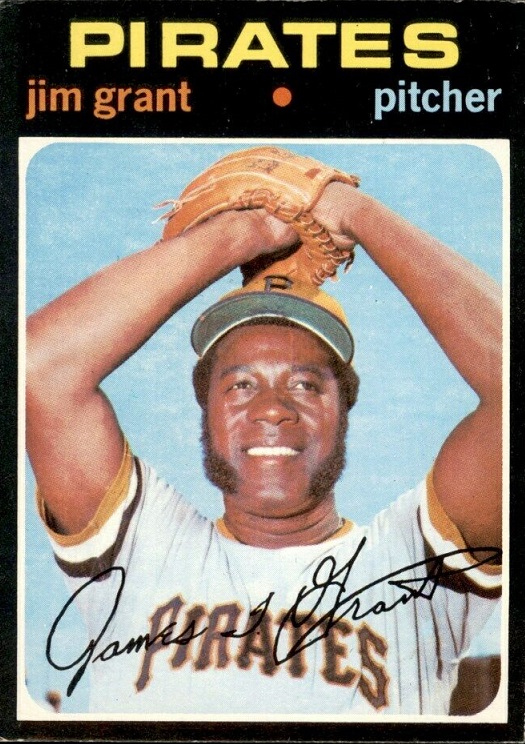 Topps didn’t always use new photos for players during this era, but you know when this picture was taken. Grant joined the Pirates on September 14, 1971 and remained with the team until August 10, 1971. He’s in the late series here, card #509, so it probably means that this is a 1971 Spring Training photo. If it was a low number card, then it would have had to be taken in 1970 for the card to be released that early. A lot of times when a veteran player would join a team late, you would get a close cropped photo of their face with no hat, so you couldn’t tell that they were actually pictured with an earlier team. It was a trick of the trade by Topps, so they had something available for every player. The other option was just major airbrushing, which sometimes turned out awful.

I love the black border design of the 1971 set, even though that makes it a very condition-sensitive set for collectors. The Pirates across the top in big yellow letters adds to the look. The Pirates uniforms from the era always look good and help the eye appeal of the set. I like the facsimile autographs on cards, even if in this case, it looks nothing like his baseball autograph. Anything you see from him now either has Jim “Mudcat” Grant or just Mudcat Grant. I have two autographed photos from him and both are signed with his first name/nickname. 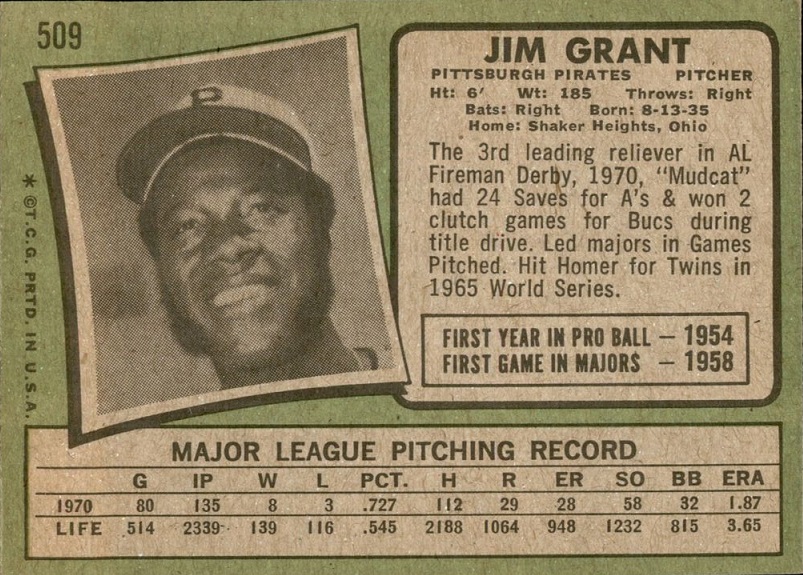 If you collected cards back in 1971, you weren’t used to seeing pictures of the players on the back of the cards too. Grant’s famous nickname didn’t make it to the front of the card, but it’s here on the back in the little bio section. Topps chose to include just one year of stats here, plus the lifetime numbers. They were already including multiple years of stats before this year, sometimes including minor league numbers as well, so this was a bit different. I’m not sure if it was greeted warmly by fans used to seeing stats, but it did last just one year. In 1972, the full stats returned. Grant was near the end of his career, but he led the majors in games pitched in 1970. He didn’t get credit for leading the league though because he was sold from the Oakland A’s to the Pirates in September and he was surpassed by Wilbur Wood for the American League lead. You don’t often see someone lead the majors in a category, but not the league.

Here’s a little hint on Ebay for players like Grant. Not everyone selling cards know that his nickname is Mudcat and they just see “Jim” on the front of the card. I think I mentioned this one time, but I saw the name Jim Grant for the Pirates and it didn’t click for about two minutes that they were talking about Mudcat. I knew his name, but when do you ever hear him being referred to just as Jim Grant? Anyway, searching for a 1971 Topps Mudcat Grant resulted in 19 auction listings. Searching 1971 Topps Jim Grant resulted in 54 auctions! That difference astounds me, and some of those results from each group are the same, so it’s not 73 different auctions for this card, but there are 35+ that don’t even mention Mudcat. The highest priced ones are about $30 delivered and they (two of them) are graded as an 8 (one is PSA, one is BVG). You can get this card for as low as $2 in decent condition, but you might want to go a touch higher because those black borders really highlight the damage to any card.