Today’s Card of the Day is another one that originates from the June 19th This Date in Pittsburgh Pirates History article. I mentioned yesterday in the Jerry Reuss Card of the Day article that I already had an article scheduled for June 19th, so I had to push a Reuss feature in this series back one day. He shares a birthday with another great Pirates pitcher, so here we are again, this time looking at the 1934 Goudey card of Bill Swift. This is the first time here for Swift in this series and it’s also the first time for the 1934 Goudey set, a very interesting set that I should have looked at much sooner. Let’s get right into it. 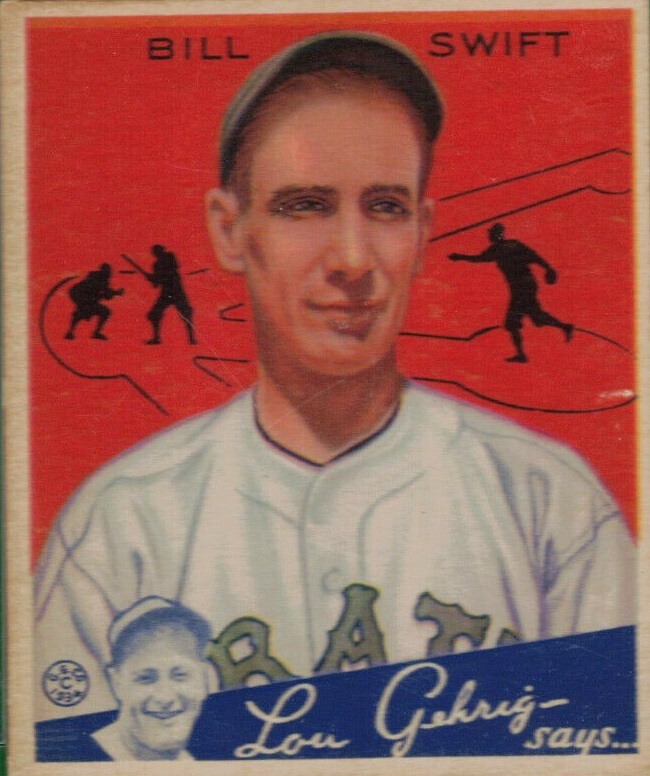 The cards in the set have various background colors and also various baseball scenes in the background. The batter in that particular scene looks like he’s afraid to get hit and I don’t blame him, that pitcher is about 15 feet away. At the bottom of the card, you’ll find what really makes this card set unique. All of the cards in the set had a picture of the great Lou Gehrig, who was near the middle of his amazing Hall of Fame career. Next to Gehrig’s picture, the cards have “Lou Gehrig says…”. The dots were there to tell you to turn over the card so you can read what Gehrig says about the players. I’ll let you know now that Gehrig’s words are written like a short biography for the individual players and they read like someone else wrote them and the company just used his name to help sell cards…they read exactly like that.

Swift had a strong run for the 1932-39 Pirates, but he isn’t pictured in many sets during that time, so you don’t have many choices when it comes to getting a card for him with the Pirates. This is one of the more popular ones, but there are also some with real photos, which might be more appealing to you. 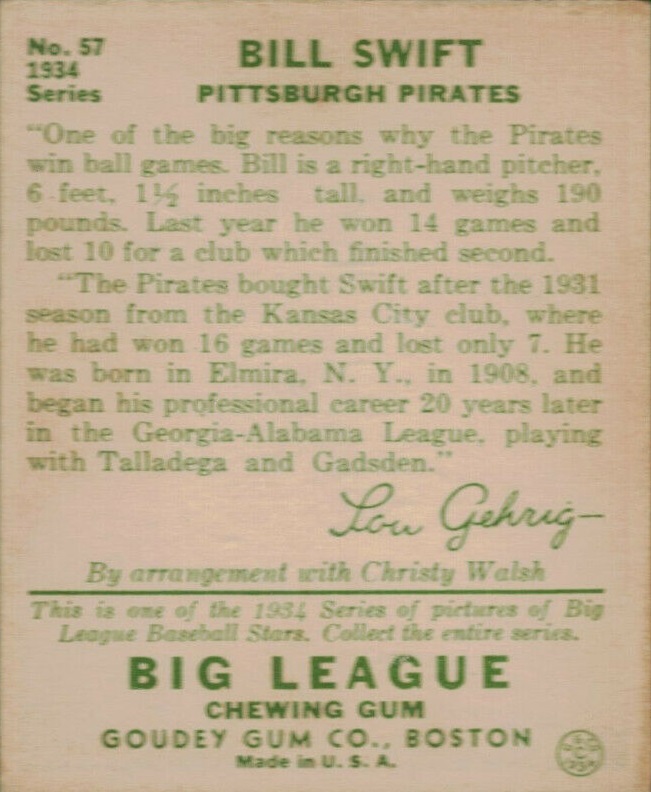 The back tells you about Swift, starting with his size, then his pitching performances during the 1933 season. The funny thing here is that a 14-10 record also describes his 1932 season, and the Pirates finished second in both years, so “Lou Gehrig” could have been looking at the wrong stats and still got everything correct.  Not so fast though, because the second part does have an error. Swift did not play for Gadsden and Talladega in 1928, he was with three other teams that year, which was his first season in pro ball. Apparently, “Lou Gehrig” had him mixed up with another pitcher named PK Swift, who pitched for Gadsden/Talladega that year. He also wasn’t born in Elmira, NY. That also might be describing the other Swift, but his bio information online is lacking everything except his pitching line from 1928, so I can’t be sure.

This card is somewhat plentiful on Ebay, especially considering its age. There are currently 15 auctions up for this card, plus three reprints. The reprints of this set have white borders/white backs instead of off-white, plus the word reprint is written on the bottom of the back in small print. The prices on the 15 auctions range from a PSA 7 for $220, down to $27.50 for a well-handled ungraded card. There have been 13 sold auctions on Ebay in the last three months and seven of those went for less than $27.50, so waiting for an actual auction (as opposed to a buy-it-now) is probably the way to go if you’re somewhat patient.