Today’s article is a special guest submission from Pittsburgh Pirates collector and fan, Jarrod Ranone. You have probably see that name here before if you follow the history side closely. He has submitted two Card of the Day articles already and two Pirates Memorabilia articles as well. This article here is a combination of both. He tells a great story about the time he wrote a letter to Pirates great Frank Thomas, the original Big Hurt. He also tells how he added a 1954 Bowman Frank Thomas to his collection years later. Both items are pictured below, so let’s get right into the stories.

“Did you know there are two Frank Thomases?”  This was a question asked to my ten-year-old self in 1997 at sports memorabilia stand at a flea market in southern Florida.  We were visiting my gramma who came across this stand in her many trips.  Knowing her grandson (favorite grandson might I add) was addicted to baseball cards, she kept note and this was one of the first stops she made with me.  This was definitely a power move to preserving “Grandmother of the Year,” but I digress.

Did I know there were two Frank Thomases?  The owner of Dale’s Sports Cards asked me this question.  Well, like any ten-year-old, I lied, said yes, and hoped there were no follow up questions.  Well there was and I was caught.  Being obsessed with baseball and cards, of course I knew who, I thought, was the only Frank Thomas.  I watched “The Big Hurt” demolish baseballs for the White Sox almost daily on SportsCenter every morning.  But who was this other Frank Thomas?  Well I was about to find out.

I don’t remember exactly how it was brought up in conversation about the two Thomases.   I like to think that it was the owner identifying myself as having such a keen knowledge about baseball and cards.  Realistically, it was probably because it was the third or fourth hour I was at his booth and I was wearing a Pirates hat.  Dale, explained to me that there was a former Pirate by that name and in fact he was an avid baseball card collector as well.  Dale gave me the SparkNotes version (do people still use that) of who Frank J Thomas was/is and how an unfortunate fire destroyed most of his collection. Thomas collected Topps baseball cards and had complete sets for every year of production.  So Dale and others were helping him build his collection back.

At that time, I never met a current or former major league baseball player.  So even meeting someone who knew one personally was mind blowing to me.  I kept asking questions about Thomas and the owner said that he thought Frank would appreciate a letter from me so he gave me his address.  I started writing the letter that night and mailed it the next day, while still on vacation.  There was so much that I wanted to know.  Being an aspiring baseball player, I wanted to ask him for advice.  A couple weeks later, I received a letter back.  I was beyond excited and read the letter repeatedly.  The letter expressed his gratitude for my interest and eagerness to learn.  He gave me advice that really seems simple but is true in being successful in any sport.  Simply, practice like you play.  Treat every practice as if it were a game and give it your full attention and effort.  Learn the fundamentals and get good at the little things.  I still have the letter today.

Frank Thomas, who recently turned 92 years old, was born in Pittsburgh and signed with his hometown team in 1947.  Prior to his baseball career, Thomas spent 4 ½ years attending a seminary in Ontario, Canada in hopes to becoming a Roman Catholic priest.  The three-time all-star spent his first eight out of sixteen years with the Pirates.  While also playing for the Cincinnati Reds, Chicago Cubs, Milwaukee Braves, New York Mets, Philadelphia Phillies, and Houston Astros.  He posted a .266 career batting average, hit 286 home runs, and drove in 962 runs in 1766 career games as a corner infielder and outfielder. 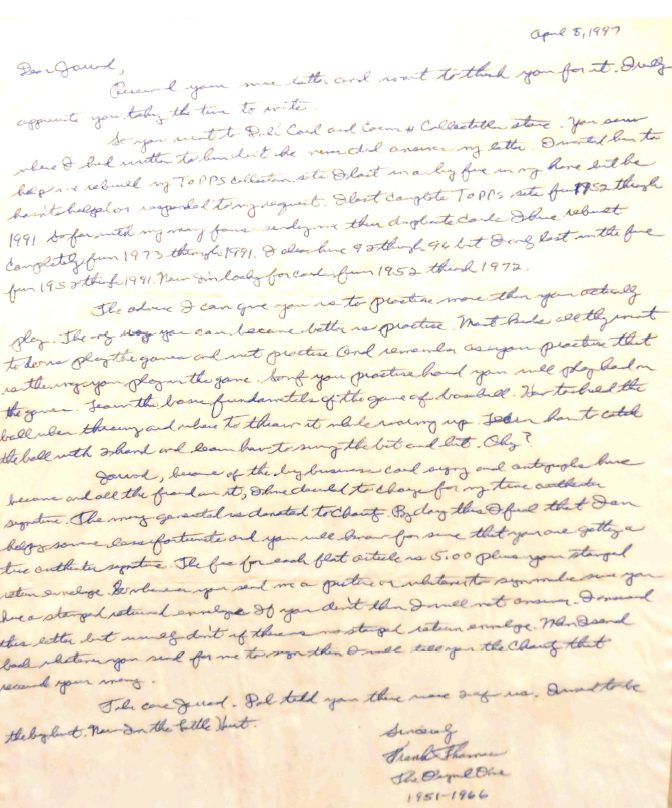 Jump forward about 20 years and still collecting cards as an adult, I was going through a vintage card bin and found a rough card of a familiar name.  The 1954 Bowman while rough held sentimental meaning to me so I had to have it.  I believe I spent $5 on it and received an eye roll from my wife (those are free in case you were wondering).  When I got home, I discovered this was his rookie and, in my excitement, got more eye rolls I’m sure.

The front of the card features a familiar baseball card portrait of Thomas holding a bat.  His facsimile signature is in a rectangle at the bottom left.   However, what really attracted me to the card was that it was not a picture but a drawn likeness.  The back of the card features a nice paragraph about Thomas’ career up to that point along with the previous year’s and career statistics.  The card also features random trivia in case you were wondering, “Who invented Ladies Day?”  The card is number 155 out of 224 in the set.

The 1954 Bowman set measures 2 ½ “ by 3 ¾ “. The cards were simple in design with no action shots which caused some criticism in the hobby.  The cards were distributed in seven card packs for a nickel and one card penny packs at the time of release. They were broken in to two series (1-128 and 129-224).  Prior to the release of the set, there was a legal ruling that individual players contracts determined which card company could use their likeness in their product.  Jackie Robinson, Monte Irvin, Warren Spahn, among others were not included in this set.  Ted Williams was included in the set originally but was then determined to have an exclusive contract with Topps and his card was pulled and replaced with teammate Jimmy Piersall. The set also has several variations due to different statistical errors listed.

The Frank Thomas 1954 Bowman can be purchased for anywhere between $15- $135 plus shipping.  The condition of the card is what determines the price.  While I did not strike investment gold with my purchase, the card is one of my favorites in my collection as it reminds me to always “Practice like you play.” 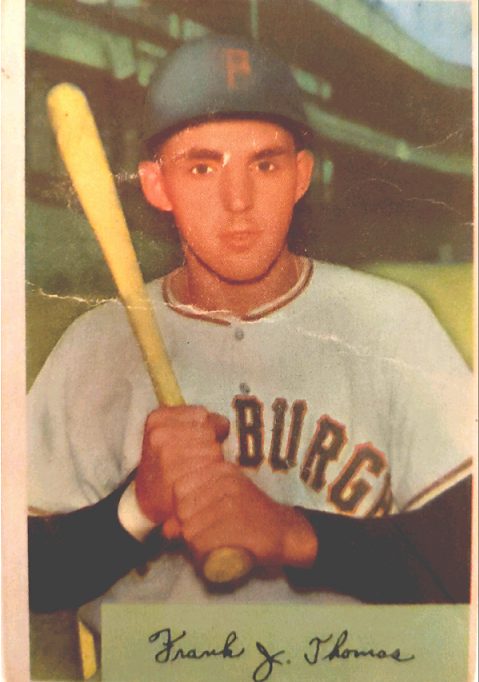 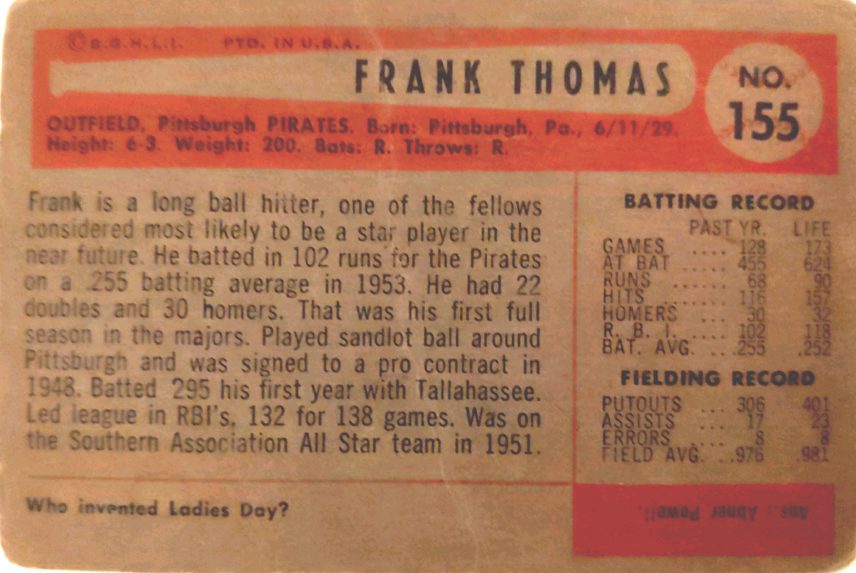