Today’s Card of the Day is from a subset of the 1959 Topps set and it features Pittsburgh Pirates pitcher Bennie Daniels. I have used 1959 Topps cards for this series three times, but this is the first one I’ve used in ten months. Even with three other examples, this one is completely different than the others. Daniels was named as one of the Sporting News Rookie Stars of 1959. There were 31 cards in that subset and Topps put them in alphabetical order, using card numbers 116 through 146. Daniels was one of two Pirates in the subset, alongside outfielder Jim McDaniel, who never played in the majors. Daniels already had two cups of coffee with the Pirates, pitching 34.2 innings over the 1957-58 seasons. He was still considered to be a rookie though, so here’s a look at his 1959 Topps card, #122 in the set. 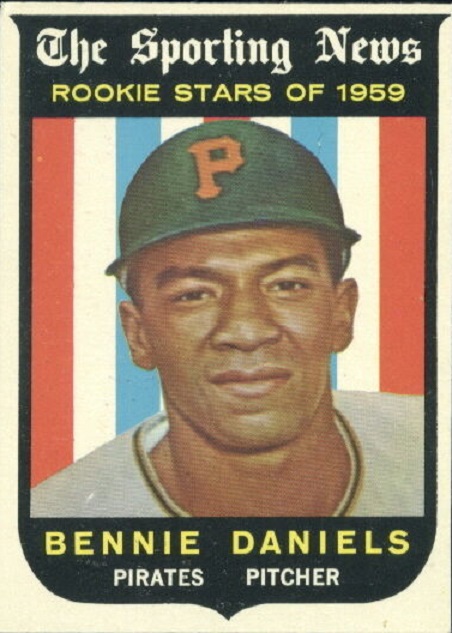 The 1959 Topps set used a circle for the photos of the players, with a solid background of various different colors around the photo (all cards used just one color, but many colors were used in the set). They also had a small white border around the photo, similar to what you see here in size. The names were printed in big letters at the top. That’s quite different looking than what you see here. The subset of rookies are all posted in a shield with red, white and blue backgrounds. If you didn’t know ahead of time, you could think that a common 1959 Topps and one of these Sporting News rookies were from different years if you saw them side-by-side. 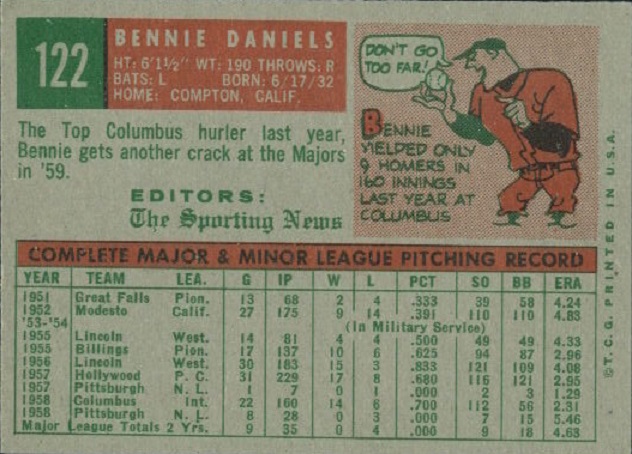 The back has a nice Christmas feel to it with the red and green colors. I’m surprised that Daniels isn’t more well remembered judging by the drawing of him in the cartoon above. He had such a strong upper body build, which you can’t tell from the portrait type photo on front. His legs were so short though and his feet were flat, giving him an odd look as he went into the windup for his delivery.

I like that they included his full minor league stats here, including the note that he served in the military during the 1953-54 seasons. As you can see by the stats, he had three pretty good seasons in a row in the minors, the last two at the upper levels of the farm system. The only downside here as far as being a potential rookie star is that he was a bit old for a prospect at that time. He turned 27 early in the 1959 season. Daniels struggled with the Pirates during that 1959 season, posting a 5.45 ERA in 100.2 innings. The next year didn’t get any better, with a 7.81 ERA in limited work. The Pirates traded him to the expansion Washington Senators for 1961, where he saw plenty of work over the next five seasons, throwing 821.1 innings total. He didn’t wind up becoming a star, but he put together a decent career in the majors.

This card is a good example of supply and demand. The 1959 Topps set is somewhat popular with collectors. Not one of the best from the era, not the worst either, and even the worst Topps set from that time is still considered to be somewhat popular. There are a lot of people selling these cards though and not as many buying. There are 30 sales in the last three months for this particular card, which is a decent amount compared to most cards shown here. However, there are over 150 active auctions for this card. That keeps the price down and gives you plenty of choices no matter what condition you desire. There are numerous auctions under $3 delivered. On the other end of the spectrum, there are two graded PSA 8.5, which are selling for $128 and $120. If you want a high grade, I’d suggest the PSA 8 for $34 delivered. That’s quite a price bump for a 1/2 grade. There are also seven autographed examples available and you can get a nice one in the $20 range.