I’m going to apologize in advance if you’re one of the two fans of the 1977 Topps set. Out of all of their front designs ever, this is one of my least favorite ones. I hesitate to commit to least favorite only because I haven’t looked through all of them just to be sure. Also, the 1990 set is just awful, and deserves careful consideration for the worst. The 1977 set just extremely boring and with the mediocre photo quality of the day, there’s almost nothing appealing about the set. However, this series isn’t about just showing my favorite cards. If it was, you would have already seen every Old Judge card, every T206 card and every Dots Miller card.

I also need to apologize to Bill Robinson fans, who I’m sure far outnumber 1977 Topps fans. I noticed the other day that he has never been used in this series, which is a massive oversight on my part. I only noticed because I was searching to see if I ever used Don Robinson and my search term “Robinson” turned up just one previous article, the one where I help explain the differences between Jeff Robinson and Jeff Robinson. So I did a Don Robinson article that day and today we do a Bill Robinson article, exactly 39 years to the day that the Pirates traded him to the Philadelphia Phillies. So what we have here is a combo of a beloved player and an unimaginative set. Today’s Card of the Day is #335 from the 1977 Topps set, featuring Bill Robinson of the Pittsburgh Pirates. 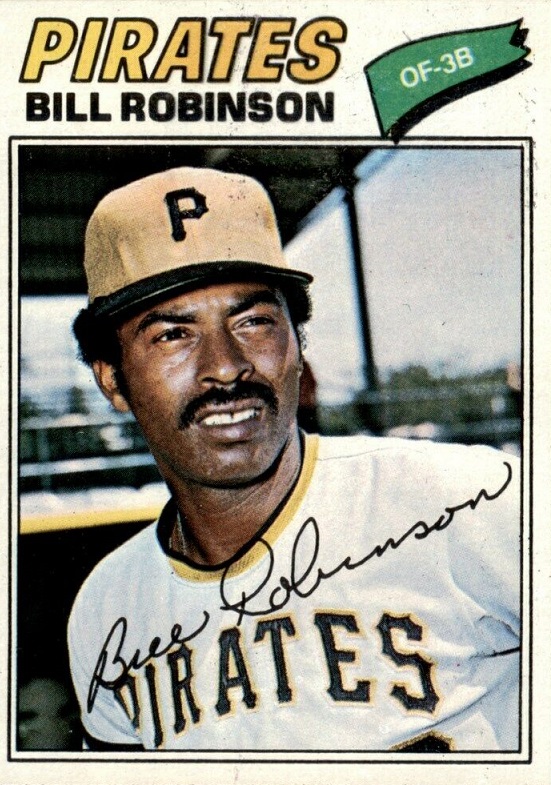 As you can see on front, Topps didn’t put a lot of thought into these cards. They used a white border, which was fairly standard except the first half of the 1970s. Then they had a plain frame around the photo, followed by more white and another blah frame around the photo. The photo quality in this set is really low too, which hurts the set. I like that the Pirates name had yellow/gold writing up top, but that’s about it. Topps used action photos in the 70’s for the first time and then this set had absolutely zero real action photos for the Pirates, though maybe Dave Parker qualifies. For some reason their photo of him is in the batting circle during a game, while everyone else has a staged photo. 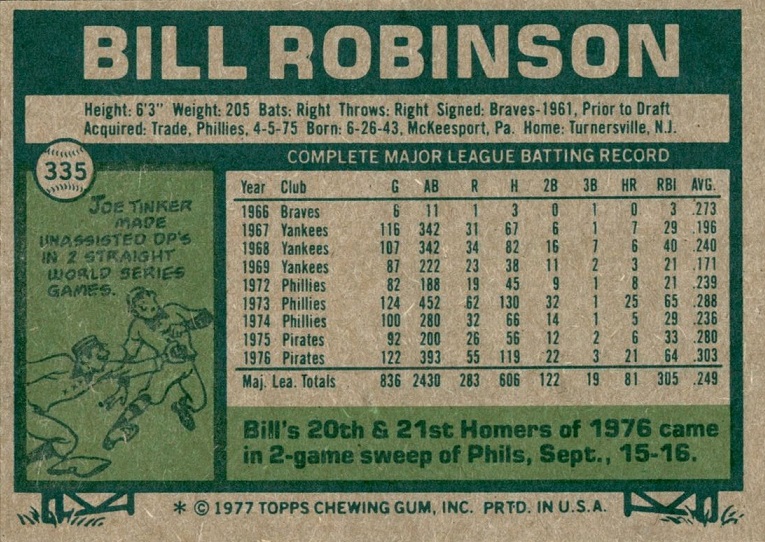 I love the cartoon here, though the jersey styles don’t match up too well. You have an 1880’s player tagging out an early 1900’s player. That most certainly doesn’t resemble Joe Tinker even remotely, nor does it look like a uniform style that he wore during his career. The base runner would be more correct, but the cartoon references a defensive play from the great Hall of Fame shortstop.

This card is about the halfway point of Robinson’s big league career. He had a nice 1976 season as you can see from the stats, but his best season was happening right when most collectors were opening up packs of these cards. He set career highs in all three Triple Crown categories in 1977, hitting .304 with 26 homers and 104 RBIs.

If you’re interested in this card despite the front design, then you’ll be happy to know that you have plenty of options on this new website called Ebay, where you can buy things such as baseball cards, and other baseball cards. There are currently 45 auctions for this card. The most expensive one is $40 plus shipping (has a make an offer option) and that one is signed by Robinson and authenticated. He passed away 14 years ago, so that was a somewhat limited time to get autographs out there for the collectors. He’s not a rare autograph though. In fact, there are seven other options for his autograph on this card and they go as low as $10. Assuming you want a plain ole card, the best price for a decent condition card that you’ll find is $1.75 delivered, from two different sellers. That’s a great price considering that many of the commons from more recent sets we talk about on here don’t have any listings under $2.