On this date in 1953, the Pittsburgh Pirates traded for outfielder Hal Rice. On this date in 1954, the Pittsburgh Pirates traded outfielder Hal Rice. That’s right, he spent exactly one year with the Pirates. Rice got himself on two baseball cards during that time, so the choices here were slim. I like the 1954 Topps card better, but I picked the Bowman card because of something that I saw while scrolling through Ebay. I’m sure you’ll appreciate the added bonus here, so let’s get right into today’s featured card, a 1954 Bowman Hal Rice. 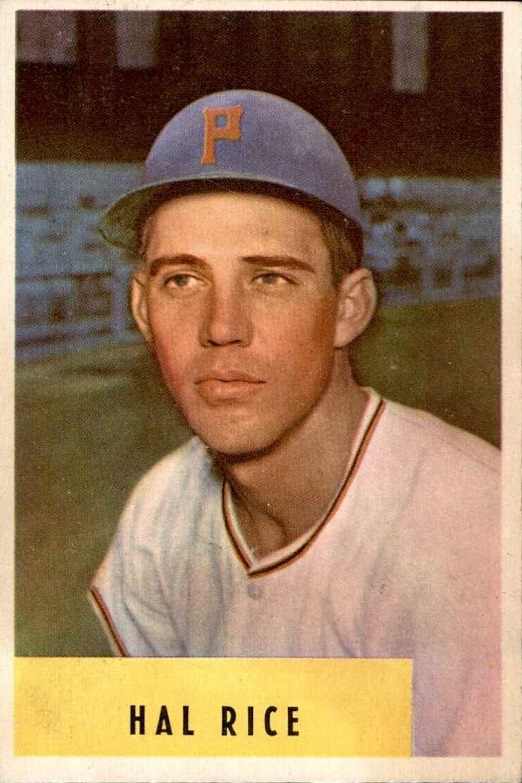 I’m sure at some point I’ll get to the 1954 Topps Rice card. The plan here is to just keep going as long as people are reading them. The Topps card is definitely the better looking of the two sets from 1954. The Bowman is just too basic of a design for me and the box for the name at the bottom is too big for only including the name. It feels like the team name and/or his position should be there too. I’m sure a few people will disagree with that assessment, the Bowman set does have its fans, but the Topps cards have a lot more going on and better quality pictures of the players. However, what the 1954 Topps Hal Rice didn’t have on Ebay is this… 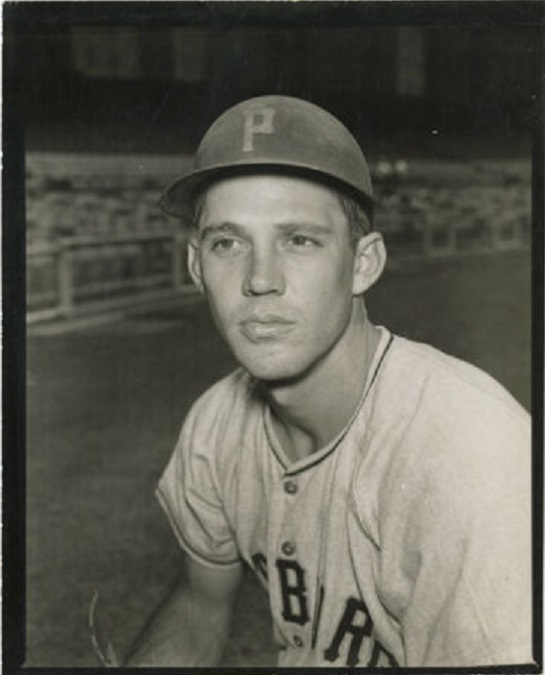 That my friends is the original black & white photo used for the 1954 Bowman Hal Rice card. It’s currently for sale on Ebay. What you see on the front of the card is a colorized version of a real photo. Notice that the yellow box for his name on the card blocks out what you can see in the real photo of the word “Pittsburgh” on the jersey. 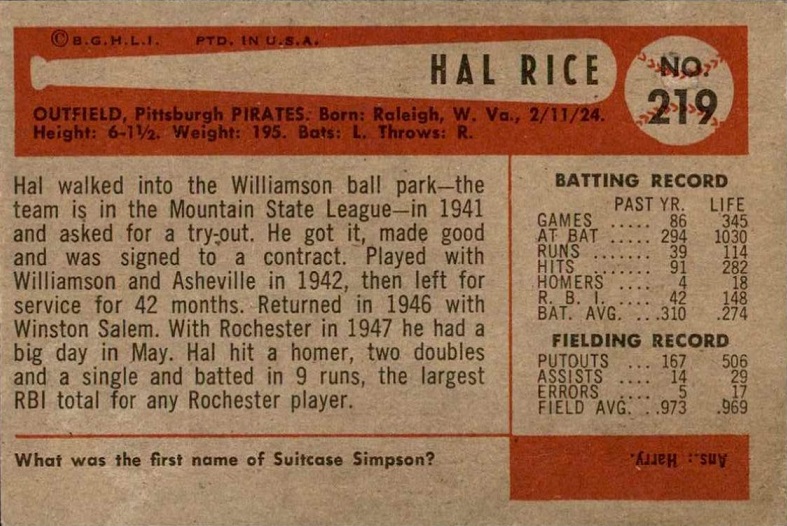 I really like the back of 1954 Bowman cards, but in a head-to-head competition with 1954 Topps, they are a distant second. The Topps back design from that year is one of my favorite back designs from the post-war years. I like the use of the bat here though for the name, along with the baseball for the number. These cards have a nice little bio for the players. The stats are limited, but you didn’t get any extra on the Topps cards and the fielding stats adds something different.

The trivia question here is an interesting note. You can often read that Harry Simpson got the name Suitcase because he moved around a lot during his career, except most of the moving that people quote happened after this card was printed. He played for one team in the Negro Leagues early in his career, then signed with the Cleveland Indians and played for them for three seasons (up to that point), plus two years in the minors. There was nothing odd about his progression in baseball for the time, but after 1954, he played for for five different big league teams in five years, including the 1959 Pirates. The real story is that he wore large shoes and it reminded a sportswriter of a cartoon character of the day named Suitcase. It had nothing to do with him moving around a lot.

This card is plentiful on Ebay, with 54 examples currently up (nice number considering it’s a 54 Bowman). You can grab one for as low as $4 delivered, but the grade isn’t that great. There are others in similar condition for slightly more. For just a few dollars more you can get a nice mid-grade example. You can get a PSA 7 for $33.65 (with a make-an-offer option). A PSA 8 will run you $50, while the three highest priced examples currently up are also graded PSA 8. I didn’t look at the scans, but the difference in price is significant with two of the others. Some people think their card is nicer than a certain grade and they will price the card with that in mind. Some people just ask too much, so be sure to check the scans before buying.