This one might be a first for me here. I wanted to feature something related to the Pittsburgh Pirates first interleague game, which happened on this date in 1997. The hero of that game was Joe Randa, who drove in three runs for the Pirates in a 5-3 win. Randa wasn’t with the Pirates long, though he played during a time when there were too many sets to choose from, plus he came back to the team at the end of his career. So he has a lot of options when it comes to his first time appearing in our Card of the Day feature. I scrolled through Ebay looking at my choices and came across this card from 1998, called the Pacific Crown Collection set. It featured 450 cards for the base set, plus plenty of inserts and chase cards. This is the first time that I am writing about a set that I knew nothing about ahead of time, as far as I can remember. I picked one of the rare versions of this card mostly because the person had the best front/back scans available. 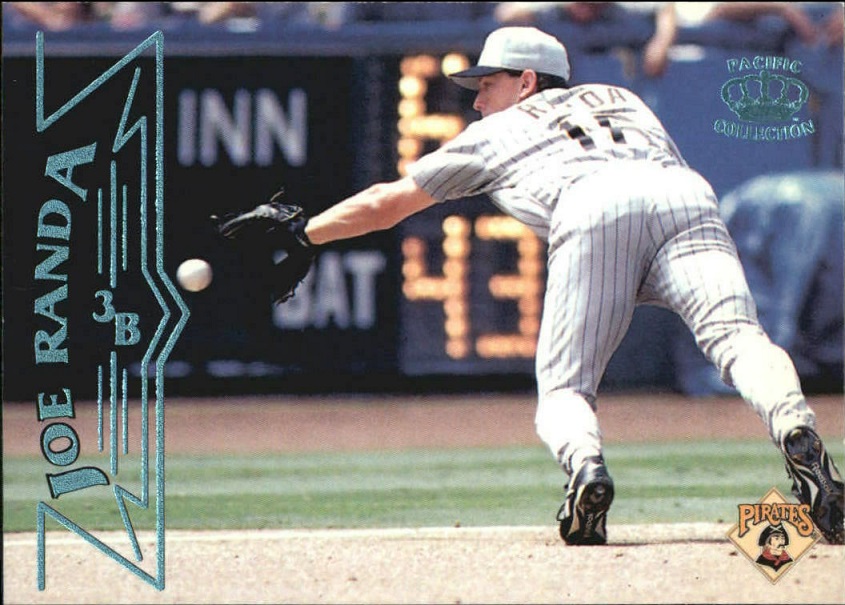 Note that the front of the card is the back of Randa (wait for it…). This card is called a Platinum Blue edition and there were supposed 67 Platinum Blue cards for each of the 450 cards in the set. The odds of getting one of these cards (not Randa specifically) was one in every 73 packs. These cards were sold 36 packs per box and 12 cards per pack, so you could buy two boxes of them and you wouldn’t be guaranteed to pull a single Platinum Blue card. They also had silver version, which came one per pack and a Red Threatt card, which was one-per-pack, but only at Walmart. If you haven’t realized yet, those are all colors and they reference the color of the writing for the name going bottom-to-top on the side. It’s a strange little design/writing decision from Pacific Trading Cards. I appreciate the Pirates logo on the front, it always makes things better. 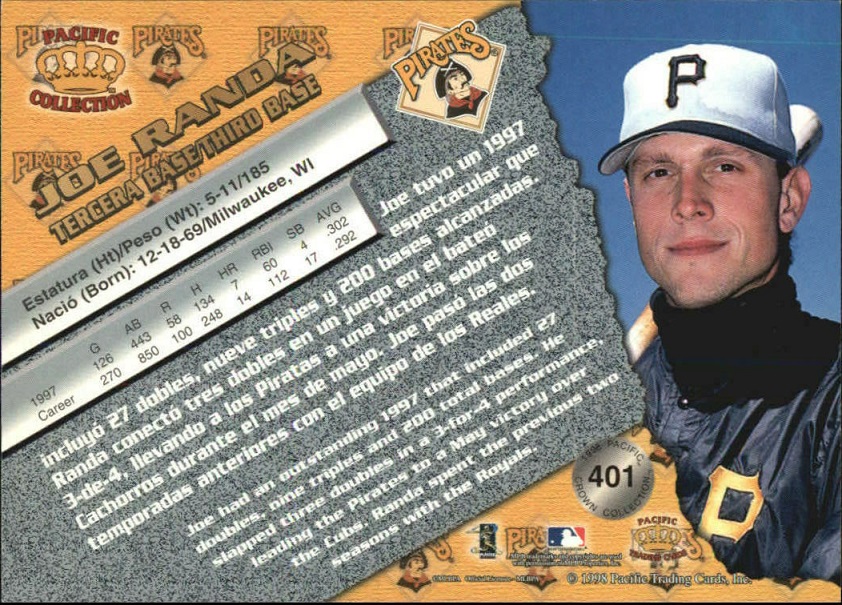 The back of the card features the front of Randa (did you wait for it?). One might say that there is a limit to the amount of logos you should have on a card, but I see parts or all of 12 Pirates logos and I would be okay with even more.  As you may have noticed here, these cards are in both Spanish and English. The set also has a subset for Latin American players, so it was a theme that year. Notice that this card is supposedly numbers to 67 copies, but they don’t number them individually like cards usually do now with limited print cards. So basically, we have to take their word for it. Finally, I’ll point out the cap that Randa is wearing. I’m not ashamed to admit that I really liked that cap and I have one right by my desk. I know a lot of people didn’t/still don’t like it. I am and was a fan.

This specific card is not easy to find, and a regular base version of this card is only slightly easier to find. Just seven Randa cards from this set are listed on Ebay. Four are the regular version, one is the red version and two are the platinum one numbered to 67. Assuming you want that version, you’ll either pay $7.49 or $7.10 delivered. The regular version can be had for just under $3. Happy collecting!