Today’s Card of the Day article features pitcher Dock Ellis, who threw a no-hitter on this date in 1970. He is shown below on his 1975 Topps card. That is a set that people either love or hate. If you look at that set and say “it’s okay”, then you are just lying to yourself. You secretly love it and you’re ashamed to admit it, or you hate it, but you don’t want to get into a fistfight over it. It’s a set that I should have posted here more than once already, just because of the controversy. I’ve only had it once though, and it was ten months ago when I pictured Ramon Hernandez on his 80th birthday. I guess that means that I’m doing a swell job of mixing card choices up here. We have only had Dock Ellis here once in 15 months, and that was three months ago on his date of birth (March 11th). Here’s his 1973 Topps card. The 1975 set seems like the perfect one for his personality, so here we go with our second look at Ellis and at the 1975 Topps set. 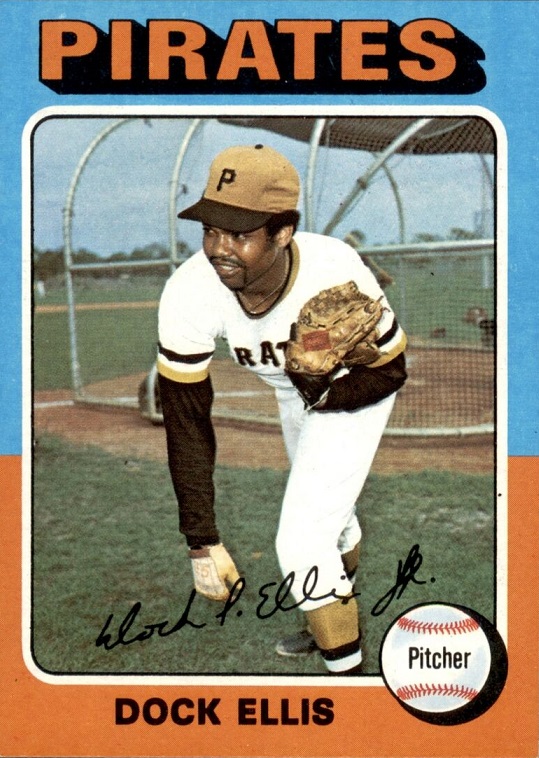 I have owned a 1975 Topps card of Ellis longer than I haven’t owned one, and I just noticed something new on it when I posted this link. In fact, I have two of them because I bought a 1975 Topps Pirates team set not long ago, and still didn’t notice. Look at his pitching hand in the photo…that’s a batting glove. Somehow I always missed that. I don’t think I ever noticed the “Jr” at the end of his facsimile autograph either. Anyway, this is a great posed action photo in that it almost looks like Ellis is coming out of the card. He got the blue and orange borders, which you can find on three other Pirates cards in the set, including the aforementioned Ramon Hernandez, the Pirates team card, and Jim Rooker. The borders have a lot of combo choices in the set, some are much better looking than others (an added qualifier for the love/hate process!).

Topps also made mini cards in 1975, which were exact replicas of the regular card, just smaller. I would include a scan, but you wouldn’t be able to tell the difference. The mini cards are much tougher to find and worth more. 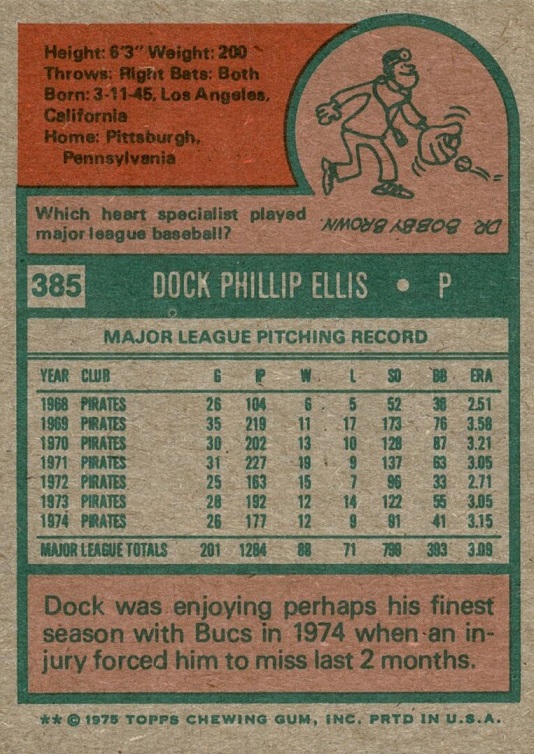 The return of the generic Topps man! Their gray man who has looked like no player ever appears again. Usually it’s the player on the front of the card who is represented by GGM (generic gray man), but this card shows a cartoon fact and that’s Dr Bobby Brown on the card, an infielder for the Yankees from 1946-54, who used a giant glove in the field and only had four fingers on his throwing hand. I like the back of 1975 Topps cards a lot more than the front, it’s probably the Christmas colors that do it for me, plus they are easier to read than some years in the 70’s. It’s interesting to see here that they only went with his big league stats and that left room for a nugget of info at the bottom about him being injured for two months. The fun part about that fact is that he pitched until September 11th, so he missed more like two weeks than two months. He had his hand broken from a line drive during that final start.

This Ellis card is plentiful on Ebay and well worth the cost. There are 57 auctions currently live as of the time of this writing. Seven of those auctions are for the mini version and the cheapest one is $4.50 delivered. The regular size card can be found for as low as $1.25 from one seller. The most expensive is just over $80 for a PSA 9, but the second highest priced one is $18, so that’s quite a steep jump in price. You should be able to find one in really nice shape for $5 delivered.