Today’s Pittsburgh Pirates Card of the Day celebrates a man born 73 years ago today, who spent the 1969 to 1973 seasons with the Pirates at second base. I picked the rookie card for Dave Cash, which also features outfielder Johnny Jeter, who played for the 1969-70 Pirates. This is the first time for Cash (and Jeter) in our Card of the Day series and his 1970 Topps card seems like the best place to start. 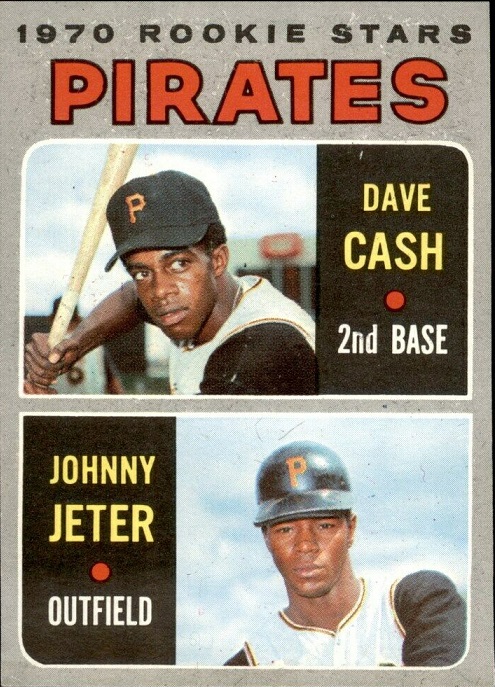 Topps had a nice design idea for their 1970 set. A gray border around the photo was a first for them. They used the Pirates colors here on the card and I always appreciate that added touch. Black box for the name and yellow letters (close enough to gold to work). When I was a kid looking through older cards, these type of rookie cards always appealed to me. I seemed to like them more if they had more players, but I’m sure the first time I saw this card I was impressed because it had to be at least a 25-year-old card by then and it featured a key player for a championship team. The 1970 set is one of my favorites from the 70’s, which was a wild ten-year period for Topps. They went a bit out there with their 1972 and 1975 designs and put people to sleep with the 1977-78 designs. My two favorites are the first two sets they put out, especially the black bordered 1971 set, though I would think that my top ten hasn’t ever been set. Sometimes that 1974 set just catches my eye right…I’ll save the rankings for another time. 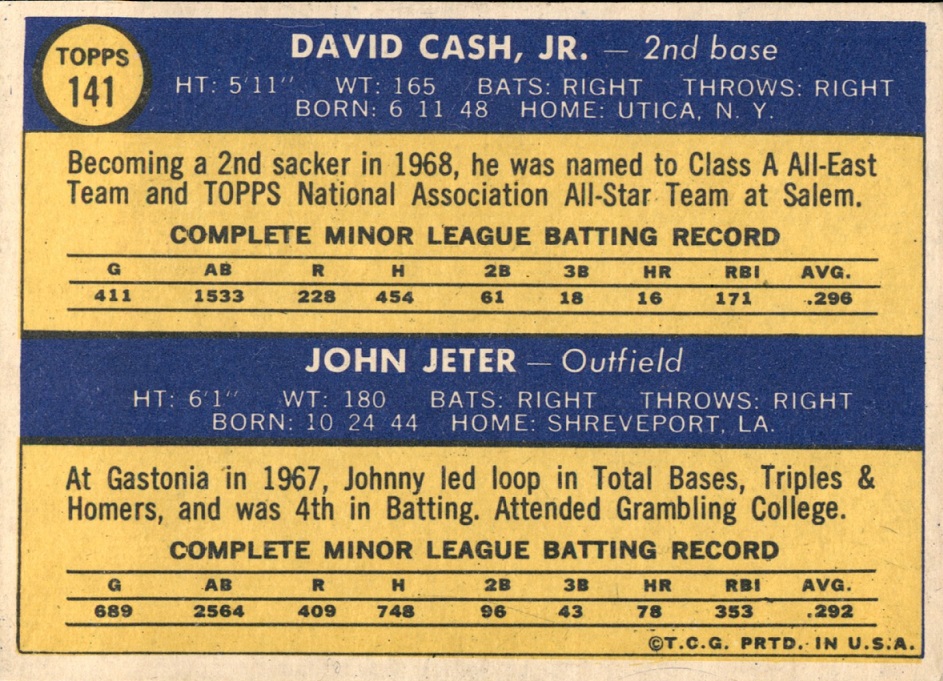 The back has just the career minor league stats for both players, even though they both debuted in the majors during the 1969 season. Cash debuted with the Pirates on September 13, 1969 and played 17 games over the final three weeks of the season, hitting .279 in 74 plate appearances. Jeter debuted on June 14, 1969 and played 28 games that season, though he only went to the plate 32 times. He started six games that year, seeing time at all three outfield spots.

The little bio section gives a brief reason why they were considered to be top rookie choices for this set. Jeter had a big season in 1967 and Cash had a big season in 1968. One thing to notice here is the age difference between the two players and that’s relevant with the bio facts. Jeter’s big season happened in A-Ball when he was 22 years old, in his fourth season of pro ball. Cash had his big season in High-A at 20 years old. It’s not a perfect system on how to judge prospects, but it worked out with these two players. Cash was better at a younger age and he turned into the better player in the majors. Jeter still spent six seasons in the majors, so he was by no means a bad choice by Topps here, even if he didn’t turn into a star. They picked a lot of players who missed the majors entirely over the years and even more who lasted 1-2 seasons. Jeter’s career would put him middle of the pack for Topps Rookie Stars choices.

This card is easy to find on the website called Ebay. The are currently 42 active auctions up, so you have your choice of condition. There are also a handful of autographed versions, though they are all only signed by Cash. Jeter is a very hard autograph to acquire apparently, as just a few items of his are signed and for sale on Ebay. Among those 42 auctions for this card, there are also a few O-Pee-Chee cards, the Canadian version of Topps. So you really have about 35 options if you want the card above unsigned. Those range in price from $73 for a PSA 8, down to a few that are low grade and around $3 delivered.