Today’s Card of the Day was one of my favorite recent sets because it is a tribute to one of my favorite early baseball sets. In 2002, Topps released a set that they called Topps 206, which was based off of the T206 set that was released in 1909. Even if you don’t know what that set is by name, I’m sure you’ve heard of the famous Honus Wagner card that sells for seven-figures from that set. The 2002 Topps set included cards that were the same size as the original T206 cards and it even included artwork for the front instead of photos, as well as the same tobacco brand ads from the early set. I went to Ebay shortly after the set was released and bought all of the Pittsburgh Pirates players, plus a few other players I liked, such as Barry Bonds, Carlton Fisk and Omar Vizquel. One of those Pirates players I got was infielder Pokey Reese and this is his card. 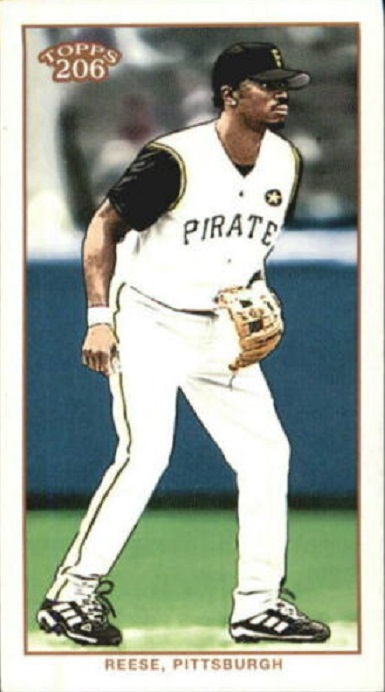 It’s difficult to tell by the scan, other than the width, but this card is much smaller than your average card that you get in packs today. That’s true of the original T206 cards as well, which were 1-7/16″ x 2-5/8″, compared to 2-1/2″ x 3-1/2″ for standard card sizes now. I’ll note that not all of the Reese cards in the set are the smaller size. Cards in this set came in a bigger size and are easier to find that way (see pricing for a breakdown). The T206 sized cards were inserts.

Besides the size, you can see the artwork for the card mimics the older cards and the setup is similar, just not the same color. The original T206 cards also had white borders, but the border for the photo was black and the writing is dark brownish color. Both sets had just a last name, unless there was a player with the same last name in the set, then they used an initial or full name in some cases. The name is followed by the city in both cases. If that city had two teams, it would let you know through American/National identifications. 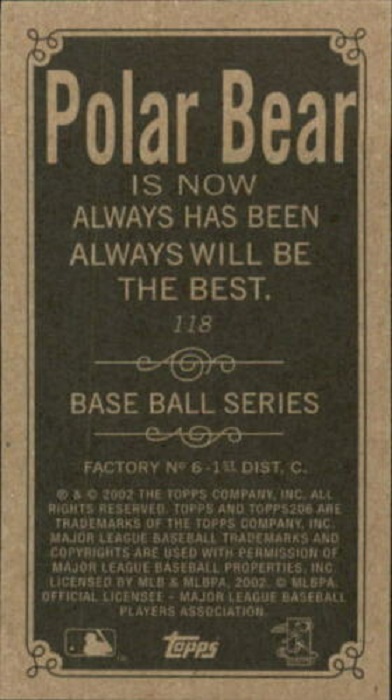 This is very similar to the regular T206, but also very different for some obvious reasons. Polar Bear is a popular brand back in the T206 set because people like the dark blue background, while most of them just have a plain off-white background. This obviously isn’t dark blue. Except for the color and letting you know that Reese is card #118 in the set, everything from the top down to the “factory” line mimics the original card. Then Topps went and put legal mumbo jumbo and logos at the bottom to make a great original idea look like a crowded mess on a small card. That stuff there is nearly impossible to read with the card in hand. I’ll also point out that there are other tobacco brands in the set and some of those brands have color variations that are tougher to find. I just happened to choose a scan off of Ebay that had a Polar Bear back.

I mentioned that the T206 sized card is tougher to find, but it’s more popular too, so it’s actually easier to find on Ebay. The T206 sized cards came one per pack, so they weren’t a rare insert, but it made them tougher to find than the base cards in the set. That ratio doesn’t play out on Ebay, where the 16 current 2002 206 Reese cards are split up between six base cards and ten T206 sized cards. The cheapest mini card is $3.49 delivered and it has a Tolstoi brand back. The cheapest Polar Bear is $4.55 delivered.