With apologies to Dave Parker and Bill Virdon, two former Pittsburgh Pirates greats born on this date, I already had a Card of the Day subject planned for today before realizing it was also their birthday. Yesterday I tried to find scans of a 1983 Fleer Don Robinson card for his first Card of the Day appearance. There’s nothing special about that particular card, it’s just a card set that I haven’t featured here yet. I couldn’t find good scans for the front and back, so I decided to do the 1983 Fleer set today and who better to pick that the man who they called “Pops”. 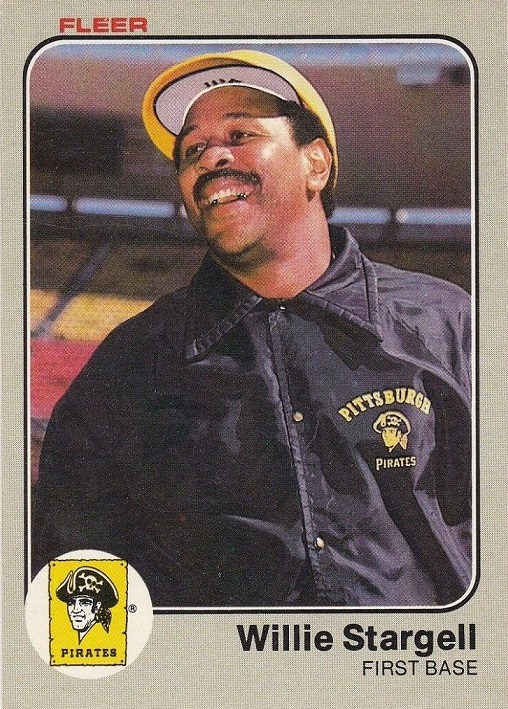 One of the funny things here is how cool that jacket is, yet how bad it is at the same time. If the Pirates produced that exact same jacket now for the first time, they wouldn’t sell one of them. It looks like a stadium giveaway. Yet when you put in on Willie Stargell in 1982 it becomes so much better. This is a great late career photo of Stargell, who is wearing one of the old gold batting helmets that I wish you could see better in the photo.

The Fleer set had a somewhat simple design here, but it includes one of my favorite things. It’s a gray border, rounded photo with a black and white border around it and the name/position at the bottom went as no frills as possible. Then they go and save it all by putting that great Pirates logo in the bottom left corner. Without that logo, this would be one of the most boring card fronts ever produced…at least in the last 70 years that is. 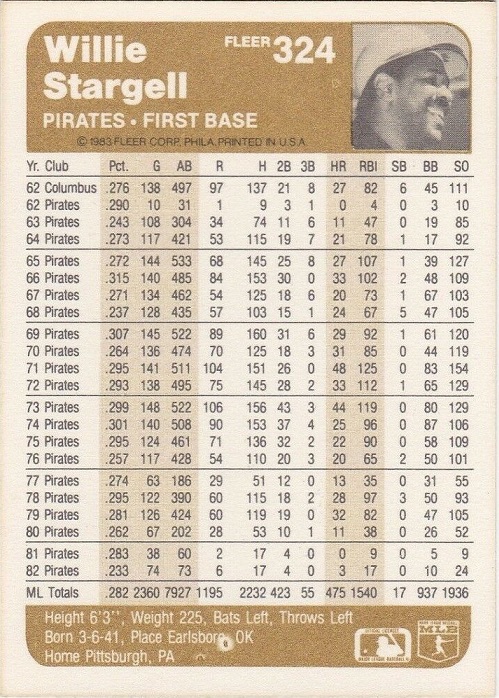 The back has something very interesting with the stats. Most sets will either have no minor league stats or all of them. For Stargell here, they included one year of minor league stats. He played a total of four seasons in the minors. Stargell had already announced his retirement going into the 1982 season so it was like a farewell tour all year for him. Fleer and Donruss each gave him two cards in their 1983 set, while Topps didn’t even include him in the set. Since he was retired and got a card anyway, what you see above are his final career stats in 12 different categories. The 1983 Fleer set was their third year of production and the first time that they included a second photo on the back. They continued that in 1984 and 1985, but dropped it for the 1986 set.

The 1983 Fleer set isn’t pricey and it’s not rare either, so that makes this a very affordable card. In fact, due to shipping costs, it’s barely more money for Stargell than it is for any common card. There are currently 88 auctions for this card, so that helps keep the cost down. Over the last three months, 26 auctions for this card have sold. So right now, the supply far outpaces the demand. There are a few options for this card with prices right around the $2 mark, which includes delivery. There are four autographed copies, all around $50 each. There are a few graded PSA 10 as well, with one going for just $39. That’s obviously a big difference from a $2 ungraded one, but the graded card will be the one in demand.