Today’s Card of the Day comes from one of my favorite sets from the last 50+ years and features a player who surprisingly hasn’t be in this long running series yet. Today is Don Robinson’s 64th birthday. He pitched for the Pittsburgh Pirates from his outstanding rookie season in 1978, through the middle of the 1987 season. Since this is his first time here, I had numerous cards to choose from today. This one was my first choice because I haven’t featured the 1981 Topps set here recently. However, I noticed that I was missing another set from his time-frame with the Pirates. The problem was that I couldn’t find a single decent front/back scan, so I went back to my original choice. You really didn’t need to know that, but when you read tomorrow’s Card of the Day article, you will say “Oh, that’s why he rambled on about choosing a scan and wasted my time, just get on with the article!”. I hear you, so let’s look at card #168 from the 1981 Topps set featuring Don Robinson. 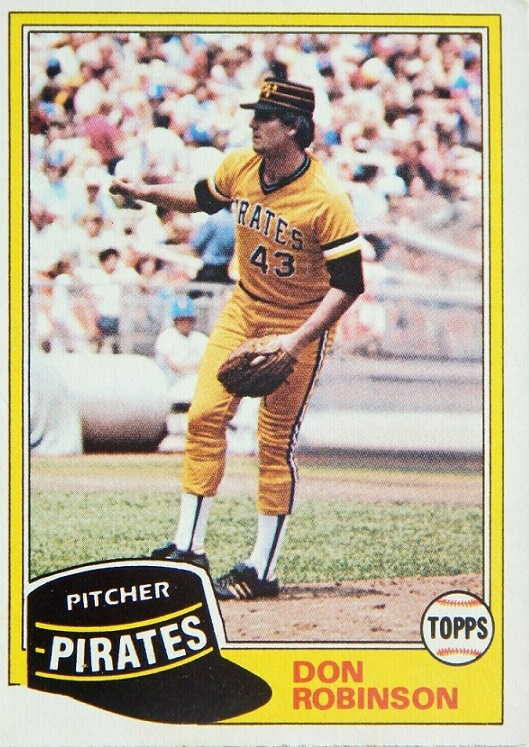 There are three reasons why I like this set, especially for the Pirates. I like how Topps matched the borders to the team colors. Not exactly obviously, but the Pirates had Pirates looking colors. I love the uniforms from this era, some not as much as others, but this isn’t the worst one in my opinion (there seems to be a strong like or dislike for the all gold and not much middle ground). The uniform is capped off by the pillbox hat and you can see some Stargell stars there. Finally, that hat in the bottom corner. There were 26 teams in the majors in 1981. There were 25 teams in the set that had a standard looking hat in the bottom left corner with the team name and position listed. Then the 26th team, a team from Pittsburgh originally known as the Alleghenys, were the only team with a different looking hat. Someone at Topps was smart enough to use the pillbox hat design and the rest is history. Robinson has a nice action shot here, one of the better Pirates poses from the set. 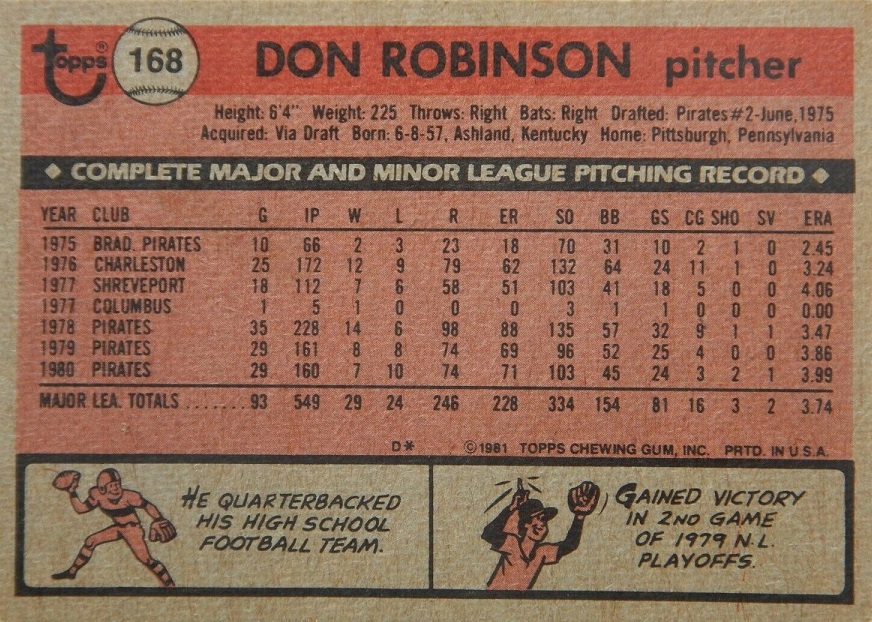 The back of this card had a lighter background and it made it easier to read the numbers/stats, which I appreciated years after they produced these cards, especially after trying to read some other sets from around the same time. Topps included all of Robinson’s stats here. Look at that rookie season in 1978. That’s some fine work. He was also a contributing member of the 1979 World Series champs. In fact, the comic below using a light red generic man in place of Robinson notes that he picked up a victory during the playoffs. Robinson was also the quarterback for his high school football team, though he didn’t know that you’re not supposed to wear a baseball mitt during a football game. That might possibly be due to the fact that his helmet doesn’t have the guard in front, so he may have been a bit dazed after some games. One final note, and that is Robinson’s residence at the time. He was born in Kentucky, but he lived in Pittsburgh in 1981.

This card is a common on Ebay and you can currently find 90 auctions for it. There’s a Gem Mint PSA 10 that is going for $83 shipped. That’s as nice as you will find, but you’re definitely paying a lot for that condition. There are also 17 autographed copies that are going around $10-$15 each, with some a little cheaper. Then there are some O-Pee-Chee versions that are the Canada version of Topps, eh. If you just want your standard 1981 Topps Don Robinson, no writing, no fancy plastic case, no foreign language, there are many options in the $2 range, which includes shipping.