There haven’t been too many players who hit 300 homers and played for the Pittsburgh Pirates during the 140 years of the franchise. Home runs weren’t a huge part of baseball in the early years and throughout the deadball era until some guy named Babe Ruth came along. The Pirates played in spacious Forbes Field during that time, which was built specifically to eliminate cheap homers. Only two players, Willie Stargell and Ralph Kiner, hit 300+ homers with the Pirates. Others including Barry Bonds, Hank Greenberg, Reggie Sanders, Jeromy Burnitz, Aramis Ramirez and Jose Bautista did most of their damage elsewhere. Dave Parker hit about half of his homers with the Pirates and Moises Alou hit none while in Pittsburgh. Then there is the Derrek Lee, Lance Parrish and Chuck Klein group, who played partial seasons with the Pirates and did approximately 99.9% (not the real number) damage with other teams during their long careers.

Klein’s stay with the Pirates, which began on this date in 1939, lasted just under four months during the 1939 season, though he went to Spring Training with the club in 1940 and got cut. He hit 11 of his 300 career homers with the Pirates, which left him eight shy of the 300 mark as a player. That was elite company at the time that he reached the magic number in August of 1941. The group included Babe Ruth, Jimmie Foxx, Lou Gehrig, Mel Ott, Al Simmons and Rogers Hornsby. That’s it. Six all-time greats. Klein put up solid numbers in Pittsburgh, including a .300 average and 47 RBIs in 85 games. He joined the club at just the right time to be included in the 1939 Play Ball set as a member of the Pirates, but there’s a catch, as you will see below. 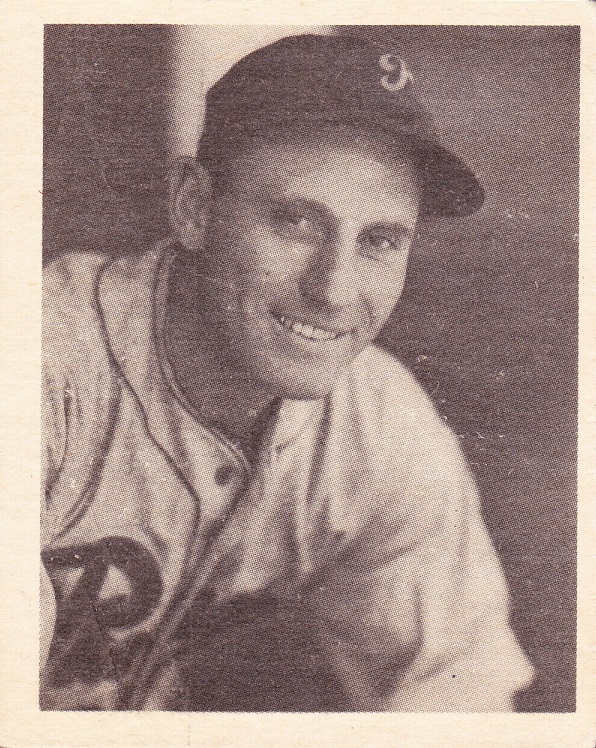 This card is really a Pirates card in name only, and the Pirates part is on the back of the card. This photo shows Klein in a Phillies uniform, one they used before the 1938 season. With the way he is sitting and the “P” on the cap, it can pass for the Pirates I guess, but the release date of the set didn’t allow for the company to get a picture of Klein with the Pirates on the card. 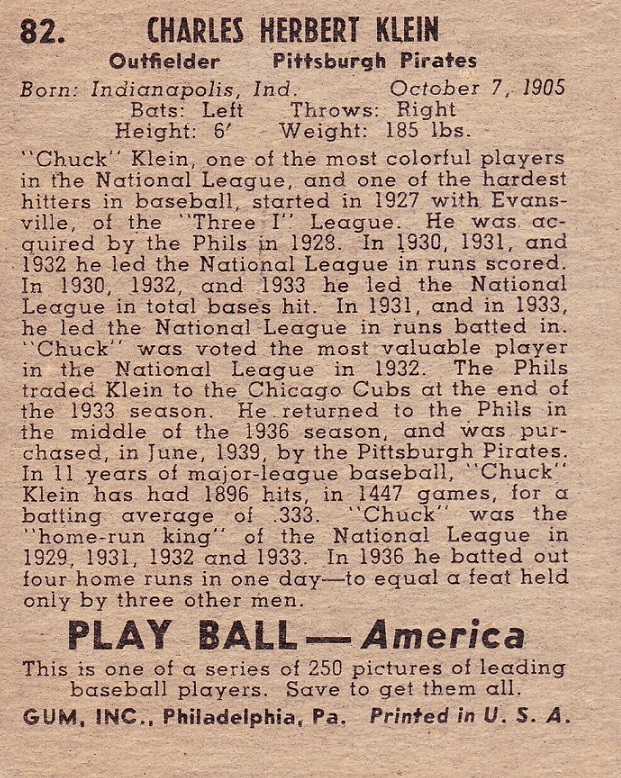 The back is what helps make this a Pittsburgh Pirates card, as you can see the team name right under his name.

The bio here gives a nice summary of his career, which was in its 12 season at the time. He was a monster on offense during the 1929-33 seasons and the bio here does him a bit of a disservice, so I can add a little more. He drove in 170 runs during the 1930 season. That number has been topped just six times in baseball history, and just once in National League history by Hack Wilson with his all-time record of 191. The other big fact missing here is extremely noteworthy. Klein won the Triple Crown in 1933. He did it despite having his lowest home run total during the 1929-33 span. He batted .368 with 28 homers and 120 RBIs. Add in the other facts listed above and you can see why he is in the Hall of Fame.

There are currently 27 examples of this card on Ebay, as well as three auctions for reprints. The reprints, which were made in 1988, have a white border on front and a white back (compared to the off-white above), along with the word reprint at the very bottom of the back of the card. Of the 27 auctions for the 1939 Play Ball card, the lowest priced one is $32 and it’s fairly low grade. Six others can be had in the $35-$50 range. The price goes up to nearly $400 for one that is graded SGC 88, which easily the highest graded one for sale right now on Ebay.