In 1984, Topps and Nestle combined to release a set that looked exactly like the 1984 Topps set, except one small difference on the front and back. It’s a 792-card set, just like the regular Topps set and includes all of the same cards. Card #264 in both sets was Doug Frobel, outfielder for the 1982-85 Pittsburgh Pirates. Today’s Card of the Day is a look at the Nestle version of his 1984 card. Both cards, along with his 1984 Donruss card, are considered to be his rookie card. 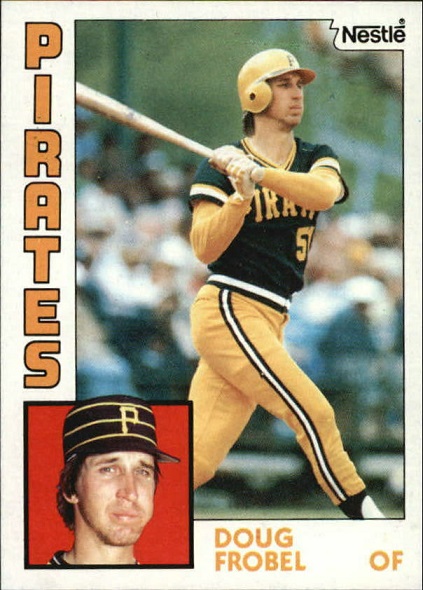 If someone handed you this card with a thumb over the top right-hand corner, you would think that it was a regular 1984 Topps card. Once they took that dirty thumb off of the card, you would notice that the “Topps” logo you all know and love has been replaced by a Nestle logo.

I’m not a huge fan of 1984 Topps, but I don’t hate it either. It’s somewhere in the middle. I love the Pirates uniforms from this era. I like that they used the team gold for the team name down the side and the player name/position at the bottom. Not really a fan of the portrait in a red box in the bottom left. The color is different (at least for the Pirates), but it has a Brady Bunch opening scene feel to it. I think Frobel realized that too because he doesn’t seem too happy about his picture. Thumbs up to the pillbox hat though, always a plus. 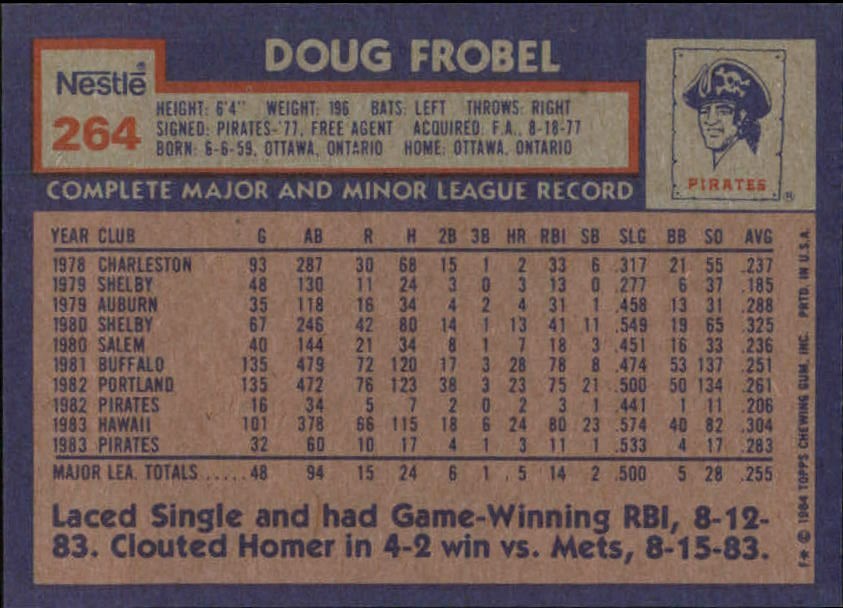 The back is just like the 1984 Topps as well, except for the word Nestle above the card number in the upper left. This is one of those backs that Topps didn’t put a lot of thought into for future generations. The big scan here makes it easier to read the numbers on the back. However, try reading stats for players who have been around for a while, when the print is small and the background is a darker color. It’s not as bad as the 1982 Topps set, but it’s pretty bad for your peepers.  As usual, I ask that you give them extra bonus points for including the Pirates logo on the card.

Frobel would have been a fairly decent rookie card to pick up. Considering that he was 24 years old in 1983 and he put up a .533 slugging percentage to go along with his .283 average during his brief big league trial, then it wouldn’t be unrealistic to have expectations for him going forward. Those numbers in Triple-A also had to be pretty encouraging, with 24 homers and 23 steals in 101 games. As you can see going back to the previous two seasons, the power numbers weren’t a fluke.

There aren’t many of these cards on Ebay, but it’s not a popular set either, mostly because it’s just like the regular Topps set. That being said, the rarity makes the set worth more than the regular Topps set, but that doesn’t translate to individual cards, especially common players. While you can find 64 of the regular Topps cards for Frobel on Ebay right now, just five examples of the Nestle card are currently listed. The cheapest one is $1.98, and two others can be had for just under $3 delivered. There are no sold auctions over the last three months, while four of his regular Topps cards have sold during that time.