Today’s Card of the Day comes from the 1990 Score set and features a player who was drafted by the Pittsburgh Pirates on this date in 1989. With the 18th overall pick that year, the Pirates selected 17-year-old high school shortstop Willie Greene out of Gray, Georgia. He never played for the Pirates, who used him as part of the return for acquiring pitcher Zane Smith for the 1990 playoff run. Greene made it to the majors in 1992 with the Cincinnati Reds and spent parts of nine seasons at the big league level, seeing time with four different teams. In 1990, Score featured first round draft picks in a subset of their regular issue set. Hall of Famer Frank Thomas is the key card from that series and they spelled his name correctly. The same can’t be said about card #682 featuring Willie Greene. 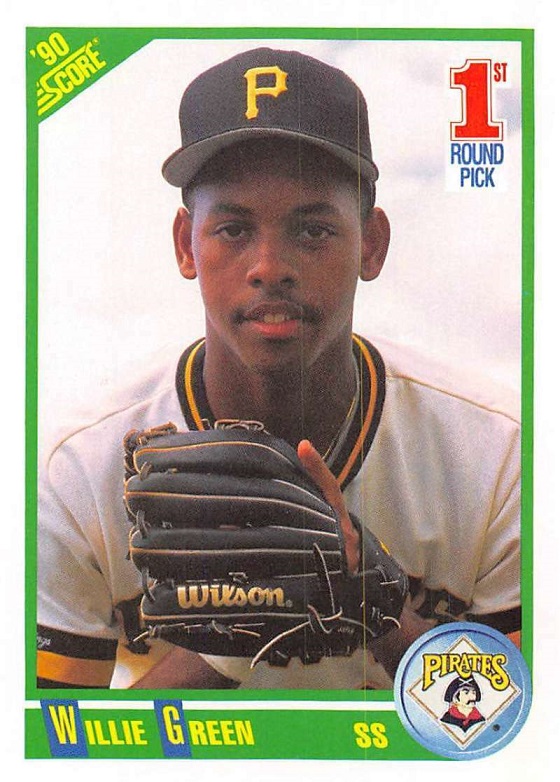 As you can see here, Score has a nice photo of the 17-year-old Greene in Pirates gear, which sort of looks like an advertisement for Wilson gloves. There’s a “1st round pick” logo in the upper right corner. The card has a white border, which is a bit difficult to see here. The border for the photo is green, which is just a coincidence with his name. All of the players in the first round draft pick series got green. Speaking of green, check out the spelling of his name. No “e” at the end. Must be nice to get your rookie card so you can show everyone and they spell your name wrong. Anyway, the points that Score lost due to the spelling were given back to them because they included the Pirates logo on front. Always a plus in my books. 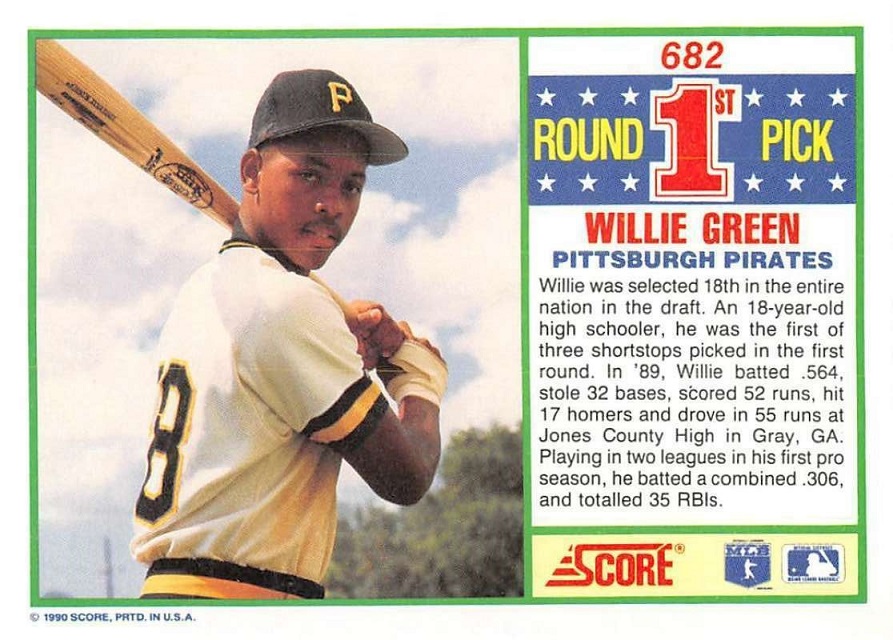 The back adds a second large photo of Greene, whose name is wrong on this side as well. There’s a nice little bio section with his crazy video game stats from high school. They also included a bit about his first shot at pro ball, which obviously went well. He actually did just as well after moving up a level, though the Appalachian League is better for offense than the Gulf Coast League. Greene hit .279 with five homers in 23 games in the GCL, then batted .324 with two homers and 24 RBIs in 39 games for the Princeton Pirates.

This card is a common that is easy to find on Ebay and you have multiple sellers who can get it to you for about $1 delivered. There’s also one person who has 750 of these available for $39.98 delivered, just over five cents each. If they actually sold for $1 each, then you could make great money off of that deal, but there has been just one Ebay sale for this card in the last three months. This card would have easily sold for $1 each back in 1990. Greene was rated as the #66 prospect going into the season. He was also rated as a top 100 prospect each of the next two years. His career didn’t pan out as hoped, but he still played 655 games over nine seasons in the majors and a large majority of big league players can’t claim either of those two numbers (or better) in their career.