Today’s Card of the Day comes from a set I collect…sort of. The Topps Living Set. This particular set has two new cards added every week. Topps puts them up for sale for seven full days and however many they sell during that time, that’s how many of those cards are printed. Some cards (not many) have reached five-figure production numbers, while others have fewer than 2,000 copies in existence. The popularity of particular cards can sometimes skyrocket if the sales were low, while some of the most popular players had high production numbers (as you would expect), so the prices stay reasonable on those cards. Ralph Kiner was one of the earlier cards in this set and he falls in the medium range for the print run. The Pirates traded Kiner to the Chicago Cubs on this date in 1953, ending a run of unbelievable home run production that still has him ranked as the second most prolific home run hitter in franchise history. As mentioned, I sort of collect this set. I’ve bought all of the Pittsburgh Pirates cards as they are released. I don’t have anyone else from the set though, but I still check every week just in case. 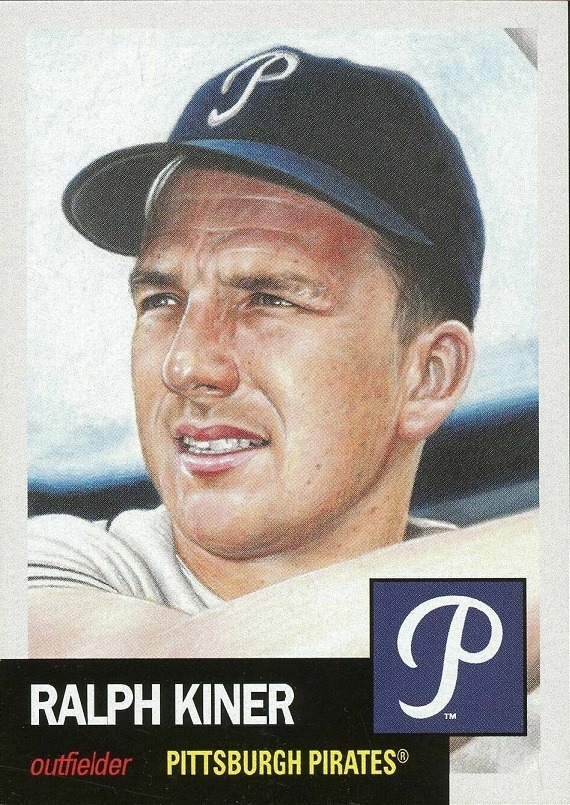 This is exactly what a 1953 Topps card would look like except for the logo used at the time. The Pirates had a different logo in 1953 and what you see next to his name at the bottom was the cap logo back in 1947. It was a one-year hat/uniform style and Kiner hit 51 homers the season for the Pirates, which was a record at the time. All of the Pirates in the original set and the Living Set have black boxes at the bottom for the names/position/team. All of the Pirates have their names in white, position in red and Pirates in yellow EXCEPT Adam Frazier. For some reason his position was also written in white. Not sure why, might have just been a production error that they didn’t catch. Kiner had a 1953 Topps card with the Pirates, but this is a completely new photo/artwork.

After this article already posted, I noticed that this Kiner image here is based off of an actual photo that I had saved on my computer for random Ralph Kiner mentions. Here’s the original: 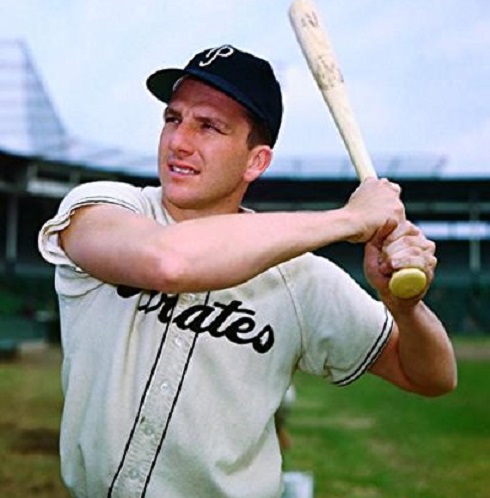 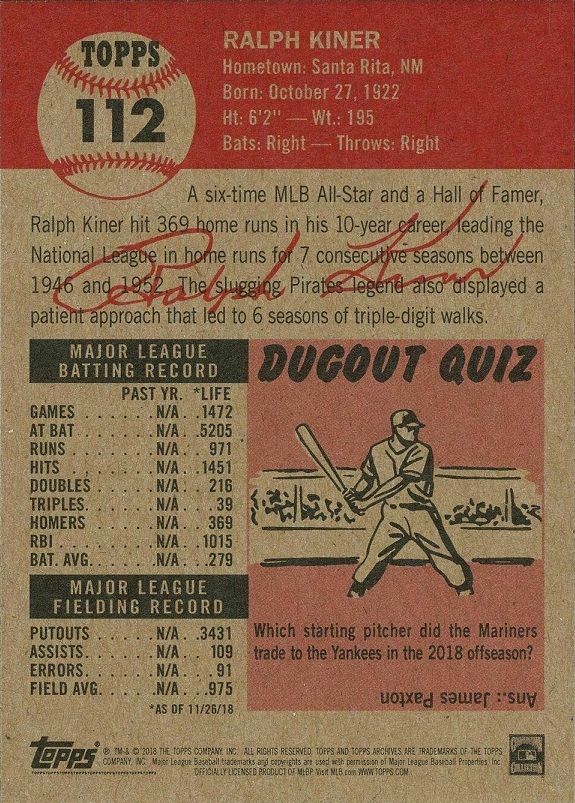 The back of this card is set up just like a regular 1953 Topps card. You have to love the disclaimer on the back of the card that the lifetime stats are up to date as of November 26, 2018. Kiner passed away 4 1/2 years earlier, so probably a safe bet that they didn’t need that asterisk there, but who knew way back in 2018 what modern medicine could be capable of in the future. Just like 1953 Topps cards, there are bios, a dugout quiz question/cartoon and each back has a facsimile autograph of the player. As you can see, Kiner is card #112 in the set. They are currently up to cards #419/#420 for sale. Just 13 of those players are from the Pirates, including Honus Wagner, Roberto Clemente and Willie Stargell.

As mentioned up top, these cards had a set print run that was announced. For Kiner, they produced 4,114 of them, so that’s how many exist. Some of those are in sets, as I’m sure there are some people who have kept up with the set over time. Ebay also has listings of various sizes for partial sets. There are still 28 individual auctions for this card currently for sale. The ungraded ones range from $5.77 to $17 each. Most are closer to the bottom of that price range and I’d recommend the low-end prices if you’re going to buy. There are also three graded versions, one PSA 9 and two PSA 10. The 9 is for sale for $20 and the 10’s are going for $40 and $50, with both having best offer options.