Today’s Card of the Day is a more recent card with a throwback design as part of the Topps Heritage series. The Pittsburgh Pirates traded All-Star outfielder Nate McLouth on this date in 2009 for three young players. Among that group was one player who had some big league experience. That was 25-year-old right-handed pitcher Charlie Morton, who pitched 74.2 innings for the 2008 Atlanta Braves. He went on to make 142 starts for the Pirates over seven seasons. In 2014, Topps Heritage put Morton on a card that used a design from 49 years earlier and card #254 in that set was Charlie Morton. 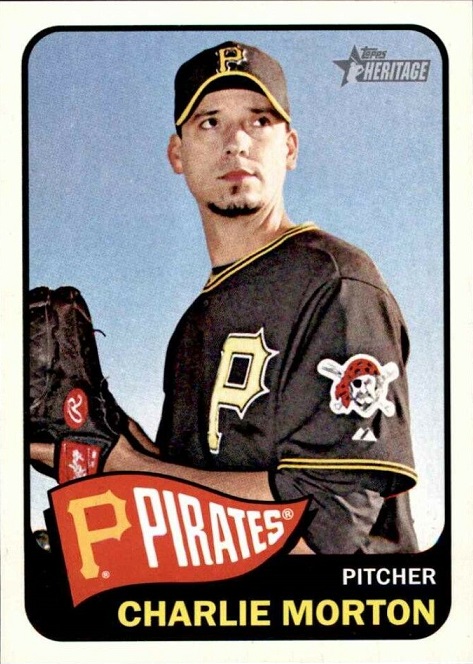 The 1965 Topps set had white borders, with a frame around the player’s photo that was rounded on both the  inside and outside borders. There was a large pennant for each team at the bottom left of the frame and then the player’s name and position were just below that pennant off to the right. There were no action shots in 1965 and Topps had many of the photos for the 2014 set in staged action poses, though there were a few exceptions. The staged action photos, with players always looking off in the distance, keeps up the throwback appearance.

There is a difference here from the original set, besides the use of the current logo, as opposed to the great logo from 1965. Topps used Pirates colors here for the borders and Morton’s name, with his position written in white. I’ve mentioned before that Topps over the years has occasionally matched up colors on front to the team colors. They did not do that in 1965. All of the Pirates cards had a dark pink border, name in white and position in black. I like this look a lot more, with the obvious exception of the logo/pennant. The 2014 logo pales in comparison to the 1965 logo. Personally, I would have went with the sleeve logo you see in the photo of Morton, but if I want to be such a tough critique maybe I should design my own cards. As an interesting side note, Topps didn’t use team colors for all of the teams, but some others besides the Pirates match up. 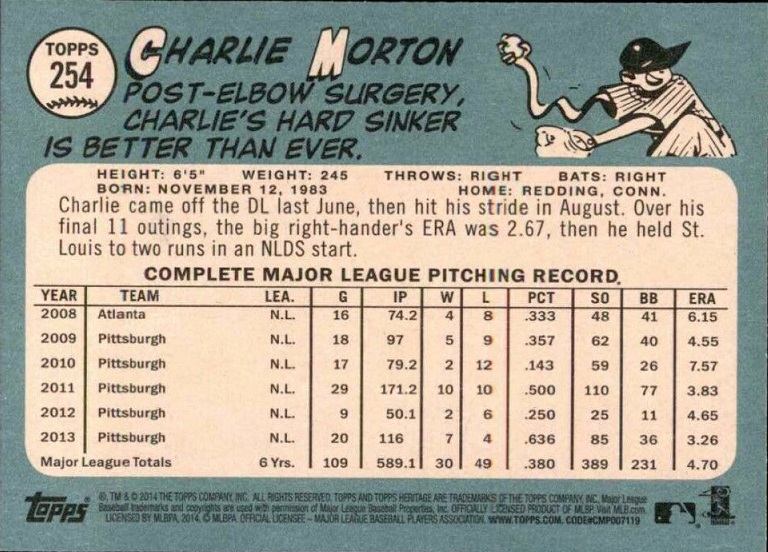 The back is set up just like the 1965 Topps, with the blue border around an area of white for the stats. When room was available, the cards had a cartoon and a bio, like you see above. Warren Spahn, as an example, was around since 1942 when the 1965 set came out, so he has straight stats. No bio, no comic. As you can see in Topps cartoon of Morton, his arm post-elbow surgery lost a lot of muscle and got longer, but he was still able to improve his hard sinker, and he was pretty happy about that. The bio notes that his second half run helped the Pirates to their first playoff appearance in 21 years and he pitched well in the playoffs.

This is a common card that you can get for around $2 delivered, though I’ll note that there aren’t a lot of options on Ebay (eight active auctions as I write this up), so if you want one, go get the lowest priced one now. After the two or three lowest priced ones, the rest all have high shipping costs. I’ll add a second note and that is one listing that stands out. There’s an autographed version for $11.50 delivered. Morton has what I call a “modern” autograph, where quickness is more important than looks. It’s not the worst one that I’ve seen, not even close, but I couldn’t tell it was him if I saw it on a baseball.