Today’s Card of the Day is a two-for-one special, with a new player and a new set. The 1988 Topps Big set had the look of the 1956 Topps set, both on the front and on the back. It wasn’t exactly the same, but they took many of the same major ideas. Both sets had a horizontal layout, with a big portrait of the player and a smaller action shot in a scene that acted as a background. The backs each had comics along with minimal stats. Both are bigger than the standard card size we are used to today, and they were both released in series. The 1988 Big set had 264 cards, released in three series of 88 cards. Today’s Pittsburgh Pirates card of the day features 1987-88 outfielder Darnell Coles, who was part of series three in the set. 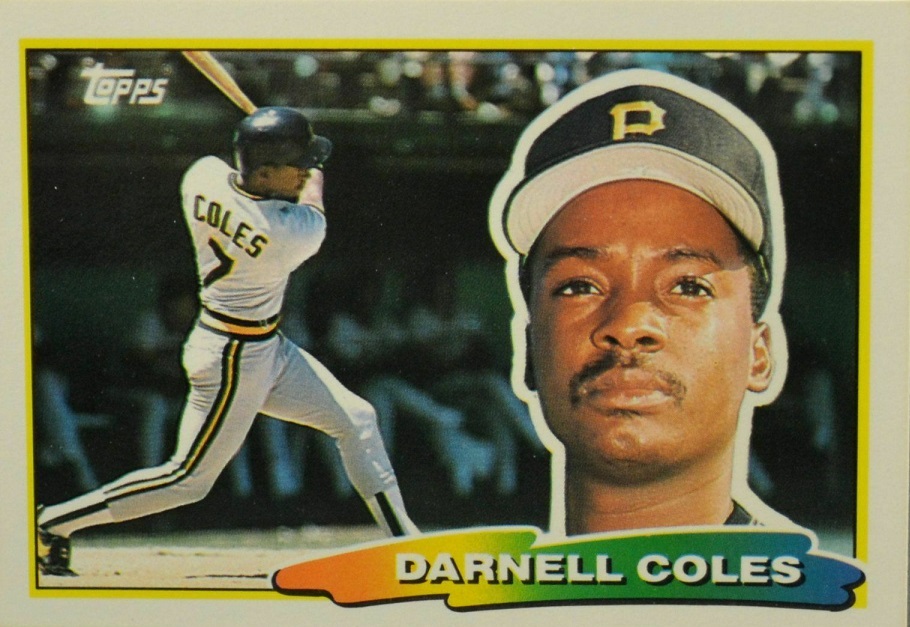 As you can see, the background photo is an action shot of Coles at the plate, while the portrait shot is more prominent over the scene. The difference here with the 1956 set is that this set used an actual photo, while the older set used an artist rendition of a photo. This set is also a bit more colorful, with the section for the name looking much more different than the 1956 set. The older set also included the team name, position and a facsimile autograph on front. So you have the look, but maybe you could say a more modernized version. In more recent years, Topps just started doing exact replicas of the front designs (instead of tribute designs), and with higher quality photos they have made some great looking sets (Heritage/Archives/Fan Favorites) recently. 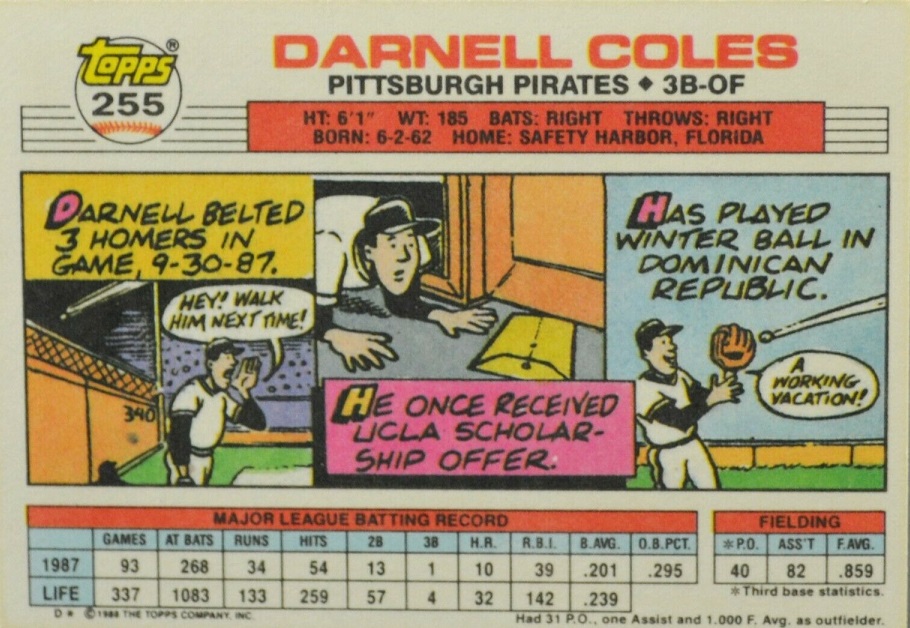 The generic Topps player who has looked like no one ever in baseball history, returned in 1988 for the Big set. Every player got the generic man, who can be found on the backs of cards in many of the earlier sets as well, which obviously includes the 1956 set. As with the front, this set is a more colorful version of the original, while keeping almost all of the same qualities. The facts here note that Coles hit three homers in a game, along with a right fielder standing at the wall…what is the white box on the ground? It’s almost like someone reversed the colors for the warning path. In the middle we see Coles sneaking up on an envelope that was slid under his door. In photo three he is happy to be in the Dominican playing baseball. Hey, how come no one noticed that generic Coles looks exactly like the right fielder who obviously isn’t him?

The statistical categories are the same ones as used in 1956, including fielding stats, which were not part of card categories in the 1980’s, giving this card something a bit different for the era.

There are currently 16 auctions for this card on Ebay, including a surprising one. Many of the sets from this era are hard to find in graded condition except for the elite players, and usually that’s just the rookie cards. Finding a graded common player from a 1988 set is rare, but then when it’s not even one of the regular sets from that year, and it’s a novelty type set like the big cards, you never see graded versions. They’re out there, but extremely rare. No one is grading it for resale. However, there is a graded 1988 Topps Big Coles card and they want $50 for one in BGS 9.5 condition. BGS (Beckett Grading Service) isn’t the biggest name in grading, but it is a respected company. If you collected cards regularly for more than a few years, you’ve heard of Beckett. I’d stick with one of the other 15 auctions and pay about $2 delivered, but the graded option is available and 9.5 means that it’s in fantastic shape.