Card of the Day: 1960 Leaf Hal Smith and Hal Smith

Today’s Pittsburgh Pirates History article had a new bio for 1965 Pirates catcher Hal Smith. In that article I mentioned that there have been three Hal Smiths in the majors over the years and all three played for the Pirates. In the 1960 Leaf set, they decided to feature Hal Smith the 1960-61 catcher, with Hal Smith the 1965 catcher, who was with the St Louis Cardinals at the time. That is obviously a perfect card to feature today, so here we are with that article. This is our first 1960 Leaf card as well. It was a one-year set for the company, with 144 cards included, but many big names were missing from the set, so it isn’t a really popular set from that era. Leaf previously put out a set in 1948-49 that was featured here twice with cards for Honus Wagner  the coach and Danny Murtaugh the player. Today’s card is Hal Smith the catcher and Hal Smith the catcher. 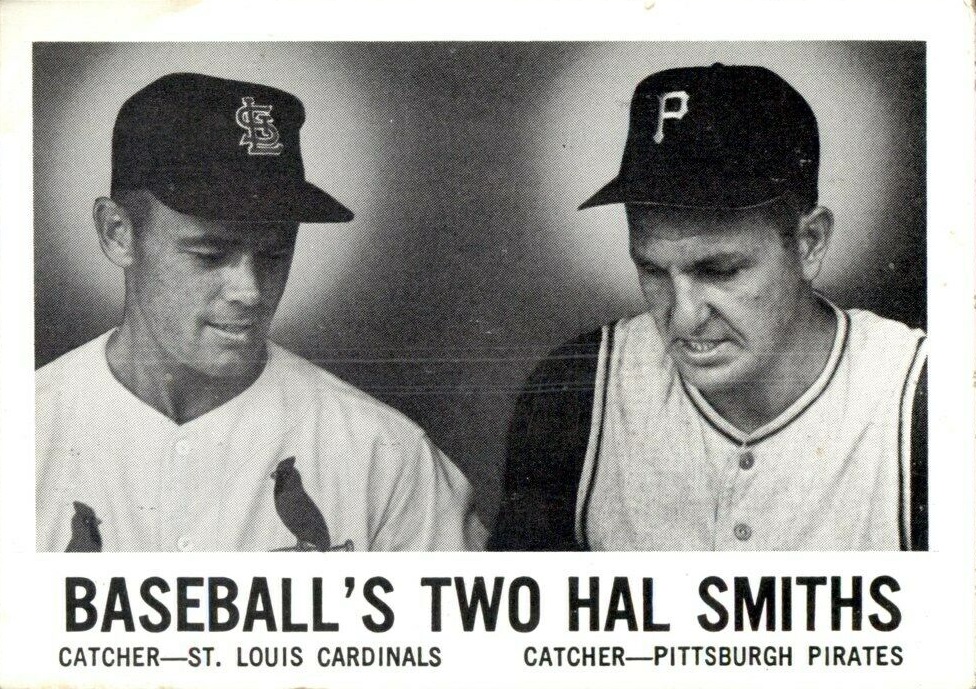 The 1948-49 Leaf set was a colorful offering, while their 1960 set was as plain as possible. They used black & white photos, white borders and black writing. Nothing fancy at all, and no markings that tell you this card was produced by Leaf. In fact, the back doesn’t have any Leaf markings either. The fact that the set is so boring and plain looking makes this the best card in the set (my opinion). There are no staged action photos, all of the pictures are of the portrait variety. 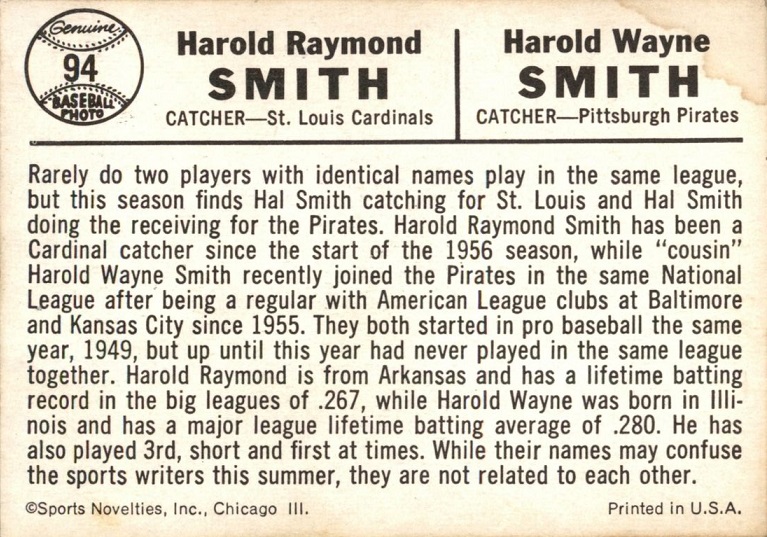 The back has a nice combined bio for the two players, separating the pair by adding their middle names. The Hal Smith on the Pirates on this card was acquired by Pittsburgh on December 9, 1959 and the back notes that this is the first time that the two played in the same league. This set was released in 1960 and obviously this photo was also taken in 1960, so that means that it wasn’t out for too long before Hal Smith became a household name. For those who don’t know, he hit a three-run homer in the bottom of the eighth in game seven of the World Series, which at the time gave the Pirates a 9-7 lead. It also helped set up one of the greatest (some of you are saying “the greatest”) moments in baseball history when Bill Mazeroski ended the series on his famous home run.

The back is just as plain as the front of the card. Not much thought went into the design of this set, however, I do like the baseball used for the number of the card, especially how it lets you know that this is a “genuine baseball photo”.

This card is not an easy one to find for sale, though the act of searching Ebay for one is obviously easy to do. There are 27 active auctions for “1960 Leaf Hal Smith” at the time of this writing. Both players also have individual cards in the set, so those take up a large majority of the listings. In fact, just two auctions are active right now for this card and the scan above is from one, which is for sale for $49.50 plus shipping. The other one is an amazing offering because it’s signed by both Hal Smiths. That one is pricey though, $150, with a best offer option. Neither Hal Smith is a difficult to find autograph, but getting the two on the same card is impressive. There are only two sold auctions for the regular version of this card over the last three months. One went for $28, then other for $75 in nicer shape.