Rennie Stennett recently passed away at the age of 72, so he’s getting a special tribute appearance in our Card of the Day series today. He’s already been here once for his 1976 Topps card that celebrated his 7-for-7 game in 1975. That still left plenty of options for a second feature. I decided to go with the 1974 Topps card because that was also had a special tribute on it, as you will see in the picture below. 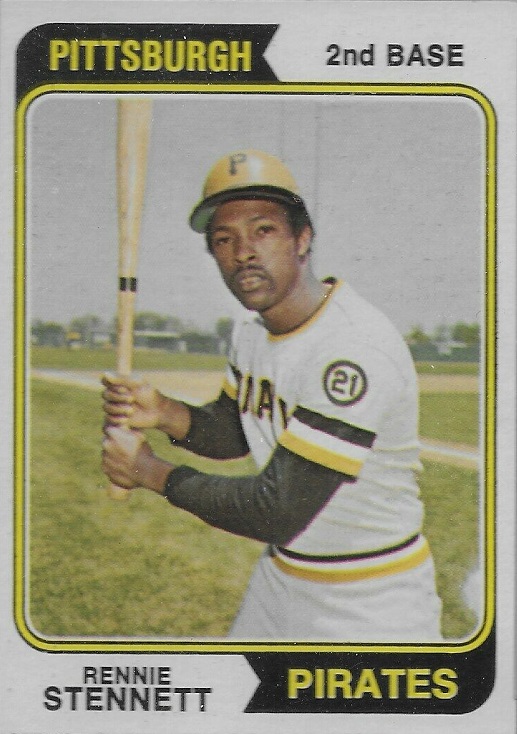 Two things caught my eye while scrolling through options for this article, and the one was the clear deciding factor. The first thing is that I personally love that the 1974 set used that team colors for the border and team name, along with the black box and black writing for his name, it’s perfect for the Pirates. Topps did that occasionally over the years, matching the team color to the card colors, and it always looks good. The second more obvious reason is the “21” patch on the sleeve here, which was in full view for the camera front and center. The Pirates wore that in 1973 for Roberto Clemente, so you know that this photo was also taken in 1973. Not all cards had new photos for the players. Sometimes Topps wouldn’t get anything new for a player during the season and they used an older photo. That’s not the case here and it makes this card special, especially for this particular tribute article for Stennett. 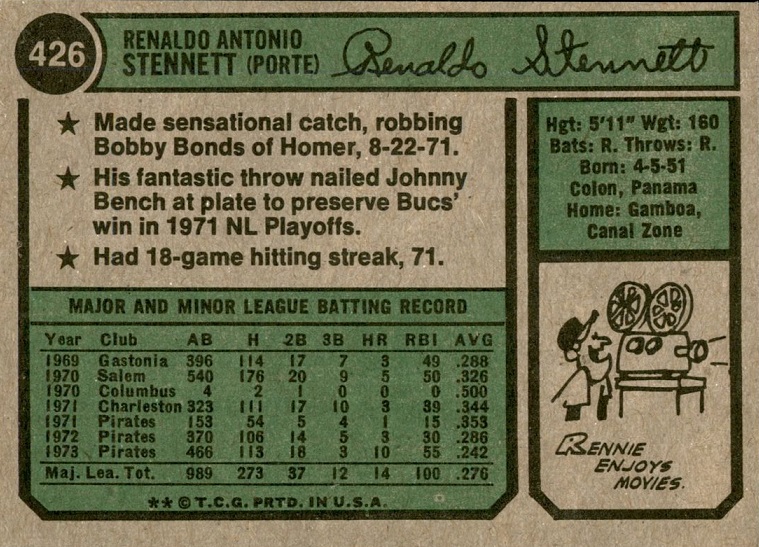 The back has his full career stats, though the statistical categories were limited back then to just seven categories. The back also has some tidbits about his career up to that point, which was still early in his MLB time. I’ll note that Stennett is listed as being born in 1951 here, but the announcement of his passing by his family said that he was 72 years old, so it appears that he was two years old that it has been thought this whole time.

I wanted to note the two items here that stood out in the bio. Stennett hit .353 in 1971, but you can see the at-bats total there, he didn’t play much, so it’s impressive that he had an 18-game hit streak. It wasn’t a cheap streak either. In the middle he had back-to-back four-hit games. He also had nine straight games with 2+ hits. That’s a great note. However, the first note about robbing Bobby Bonds of a homer on August 22, 1971 has to stick out to everyone, since Stennett was a second baseman most of his career. On that date listed, he was playing second base against the Cincinnati Reds. Bonds was on the San Francisco Giants at the time. It didn’t happen…at least not on that day. On August 22, 1972, Stennett pinch-ran in the ninth inning then went to left field, where with two outs and the Pirates winning 1-0, Bobby Bonds hit a fly ball to Stennett for the final out. That forced me to go to the old newspapers to find out that sure enough, Stennett went back to the fence on a towering fly ball and leaped up to catch it, while saying afterwards that he believes that it would have went over the fence if he didn’t catch it. The fun fact is true, they just got the date wrong.

This card is fairly easy to find on Ebay and you have your choice of condition for the most part. The most expensive one is $23 (with a best offer option) for a PSA 8. The next most expensive was $13.99 for an autographed one, which has probably sold by now because there’s a rush of memorabilia after a player passes. After that, the other 85 auctions were all under $10, all the way down to one that was selling for 99 cents, though it has seen some handling in its day.