Today’s Pittsburgh Pirates Card of the Day comes from the 1996 Donruss set, a set and a player we haven’t covered here yet. This particular set is an oddity because it’s a rare set where the back of the card is much nicer than the front. That’s my opinion of course, but I can’t be the only one who thinks that way. Jacob Brumfield, outfielder for the 1995-96 Pirates, is celebrating his 56th birthday today. That makes today a good day to look at one of his cards. He had a decent collection of cards to choose from because card companies were plentiful during that time. I went with this particular one because it was different, though different isn’t always a good thing when it comes to card designs. 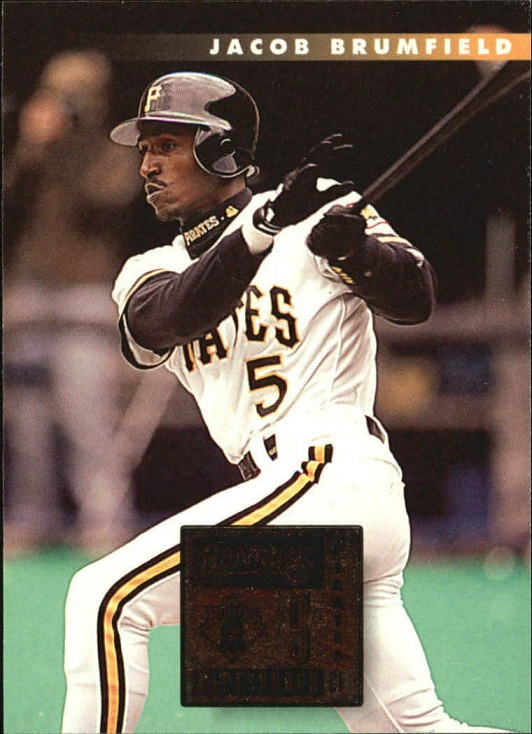 This card starts off well. It became popular during this era of cards to get rid of the borders for photos and just go with a full front photo, putting things like the name, team and position in the photos, instead of the border. Donruss got a nice action shot of Brumfield, and I like how they put him name on the top in a multi-color bar. This card looks good until you get to the bottom middle. Donruss decided to put a strange, very hard to read, logo box in the same place on all of the cards. If you think I just chose a bad scan, you would be wrong. That box has a lot going on inside it and I’ll save you the trouble of trying to read it by describing it.

The Donruss logo is up top. The Pirates logo from that time is just below it, with his jersey number (#5) next to it. The word Pittsburgh is in that black box at the bottom that looks more like a bar code. His position is next to that in the bottom right corner and the word Pirates goes from top to bottom on the right side. It was an awful design and placement on the card even if it was easy to read. It’s possible that they saw how bad it was and it was too late to make any major changes, so they just decided to have the printer make it difficult to read instead. It really interferes with some of the photos in the set too, which makes it even worse. 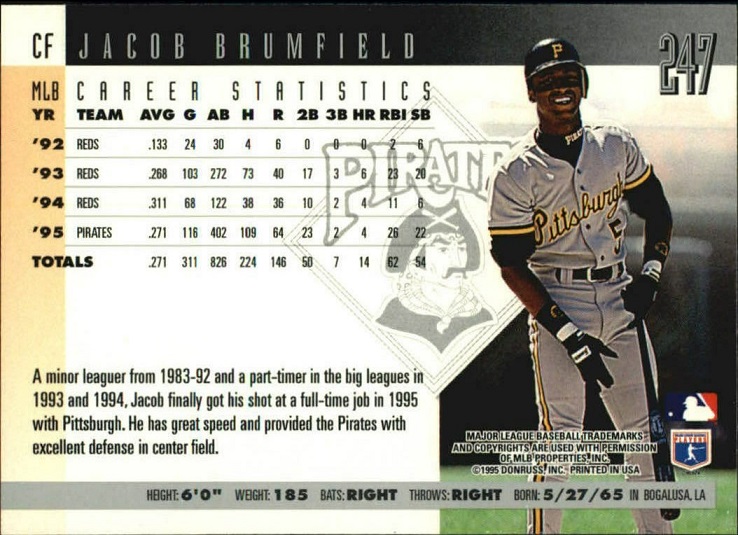 The back gets much more love from me than the front. The weird logo is just too much for me to overlook.  They actually put more thought into the back design than the front, or at least you would hope so from the looks of the two sides. The back has the old school (not then it wasn’t) logo faded into the background. That always gets extra points, especially when you can see it (I’m looking at you, weird front logo). They also add a second photo of Brumfield and I like that it was obviously not taken the same day as the photo on front since home and road jerseys are shown.

The back has a mini bio, which tells just enough about Brumfield that you get a good story about his pro career, but I’ll expand a bit. He signed out of high school shortly after he turned 18 years old, and he didn’t make the majors until weeks before his 27th birthday. He saw decent time in 1993, getting into 103 games, and the 1994 season was shortened by the strike, so that kept his games total down. The 1995 season was also slightly shorter, so he was basically a full-time player by getting into 116 games. He set a career high with 119 games in 1996, thought most of the season was spent with the Toronto Blue Jays. Brumfield played in the majors until 1999 and in the minors until 2001, 18 years after he signed his first pro deal.

This card is obviously a common card, but there aren’t a lot of options on the website called Ebay. However, one seller has 103 of these cards for sale individually….seriously. There are a total of 11 auctions going right now and the cheapest one is $1.50 delivered. One person has one with $4.99 just for the shipping, so be careful if you purchase one that has a $1.10 price tag.