One of my favorite parts about this series now, besides the fact that I’m writing about baseball cards, is when I get to include a player here for the first time. It also helps when that players has more than 1-3 options to choose from during their time with the Pittsburgh Pirates. William Pennyfeather didn’t spend significant time in the majors, playing 40 games over the 1992-94 seasons. However, he came up at the right time for baseball cards. The late 80’s and early 90’s were the boom for the baseball card industry and collectors either had a lot to choose from or a lot to buy if they didn’t want to make a choice. I scroll through Ebay looking for ideas and one seller made it easy for me here, posting a lot that had ten different cards of Pennyfeather, who is celebrating his 53rd birthday today. So I picked my favorite and that just happened to be the 1993 Score card shown below. 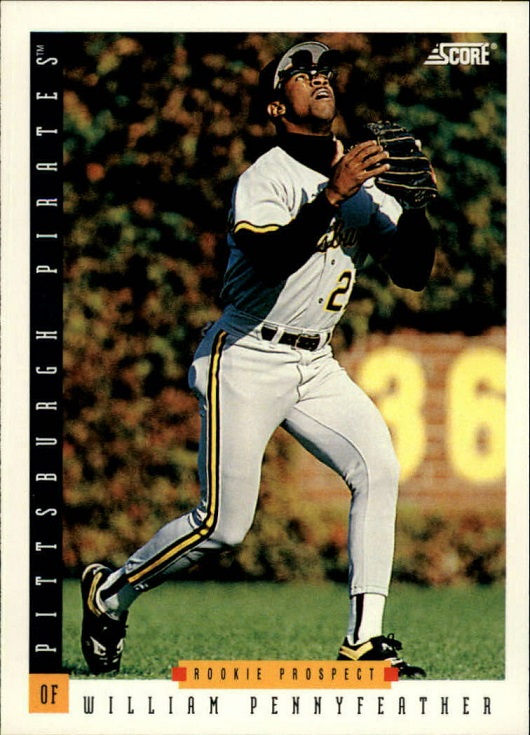 The 1993 Score set had a decent design. I’ve never been a fan of the sideways writing, but a few sets that did it didn’t make it as easy to read as it is here. I like how they went from the team name, to the position at the intersection of Pirates Road and Pennyfeather Lane in the bottom left corner, while using team colors. Note the “Rookie Prospect” tag just above his name. This is a great photo, obviously taken at Wrigley Field, which allows us to narrow down this photo to September 28, 1992. I love the 1992 uniforms and note the back pocket of Pennyfeather. Seems to be a tobacco can, but maybe a bleacher bum through a hockey puck or a Hostess ding dong at him and he picked it up. Anyone, it’s a nice action shot from a 10-3 Pirates win that pushed their record to 94-63. The clinched the NL East crown just prior to that game. 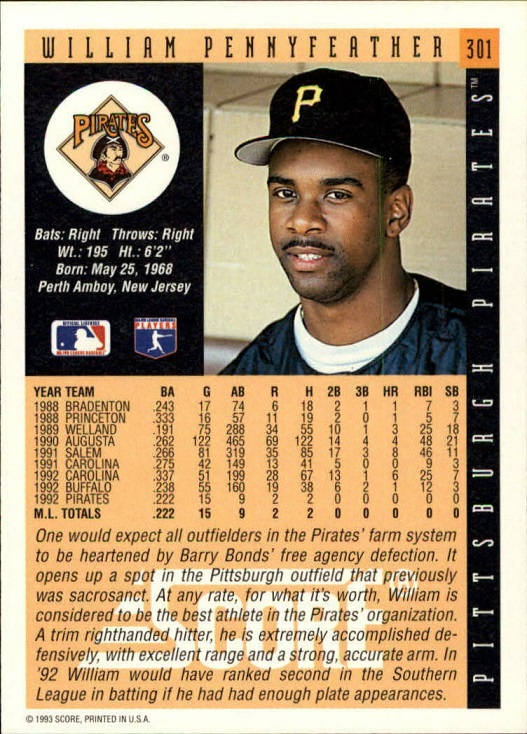 I tried for a better scan of the back, but this one has that annoying printer line right on his photo, so apologies to Mr Pennyfeather. What stands out more than the printer line here is the vocabulary lesson in the bio. Context gives away the meaning, but I’ll point out that a search of Pirates Prospects did not turn up the word sacrosanct once since 2009. Now it will because it’s in this article, but I’m going to try to use it again soon if I remember.

Pennyfeather was a member of the 1992 Pirates team that won a third straight NL East pennant. He had three stints with the club, coming up for a brief time in June, another brief stint in early August, then he returned in mid-September to finish out the season. He played 15 games, but he received just nine at-bats. With an outfield spot that was previously considered sacrosanct now opened up by the departure of Barry Bonds after the 1992 season, that should have been a good sign for Pennyfeather. I’ll point out in his minor league stats shown above that Carolina was a Double-A team at the time and Buffalo was the Triple-A affiliate of the Pirates. He obviously did not have success at Triple-A ahead of his big league time. He really didn’t do much better in 1993, but he got into 21 games for the 1993 Pirates and they gave him more opportunities at the plate as well, going from one start that first year all the way up to five starts in 1993. However, his time with the Pirates at the big league level was over the following April after just four games off of the bench. Pennyfeather had a love for baseball though and despite playing his final big league game on April 17, 1994, he played minor league ball (mostly independent ball) through the end of the 2006 season.

PS The Pirates logo on the back gets the 1993 Score set some extra brownie points.

There aren’t a lot of these being sold individually on Ebay. You could just go and find that lot I mentioned at the start and get a bunch of Pennyfeathers in one shot. If you want this specific card, you don’t have many options, but there are enough under $2 delivered that if a fellow reader from this site went and bought one right away, you could still get it for cheap. As usual, watch the shipping charges, that’s where some people get you.

25 May 2021
Card of the Day
Featured, William Pennyfeather