Today’s Card of the Day comes from one of my favorite modern sets. The set known as The Sporting News Conlon Collection features numerous players who otherwise didn’t have cards available for this series, including pitcher Lee Meadows. Sure, I could have just used a different card of Meadows from earlier in his career with a different team, or I could have waited for one of his rare Pittsburgh Pirates cards to show up so I had a good scan. Meadows was in our history article for today for the 1923 trade that brought him to the Pirates. He’s the third player we have featured from the Conlon Collection set, joining pitchers Carmen Hill and Emil Yde, who were teammates of Meadows in 1927 (and 1926), when they helped the Pirates win their sixth National League title. 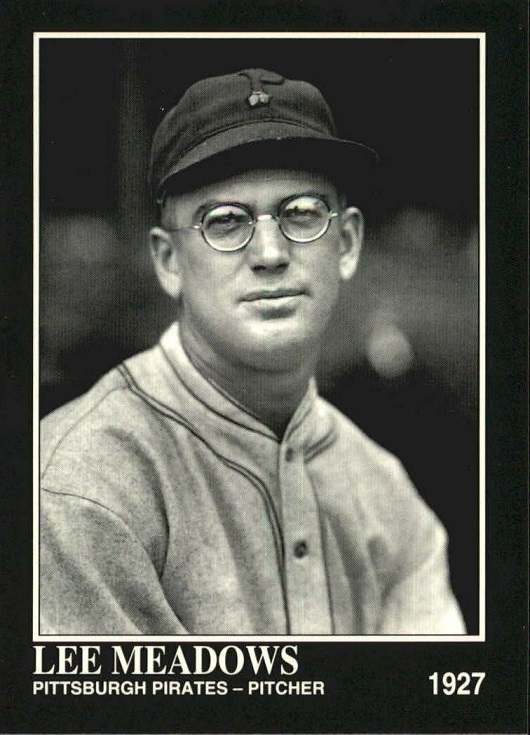 As I mentioned, I’m a big fan of this set and it’s not because of the great design or anything fancy. This set kept everything black and white, front and back. The great part is the pictures, which were part of the Charles Conlon collection. He took thousands and thousands of photos starting in 1904, which are still around today and he managed to capture all-time greats, average players and some guys who were only in the majors for a few days. The Sporting News had a collection of over 8,000 photos and they were used to put together a set of 1,430 cards produced over five years. The Meadows card is from 1993, the third series produced and the number in the bottom right-hand corner lets you know that this photo was taken in 1927. 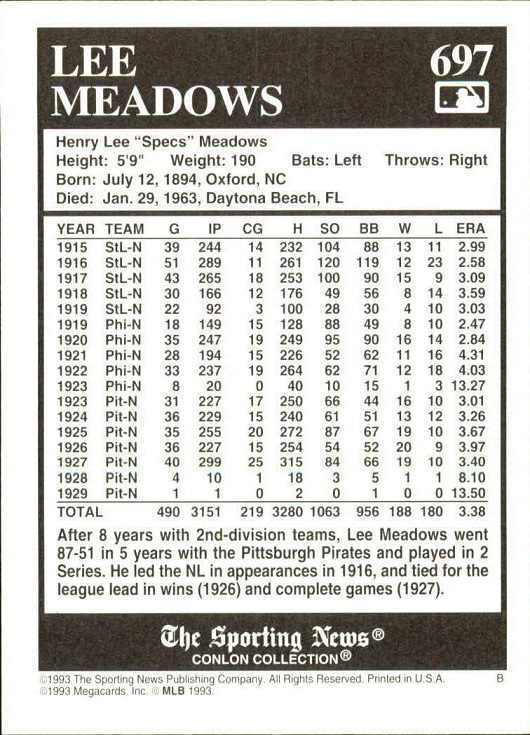 The back of these cards use a simple black and white design, nothing fancy, but it works because you get the entire career stats for the player in nine categories. You also get a little bit of bio information on the players at the top and the bottom. Any guess why they called him “Specs”? In case you didn’t know baseball history, it was extremely rare to see players wearing glasses back then and they all got the nickname Specs, including the aforementioned Carmen Hill.

What I like most about Meadows with the Pirates is that he was basically the same stud pitcher during their two World Series appearances, going 19-10 each year. The 1927 season was a little better with more innings and a better ERA, but look at that year in between the two pennant winners. He won 20 games for the only time in his career in 1926. If you just looked at ERA here, then you would think that he was a better pitcher before coming to Pittsburgh, but that is misleading. The early years there were during the deadball era, but baseball made rules to help the hitters, getting rid of pitches such as the spitball, which helped the pitchers. There were pitchers grandfathered into the rule who got to keep throwing the pitch, but it was a limited number of the players compared to those who actually used the pitch before the new rule went into place. They also started throwing in new baseballs much more often after Ray Chapman died of a beaning and newer baseballs were easier to see and traveled better. So when you see the ERA’s go up during his time with the Pirates, that didn’t mean that he wasn’t as good. In 1927 his 3.40 ERA was 51 points better than league average. In 1916, his 2.58 ERA was basically league average (2.61).

These cards aren’t everywhere on Ebay, but you can buy them individually. If you have the means to get the entire set then I highly recommend it because every card is interesting, with a quality photo of the player. If you just want the Meadows, then you can get it for about $2 delivered. Just watch the shipping costs because some sellers are asking more for the shipping alone than you should pay for the total price.