We have only had one card from the 1967 Topps set featured here before, which showed catcher Jesse Gonder, but we have also already posted an article about a Topps Rookie Stars card that featured Pittsburgh Pirates pitcher John Gelnar. You’ve probably already read the title here, I doubt many people skip that part, so you’re probably wondering how we are posting an article on a card that features John Gelnar as a Rookie Star and it’s not his rookie card…unless you already clicked that link.

Topps had a habit of using the same players more than once on one of their Rookie Stars cards if that player was still considered to be a rookie. In fact, they once featured a player named Bill Davis on four of these cards between 1965 and 1969 and he never became a star. Gelnar was on a 1965 Topps card with catcher Jerry May and he’s on this 1967 Topps card with outfielder George Spriggs. As a perfect side note, Spriggs would end up on a 1968 Topps Rookies card for the Boston Red Sox, despite the fact that he never played for them. He was a Rule 5 pick over the 1967-68 off-season, who was returned to the Pirates before the 1968 season started. 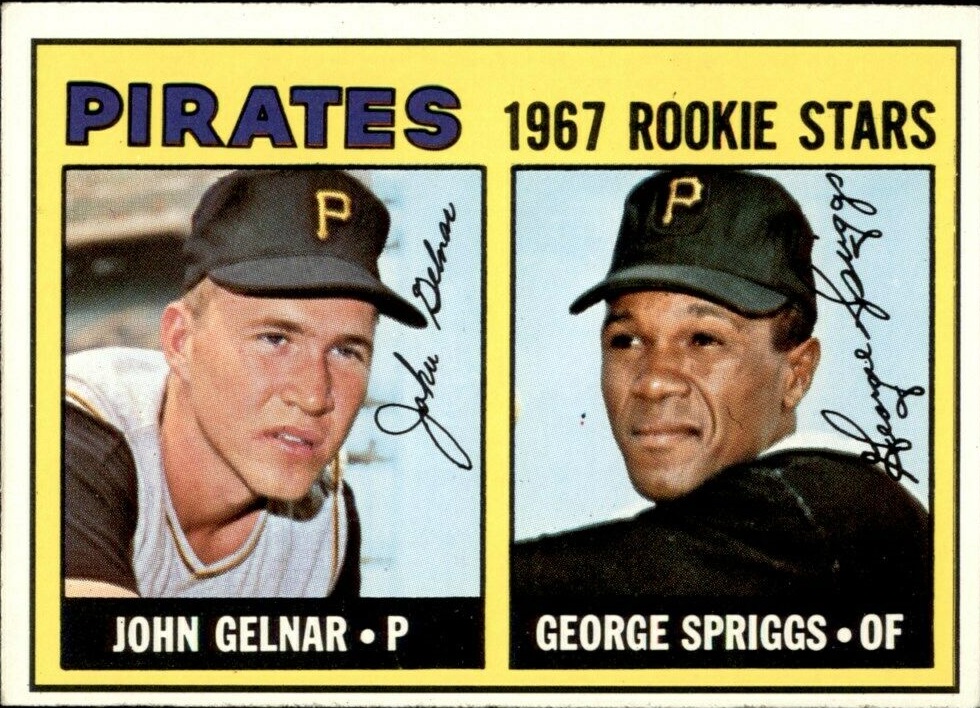 Spriggs, who passed away in December of 2020, was born on this date in 1937. It really felt like in that intro that John Gelnar was the reason I picked this card, but it was Spriggs. Coming into the 1967 season, Spriggs played a total of 18 games for the Pirates, nine in 1965 and nine more in 1966. All of those games were off of the bench and he played just two innings in the field. He was used either as a pinch-runner or pinch-hitter in the other 17 games. Spriggs played 38 games for the Pirates in 1967, then finished his big league career with 74 games for the 1969-70 Kansas City Royals. His son Geno Spriggs was a draft pick of the Pirates out of high school in 1987, who passed away tragically after a car accident in December of 1988 at 20 years old. Both George and Geno were signed by the same scout for the Pirates, Joe Consoli

Gelnar debuted in the majors in 1964, pitching seven games in relief for the Pirates. He was 21 years old at the time. Those are two good reasons to put someone on a Rookie Stars card in 1965. However, when he reappeared in the 1967 set, he still had just seven big league games. He pitched 19 innings for the 1967 Pirates, then got his only real chance in the majors with the Seattle Pilots in 1969, staying with the team when they moved to Milwaukee the next year.

Spriggs and Gelnar were extremely similar when you look at their career path. Both had minimal big league experience prior to 1967. Both saw more time with the Pirates in 1967 than they did before that season. Both spent 1968 in the minors. Both got a better opportunity with an expansion team in 1969 and both set career highs for games played in 1970.

Topps avoided something here that I hated. There have been examples of them using the exact same photo for Rookie Star cards in more than one year. However, both of these players are shown in different poses. 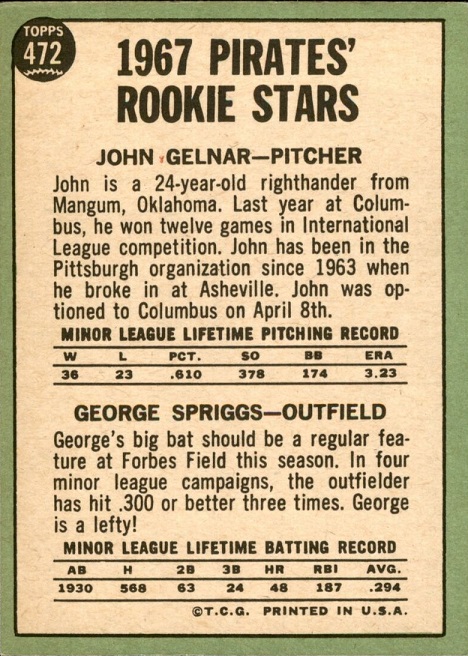 The back here has small bios for each player, as well as their minor league lifetime records. Two things to point out here. You can tell this card is a later series card without looking at the number (more on the series below in the value section). The back notes that he was optioned to the minors on April 8th. As card collectors know now, you can sometimes get new card sets coming out in December of the previous year (as in 2021 Topps coming out in December 2020). Only a later series card would have a fact from the 1967 season. For Spriggs, the back notes that he hit .300 or better three times and one of those times was .300 (1966). He was not a regular feature at Forbes Field in 1967, but he received more playing time than before. The final sentence is a great one. That exclamation point adds some excitement to being a lefty. He was not only a lefty, his first/middle name was George Herman, so there had to be a mention at some point of him being the next Babe Ruth. He fell just 713 home runs short of tying Ruth in the majors, though he hit more MLB homers than me, so I consider that quite a feat.

This card is very tough to find because it was in one of the later series, which adds to the value of the card. This was part of series six, released later in the year and it wasn’t printed in the same quantity as earlier cards. There are currently only three people selling this card on Ebay, though two are dealers that have multiple examples. Here’s a case where I highly recommend looking for an auction instead of a buy-it-now. This card will run you $20+ if you try to buy one now, but in straight auction listings, it has ended for as little as $3, though the condition was pretty rough looking. A decent one (ungraded) should run you around $8-$10. There just weren’t any in that price range at the time I wrote this up.

22 May 2021
Card of the Day
Featured, George Spriggs, John Gelnar