Today’s Card of the Day is our second offering from the 1941 Double Play set. The first one featured Hall of Fame shortstop Arky Vaughan on a two-player card that also depicted third baseman Lee Handley. The 1941 Double Play set was made up of 75 cards that each had two players. Each card had different numbers for each player so the checklist actually shows 150 cards. While a small percentage of the cards ended up being cut in half, most the surviving cards from 80 years ago are still intact. Cards #35 and #36 are together on one card and they feature two Pittsburgh Pirates pitchers, Bob Klinger and Mace Brown. Here’s a look at that card: 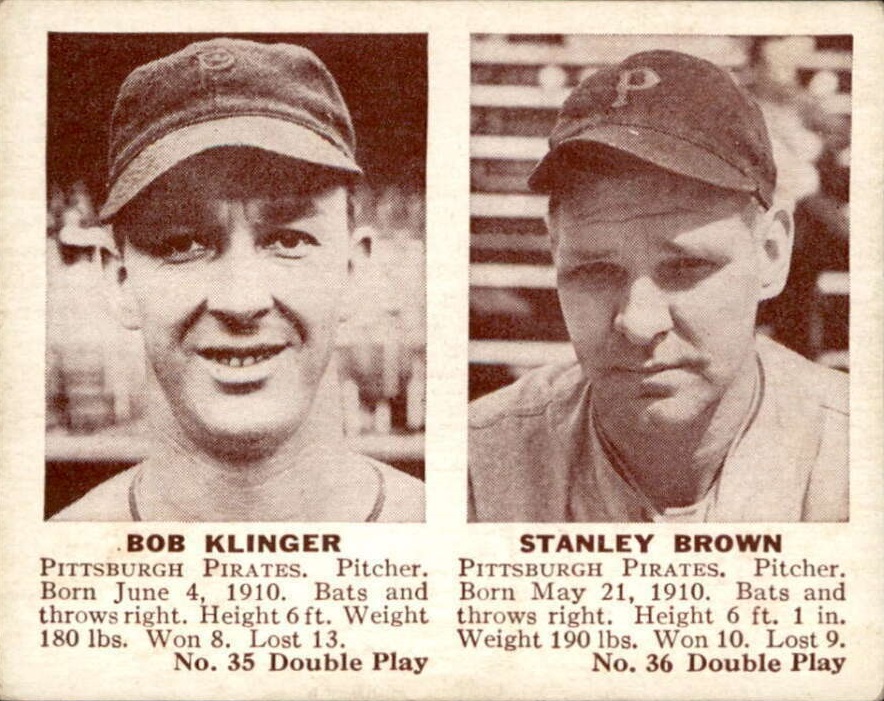 Today is Mace Brown’s date of birth as you can see on this card (check out This Date in Pittsburgh Pirates History article for more on him), though his birth year is now listed as 1909. I’ve mentioned this before, but it’s worth noting again. A lot of players from back then had wrong birth years, because they either changed their age to be older or younger, depending on their situation. If they wanted to get into pro ball earlier, they would add a year. If they were already older, then shaving a year or two off might get them a baseball job because teams would think they had more potential to grow as a player. I’d also say that a third reason you see a wrong age is that the cards could have just made an error, but Brown was believed to be a year younger than he actually was when he played, so there is no error here.

You may also notice that he is called “Stanley Brown” here. I’m not sure why, because Mace was actually his first name. A quick search on Newspapers.com just now produced 27,473 results for “Mace Brown” Pirates during his time in Pittsburgh, with the name needing to be written as “Mace Brown” for it to show up. Replacing Mace with Stanley produced just 825 results during that same time-frame, and not all of them were for Mace Brown. As I said, I’m not sure why they used his middle name here.

This card is a favorite card of mine from this era. I collected new/recent cards as a kid, but got into pre-WWI cards at a very young age and by the time I had my first job, my focus was T206 and 1887 Old Judge cards.  The middle years of cards (1920s-1951) mostly got ignored. Years ago I decided to get some of the better players from this era, so this card killed two rocks with one stone. I actually bought all of the Pirates cards in this set in one shot about 3-4 years ago. Mace Brown spent seven years with the Pirates and he was a top reliever, back when being a top reliever meant you couldn’t make the Hall of Fame pitching 2-3 innings per week. Bob Klinger spent six years with the Pirates and he won 62 games during that time. Neither were big stars in team history, but both players should be known to fans. Klinger has been in this feature before after I bought his 1939 Play Ball card and then shared it.

Going full circle back to the start here. Notice that Klinger’s card notes that he was born in 1910. That could be a card error. I checked a 1938 roster for Brown’s age before and saw the 1910 birth date. That same roster has Klinger being born in 1909. To add to the mystery, he was actually born in 1908, so the roster and the card were both wrong. He didn’t make his debut in the majors until he was 30 years old. The Pirates believed that he was 29 at the time, so the roster being wrong wasn’t a mistake on their part. He actually started in the minors at 21 years old back in 1929, but it took him nine full seasons and over 1,900 innings to make it to the show.

If you’re interested in this card, there are currently nine live auctions on Ebay. They are listed between $15 and $53. There is only one graded copy and it’s a PSA 4.5, which is listed for $34.79. There have been seven examples of this card that have sold in the last three months on Ebay and none of them went for more than $20, so an actual auction (compared to a buy-it-now) would probably be the best way to go.