There aren’t many card choices for one-time Pittsburgh Pirates pitcher Ed Whitson. Sure, he had plenty of cards during his day, but most of his day was spent somewhere besides Pittsburgh, and we try to limit our Card of the Day choices to cards that show players on the Pirates. He pitched 147.1 innings for the Pirates during the 1977-79 seasons. He also pitched over 2,000 innings combined between the San Francisco Giants, San Diego Padres, Cleveland Indians and New York Yankees. Even his short stay with the Indians (the 1982 season) produced four cards. However, if you want him on the Pirates, then the choice here is his 1979 Topps card shown below. 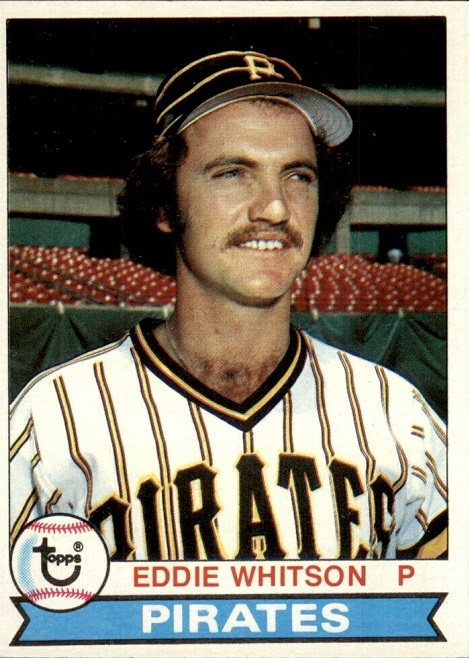 This is considered to be Whitson’s rookie card, produced after his only (nearly) full season with the Pirates. He made 43 appearances with the 1978 Pirates, all out of the bullpen. He also pitched for the Pirates during the final month of the 1977 season and he was around for the start of the 1979 season, until a trade to the Giants in June sent him packing and brought Bill Madlock back to Pittsburgh. I’ve mentioned that I’m not a big fan of the 1979 Topps set, partially due to the poor photo quality. We saw that with the card of Phil Garner recently and the Grant Jackson card used earlier in this series. This card has decent photo quality and you get a nice partial look at the striped tops from the mix-and-match era of uniforms.

I actually fibbed a little about there not being another Ed Whitson example for the Pirates, but it is an understandable fib. He is on their team picture from the 1980 Topps checklist card. Oddly enough (unless I’m missing it) I don’t see him on the 1979 Topps checklist card. He’s listed on the back obviously, but not the front. That tells you that the picture was taken early in the season, because he joined the club in May. 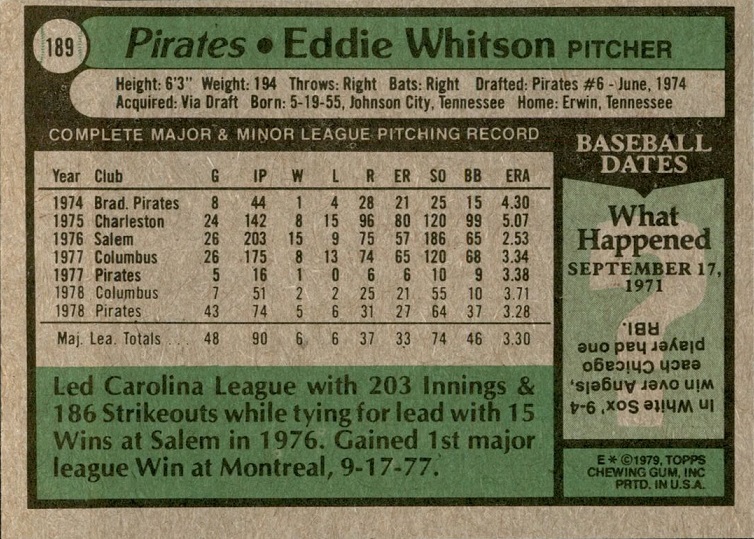 The back on this card has his complete minor league stats and his short (at the time) big league stats. Whitson was drafted out of high school, making him older for a high school pick, since he celebrated his 19th birthday a month before the draft. He was in full-season ball ten months after being drafted and made it to Triple-A within three years, followed by his big league debut four months after his 22nd birthday As you can see by the bio section, he made quite the impression during the 1976 season, putting him on track to make his debut the next year.

All 1979 Topps cards have trivia questions on the side and almost all of them have zero connection to the player on the front of the card. That’s a cool bit of trivia, though I can’t imagine too many people knew that answer with just the date as a clue.

This card can be found on a website called Ebay, where people go to buy and sell items. I go there mostly to look at things I don’t buy. There are 18 listings for this card and the cheapest one will run you about $2 delivered, with a few in that price range. Most are a few bucks more due to high shipping costs. Only two have sold in the last three months. Surprisingly, at least to me, none of the active or sold ones are graded or autographed. We usually see at least one of each with cards from the 70s, but not here.