Today’s Card of the Day was an early offering from Fleer before they started producing large sets in 1981. This 1961 set featured baseball greats and card #90 in the set depicted Babe Adams of the Pittsburgh Pirates. Adams was born on this date in 1886 and he spent 18 seasons pitching for the Pirates. He’s the franchise leader for pitching WAR, which has him ranked sixth in team history for WAR ahead of numerous Hall of Famers and greats in franchise history. We have featured him in this series twice before already, but this is our first 1961 Fleer card and his numbers clearly show that he deserves to be recognized often. 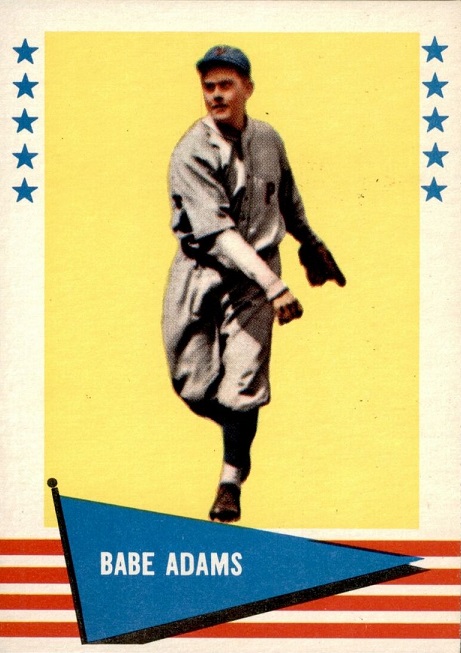 The 1961 Fleer set had a similar look for every player. Everyone got their name in a blue pennant, with red stripes behind it. They all got blue stars down the side. The one difference in the set between cards was the color of the solid background behind the players. They ranged from this light yellow offering, to a brighter yellow, to two shades each of orange, red, blue and green. These cards came in five-card packs for five cents and also included gum and a decal card. This uniform is colorized on Adams off of a black and white photo and that particular uniform combo didn’t exist. The colors are correct for the 1921 uniform only, but the “P” on the chest that year was bigger. The 1920 jerseys had the blue P that size, but they didn’t wear blue/red caps that season. In prior years, the P on the jersey was red. 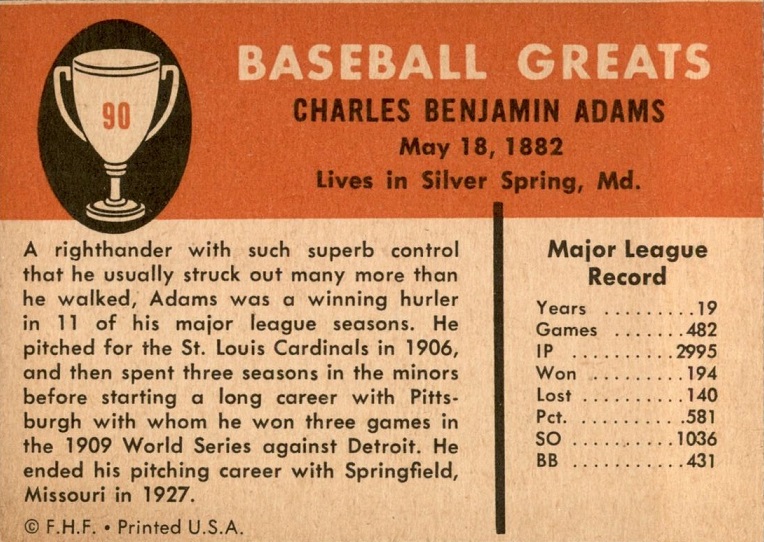 The back has something a bit unusual because it wasn’t true of every player in the set. Notice that it says that Adams “lives” in Silver Springs, Maryland. He celebrated his 79th birthday in 1961 and lived out another seven years in Silver Springs before passing away at 86 years old. The players who no longer graded the Earth with their presence by the time this set was released actually had what looked like tombstone writing on the back of their card:

I don’t believe that type of living/dead difference is displayed on any other back bio, but I could be wrong. I only noticed it here just as I’m typing up this article and I’ve known about these cards for a long time, so there could be another similar one.

Anyway, the backs here have a bio section and there’s a small mistake that isn’t 100% wrong here. Adams pitched with the Cardinals in 1906 and it was an early season start, so it’s true that he spent three years in the minors (1906-08) before helping the 1909 Pirates to the World Series, where he won three games. What can be misinterpreted by that is that is seems to say that he spent the entire time in the minors. He did not. He pitched four games for the 1907 Pirates. It’s not a huge surprise that he didn’t stick with them right away because his last start was 13 runs on 16 hits over six innings (a complete game called due to darkness) in the final game of the 1907 season.

The back also mentions his outstanding control. Unless there was a mistake made on the card, he seems to have lost a walk over time, not that his numbers needed any help. Stats change a lot over time with better research, just ask the ghost of Honus Wagner, who has seen his career hit total change three times (his 3,000th hit is celebrated on the wrong day every year now because it has changed over time). Adams is credited with 430 career walks now. He was never a huge strikeout pitcher, he had three seasons in the top ten in the league, but he never finished higher than fifth most. Those three seasons were also the same/only years that he finished top ten in innings pitched as well.

This card isn’t hard to find on Ebay. There are currently 16 auctions active right now, ranging in price from $5 to $89 (best offer option) for a graded copy. There are only two graded copies available. All six of the sold copies over the last three months went for under $10 shipped, so that’s a high mark you should set for price unless you want a near mint or better copy.