Today’s Card of the Day features right-handed pitcher Rick Rhoden, who is celebrating his 68th birthday today. He played for the Pittsburgh Pirates from 1979 through 1986, winning 79 games and pitching 1,448 innings. He’s been featured here once before on a card that highlighted his pitching performances by showing him batting. This is another card that highlights his pitching, coming from a 77-card set put out by Topps in 1987 called Topps Mini Leaders. These cards measure 2 1/8″ X 3″, compared to the standard card size of 2½” x 3½”. You won’t be able to see the size difference in the scans below, but it’s definitely noticeable when the regular and mini cards are side-by-side. 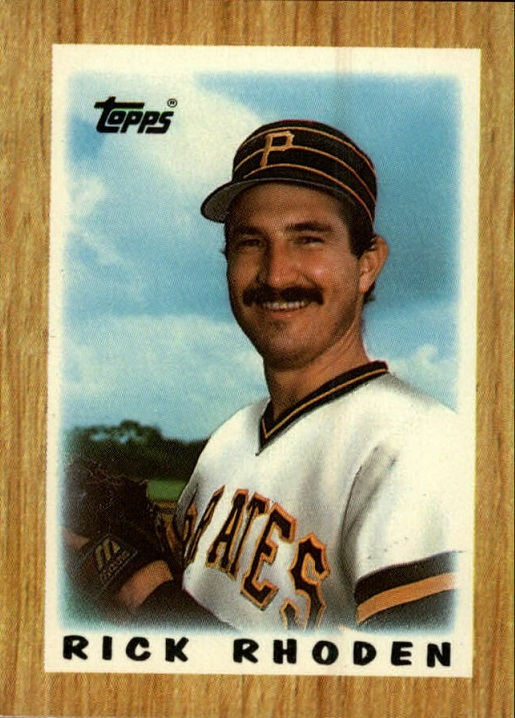 Rhoden was well represented by Topps in 1987. He has a card in the regular set showing him with the Pirates, despite the off-season trade to the New York Yankees. That trade led to a card in the Topps Traded set issued later in the year. These mini cards have a somewhat similar look to the regular issue set (and the Traded set) from 1987, but there are differences. The wood grain border is the one basic similarity, while this card has an extra inside border that is white and fades in around the photo. On this card, the player’s name was inserted in the white border, while the regular issue set had the name in a box partially in the bottom border, partially in the photo. For comparison sake, here’s his 1987 Topps card: 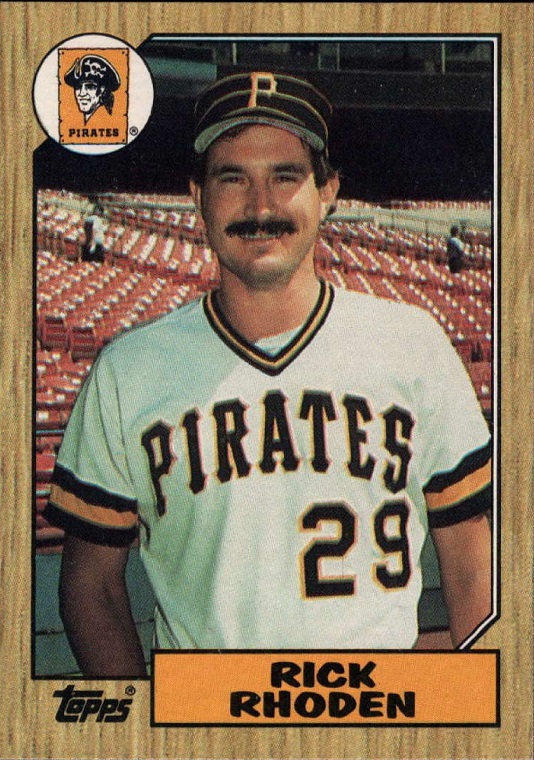 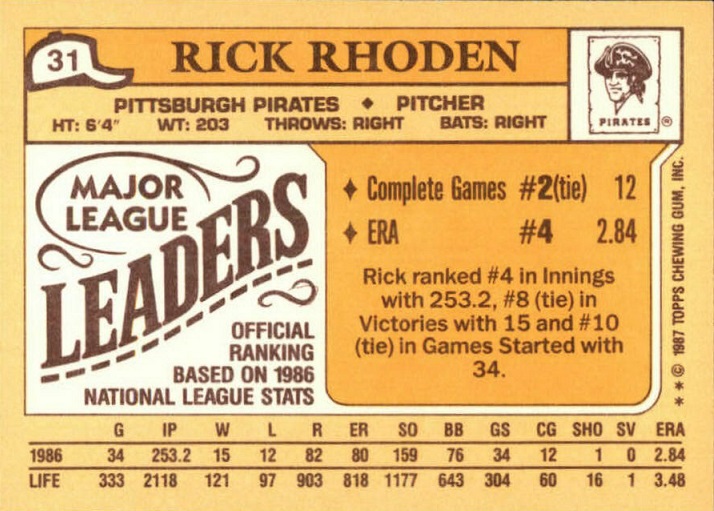 The back shows you why these cards are called “leaders”. Any player who ranked near the top in a major category in 1986 got a card in the set. So the set size was decided by the amount of qualified players. As you can see here, Rhoden ranked second in the league with 12 complete games and fourth in ERA. He was also top ten in innings, win and games started. I was curious so I looked up some stats. Two players actually made 39 starts in 1986 in the National League, Tom Browning and Rick Mahler. I was also a bit curious about those 12 complete games. That’s almost unheard of now, but not a big deal back then. The last time a pitcher threw 12 complete games in a season was 1999 by Randy Johnson. That’s right, it hasn’t happened this century. In the American League is hasn’t happened since 1993.

These cards were small, so they didn’t have a lot of room for info, especially with that big “Major League Leaders” logo taking up all of that room. There was one year of stats for players, along with their lifetime stats in 13 categories. The cherry on top of this back in that old Pirates logo in the top right corner. That always adds extra points.

This card isn’t readily available like most cards from this era, but there are nine options on Ebay right now, including a nice autographed card that is going for $13.49. You can pick up one without an autograph for about $2 delivered, but just make sure you check the shipping costs first because some sellers are asking much more for just the shipping than what others are asking for the total price.