Today’s Pittsburgh Pirates Card of the Day features a first-time player here. Pitcher Al McBean turns 83 years old today. He is the first Major League pitcher who was born in the U.S. Virgin Islands. In fact, just two other pitchers born there have made it to the majors since him. McBean played for the Pirates from 1961 through 1968, then returned in 1970. He has many Topps cards to choose from for this feature, so I went with a set that has been under-represented here so far. We have used just one card from the 1963 Topps set over the previous 14 months and that one included multiple players, so this is the first solo player card we are discussing here. The solo player card adds a bit of a different look as well. 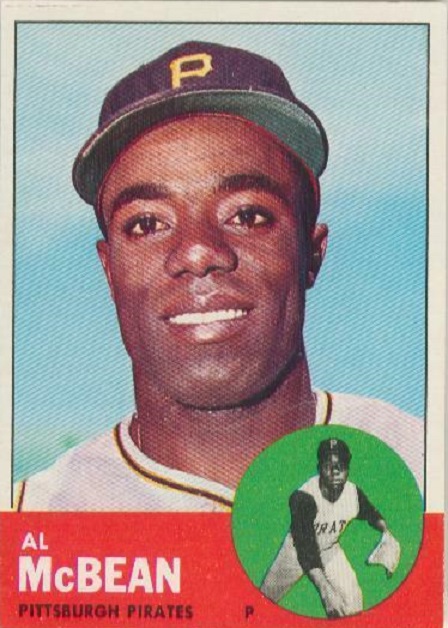 The 1963 Topps set provided a much different look than any previous offering. They had other cards with two photos of the player, but those were horizontal cards with two photos that were similar in size. These cards have a second player photo in a circle in the bottom right corner. There are many looks to this front design as far as color choices and wording. Here’s a breakdown:

The name here is in a red band and the player photo has a green background. That isn’t standard from the set, though a lot of cards have that combo. Here are the possible colors:

McBean’s card spelled out Pittsburgh and abbreviated pitcher. Topps abbreviated Pittsburgh as “Pitts.” on some cards and spelled out the position on some cards. There doesn’t seem to be any method to their madness as far as decisions as whether to abbreviate or not. I’m not sure if that was a quality control issue or they just wanted to make people wonder about it 58 years later when they went to write an article about the set. 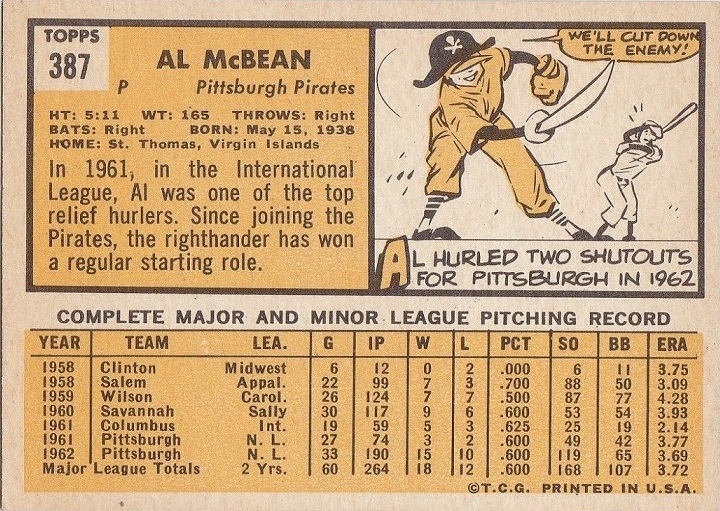 The back here is nice and bright and easy to read, not something that always happened with Topps. I always appreciate when they included complete stats for minors and majors. This one went a bit deeper and gave you the league that they played in as well. It would help if you had a knowledge of the leagues so you know what level he played at each season. The Carolina League to the South Atlantic League would have been a demotion years later, but he actually moved from Class-B up one level to Class-A at the time.

The cards had a cartoon included that gave a fact on the player. They used the same generic player for everyone that looks unlike any real player ever. However, I noticed that the few I looked at from 1963 to get an idea here all look like they are about 12 years old. I also believe that bringing a sword to the mound could result in a lot of shutouts, so McBean throwing two in one season isn’t that impressive.

This card is very common and easy to find on Ebay in whatever grade you want. That availability keeps the price down. His PSA 8 card has the highest price right now out of 140 auctions, and it’s only $43 delivered. In fact, you can get a PSA 8 for as little as $36. Ungraded examples in nice shape have ended for as little as $5 delivered, and lower grades ones that are still highly presentable have ended for $2-$3. The lowest priced buy-it-now auction up on Ebay at the time of this writing had a $2.43 price tag, which included shipping. There are a few autographed versions available and they go for about $16 each.