When we first decided to have a history site, one of the first things I did was pay tribute to George Grantham because he’s much more obscure than he should be in Pittsburgh Pirates history. I was acknowledging that he didn’t get enough attention. About ten days before this article was published, I decided to look to see if any important players were missing in this Card of the Day series. Surely after 14 months I must have covered every important player, right? Assuming you’ve already read the title, then you know where I am going with this ramble. The player who I thought deserved much more attention hasn’t been in this daily series yet. I noticed his birthday is fast approaching, but I decided to not wait a day longer to feature him here. 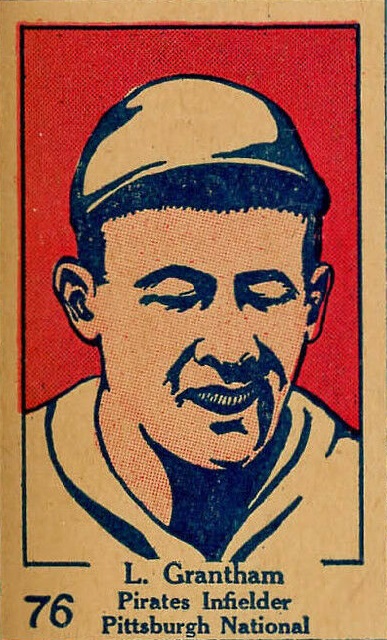 Perhaps my choice of the specific card for Grantham should have been better, but I wanted to get him on the Pirates, so that limited my choices. He has a great card in the Exhibit set, but I’ve had a few of those cards here semi-recently. Also, this card just has the look of a player who is suffering from being obscure for no good reason. He does not look like he’s alive in this “art” and his teeth look like a zipper. This isn’t the worst strip card art either. There are quite a few of these sets from this era with downright awful artwork. In fact, this card is so bad that it takes some time to notice that they got his first initial wrong. One thing here that you don’t often see with older cards is the word “Pirates” on front of the card. Most cards from back then (even back into 19th century cards) either said Pittsburgh/Pittsburg or Pittsburgh National. That to me is quite literally the highlight of this card.

So you may not know Grantham well enough and you want to know why you should know him better. There will be a full bio on him soon (May 20th birthday), but we can give a glimpse here. He is the only Pirates player who played 7+ seasons with the club and posted an .850+ OPS every year. That means that he was with the Pirates for a long time and he was good every single season. He batted over .300 every season in Pittsburgh. In Pirates history, out of all of the greats who have played 750+ games with the Pirates (62 players, not including pitcher Elroy Face), only Ralph Kiner has a higher OPS. Not Wagner, not Clemente, not Waner, not Vaughan, not Bonds, not Stargell. Just Kiner. Am I saying that Grantham is better than those players? No, not even hinting that he should be in the same category. However, I’m saying that the second best OPS in team history, for a team that he so many Hall of Fame players (12 in that 750+ games group), should be much wider known among the fanbase.

This scan was the only one from the W513 on Ebay and it is graded PSA 8. The price is $249, so I know most of you wouldn’t even consider that for a half of a second, no matter how much you wanted this beauty. The price is high because of the grade. It’s tough to find these cards high grade because of their age and the fact it was usually younger kids cutting them up. Scissors from the 1920s must have not come with accuracy training, but I have seen some major hack jobs on strip cards over the years. The best thing a strip-cutter could have done back then is cut the cards much bigger than needed. Trimming cards is frowned upon heavily in the card collection industry, but for cards that were supposed to be cut in the first place, a touch up job now isn’t as bad, as long as the card meets the minimum size requirement. There have clearly been some improvements made to big cut cards over the years. I have no idea if that happened with the card above, but (condition-wise only) this is surely a great looking example from this set.