Today’s a good day to knock off the first card from another set. The 1979 TCMA set features former players from the 1950’s and is often referred to as the Stars of the 50’s set. Jack Shepard was never a star player, but he played his entire big league career with the Pittsburgh Pirates, debuting in 1953 and playing his final game at the end of the 1956 season. He played 278 games in the majors and he put up positive WAR numbers in each of his three full seasons, so maybe he does qualify as a star from the 50’s in a card set that has 291 players. 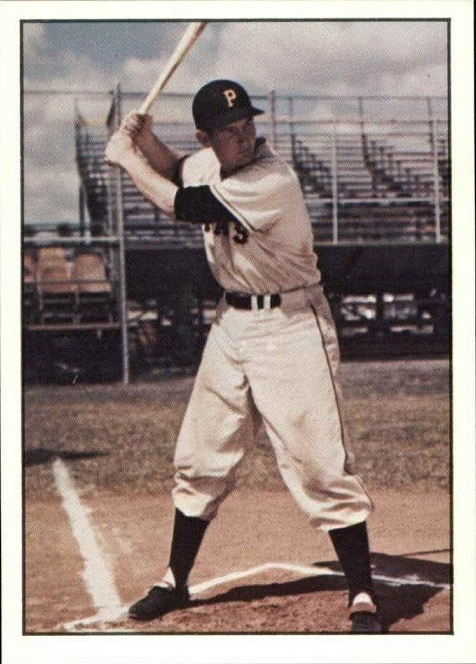 Sometimes simple works with the front design on cards. TCMA’s staff meeting for this design took about 30 seconds before they took a lunch break. Any suggestions for the front design…yes, Jim, who is already looking at the lunch menu. Jim says “How about white border around the photo, black border for the photo, and the photo takes up 90% of the front?” Sold, let’s go to Sizzler.

Fictional Jim didn’t have an original thought that day, but I like this set because they have a great selection of photos with that 1950s feel to them. They are all staged action photos of course, but there’s none of those Topps closeup portrait type shots with the guy (without a hat) looking off in the distance and no visible markings on the uniform, so it didn’t matter what team he was on, you could use the shot. The picture quality for all of the players was strong. The Shepard card is a great example. He’s not really in the middle of an at-bat, but it has that look and you get to see the full Pirates uniform from the 1950s, with the batting helmets that they had to wear starting in 1953…yes, before 1953, players rarely wore batting helmets (or anything similar affording protection for the head during at-bats) at any time in baseball history. Shepard never knew the freedom of being able to take a fastball to the coconut without the protection of a batting helmet while he was in the majors. 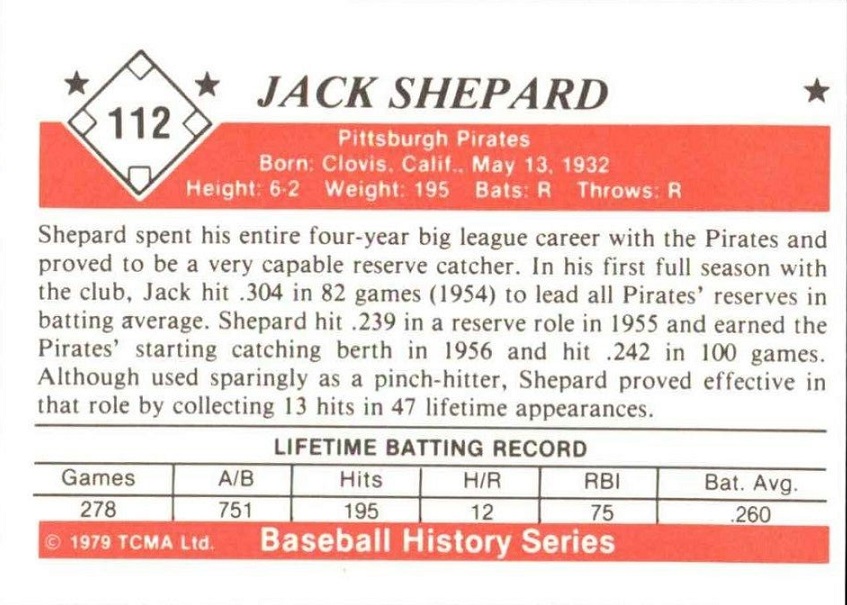 The back of these cards had a bio for each player and their career stats in six categories. Again it’s a fairly simple design, but they took more time than they spent on the front when figuring it out. As you might expect from someone who played 278 games over four seasons, Shepard wasn’t a full-time catcher during his brief career. He started 204 games during his career, but the split was fairly even over a three-year stretch, so the bio here isn’t 100% accurate. He started 71 games in 1955 “in a reserve role”, then started 71 games as a “starting catcher in 1956”. I’m sure you see the problem there. He was basically a platoon catcher for the 1954-56 seasons, first with Toby Atwell (1954-55), then with Hank Foiles (1956).

These cards are somewhat easy to find individually on Ebay despite the fact that they were only sold via mail order. They are cheap, even for the great players. This card will run you about $2-$3 delivered and you have about five options in that range, some a little more due to higher shipping charges. A great thing here is that there are five options for autographed cards. Shepard lived until he was 63 years old, which means that he passed away 27 years ago. That gave him about 15 years to sign these cards and he was obviously a generous signature. An autographed card will run you about $25 and he has a very nice signature, unlike most of the garbage/rushed autographs you see from current players, where you can’t even read their name.