Sometimes I surprise myself here when I go back through the old articles to help figure out a Card of the Day choice. With 14 months of articles, averaging about six of these articles per week, today is the first time that I am featuring the 1953 Topps set. I’m a big fan of this set. It has one of my favorite cards of all time, though it isn’t a Pittsburgh Pirates player. The 1953 Topps Satchel Paige card is one of the first old cards I bought after I got my first full-time job. Today’s feature player is pitcher Johnny Hetki. He’s also here for the first time, though that’s not a big surprise. He was a relief pitcher for two bad seasons during the 50’s, though he did well during the 1953 season. Hetki was born on this date in 1922, and lived a long life after baseball, passing away at 96 years old in 2019. He only has two choices for cards here and we have posted cards from the 1954 Topps set three times already, so going with his 1953 card became an easy choice. 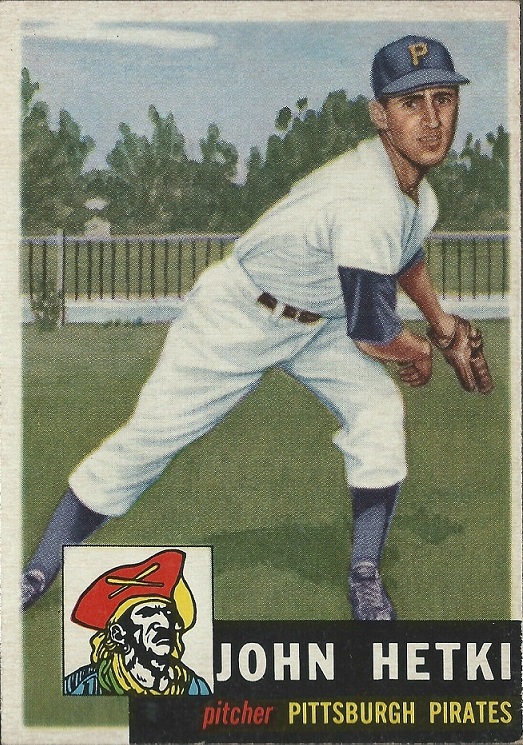 The artwork here on Hetki isn’t bad. There is a clear resemblance to him, but it’s not the best job by Topps either in this set. As mentioned, the Satchel Paige card is one of my favorites and part of the reason is the great artwork. I’m a big fan of action shots of portrait style photos, which there are a lot of in the 1953 set. As any regular reader of this feature should known by now, I’m also a big fan of the team logos on the front and the Pirates had a great one back at this time. That’s a pirate you want to go to war behind.

Topps did something interesting in the 1953 Topps set that works great for the Pirates. You look at that black box with his name/position/team and you see “Pittsburgh Pirates” written in yellow and you automatically think that they matched this up to the Pirates team colors. However, all of the National League teams got the black box and yellow team writing, so it just worked out well for the Pirates. All of the American League teams have a red box for the name/position/team, also with yellow writing. In some future years, Topps would match the team color to the design of the card, which is why the 1981 set ranks as one of my favorites all-time.

If you don’t collect these cards, then the scan wouldn’t help show you one interesting fact. These cards were slightly bigger than you standard size cards from the last 50+ years. Topps printed their first few sets at a different size than anything else printed since. Not a huge difference, measuring 2-5/8″ x 3-3/4″, compared to the 2-1/2″ x 3-1/2″ standard size used since 1957. 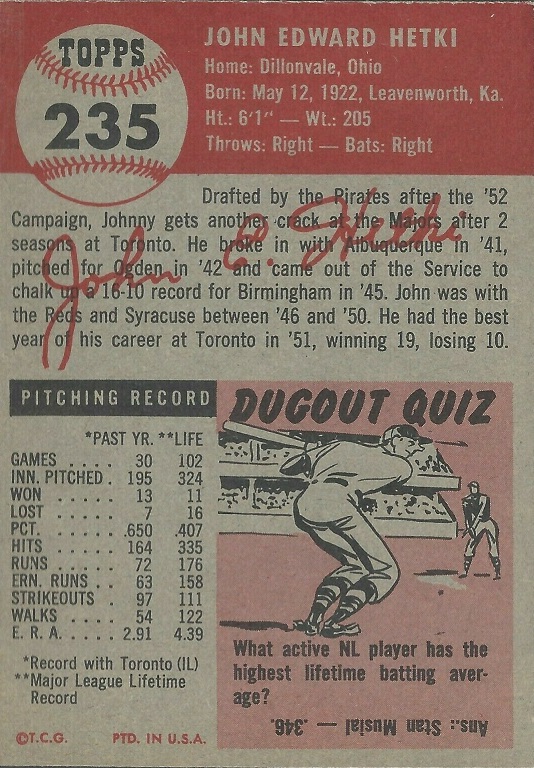 The backs of these cards are great looking as well, with a lot going on. The logo design for the card number is great looking. They have a nice little bio section for each player, along with a facsimile autograph that makes it a big harder to read. The stats section is much different than you are used to now, with one year of stats and lifetime stats written top-to-bottom instead of side-to-side. Topps chose to use minor league stats from 1952 instead of his brief time in the majors, but the career stats are his big league totals. Then there’s also a Dugout Quiz for each player that usually (possibly always since I haven’t read them all) has nothing to do with the player on the front of the card.

I didn’t mention it on the front, but the card number here tells you something important. As I mentioned, Hetki was on the 1953-54 Pirates, so for him to have a 1953 card showing him on the Pirates, it had to be printed at a later time in the year. He didn’t pitch in the majors at all in 1951 and barely appeared in the majors in 1952 (with the St Louis Browns), so he wouldn’t have been a top choice for a set that only had 274 cards if they were all printed early in the year. However, he was a workhorse in the Pirates bullpen from the start of 1953, so that got him included in the third (and final) series once they were printed.

If you’re interested in this card, head on over to Ebay (when are they going to start sponsoring these articles?) and check out the selection. You can buy from somewhere else, but I go there for price ideas. There are currently (as of the time of this writing) 48 examples on Ebay, ranging in price from $13 for a low low grade to $260 for a PSA 7. Completed auctions show a low grade one selling for $5.50 and a PSA 7 selling for $158, with 41 other sales between those price ranges. The 1953 is popular now, so the stock is always changing on Ebay, with cards changing hands often.