Today’s Card of the Day features a Pittsburgh Pirates all-time great pitcher who has not been included previously in this series. Truett “Rip” Sewell was born on this date in 1907 in Decatur, Alabama. He played for the Pirates from 1938 through 1949, winning a total of 143 games, which is tied for seventh most in franchise history. He had back-to-back 21-win seasons in 1943-44. Not only were those the only 20-win seasons for the Pirates between 1931 and 1950, it was also the last time that a Pirates pitcher won 20+ games in back-to-back seasons. He’s from an incredible baseball family that includes four MLB players, including Hall of Famer Joe Sewell, and a cousin Luke Sewell, who played 20 years in the majors. Not only is this the first time we are including Rip Sewell, it’s also the first time for the 1949 Bowman set, so let’s get right into this piece of cardboard artwork. 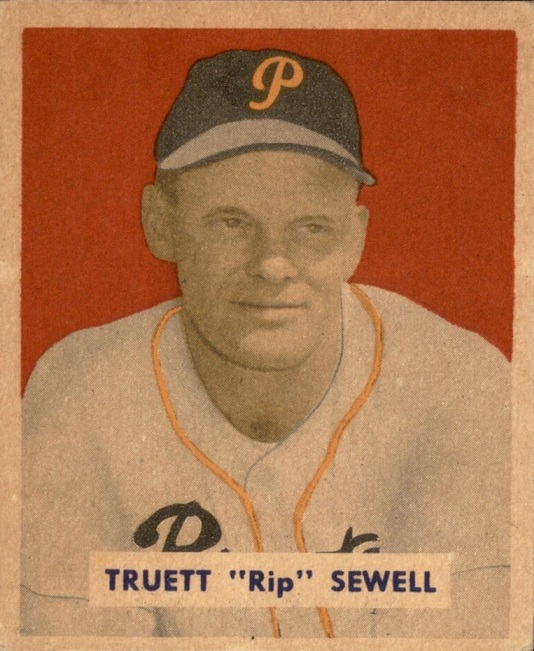 Bowman produced a set of cards in 1948 using black and white photos. They included just 48 cards in the set, but it was their first attempt at a baseball card set and it’s quite popular now due to the player selection. In 1949 they decided to do a colorized set and they expanded to 240 cards. The front design is very simple. Off-white borders with a solid background for each player, along with a box near the bottom of the photo for their name. Not every player has their name on the front of the card. Many of the players have their nicknames on the front. Sewell is (and was back then) better known for his nickname. A search on Newspapers.com for “Rip Sewell” (in quotation marks so they have to be found next to each other to show in the results) between 1940 and 1949 turned up over 59,000 results. Searching for “Truett Sewell”, you get about 1/3 of the results, and many of those often included his nickname in the article. Despite pitching pro ball from 1931-37, the nickname doesn’t show up in print until 1938 and there’s no specific reason behind it, other than Rip was a popular nickname back then and apparently his wife bestowed it upon him. 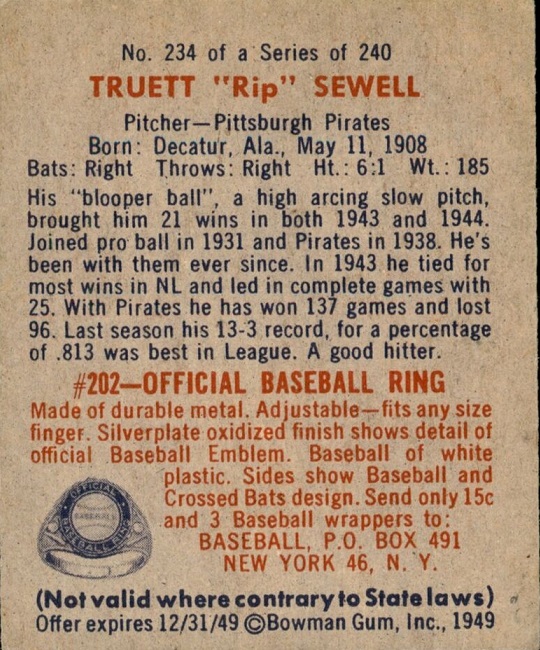 The back is trying to call me a liar. I’m not 100% sure why he is listed as having a 1908 birthday, but birth dates were wrong often back in the early days of baseball, usually for one of two reasons. Players either claimed to be older at a young age to get into pro ball sooner, or they claimed to be younger so they wouldn’t get overlooked as a potential prospect. Rip Sewell debuted in pro ball at 24 years old, so I could see him shaving a year off of his age to help his cause.

The bio section on the back mentions his famous eephus pitch, which it was called long before 1949 when this set came out, so they missed an opportunity by calling it the blooper ball. This set is actually from his final season in the majors when he went 6-1, 3.91 in 76 innings. I like how it ends, almost as if they needed three more words to fill out a quota and they went with “a good hitter”. He hit .203 in the majors, with six homers.

These cards are somewhat difficult to find. There are just four options on Ebay right now and they range from $45 to $79. Under completed auctions in the last three months, you will find just five sales, with the lowest one going for $12.50 in pretty rough shape. If you want a nice presentable one, you should be looking to spend at least $30. Happy hunting!