Today’s Pittsburgh Pirates Card of the Day comes from the 1940 Play Ball set and it features pitcher Russ Bauers, who spent the 1936-41 seasons with the Pirates. He was also born on this date in 1914 in Townsend, Wisconsin. The is the first time that we have included Bauers in this series, and it’s the second 1940 Play Ball card. The first was Hall of Famer Frankie Frisch, who was the manager of the Pirates at the time. Bauers burst onto the scene with a strong first full season in the majors in 1937, followed by an equally impressive sophomore campaign. His career started to fade at age 25 and he compiled just 82.2 big league innings after his age 26 season. He was still a young pitcher with potential when today’s Card of the Day was released. 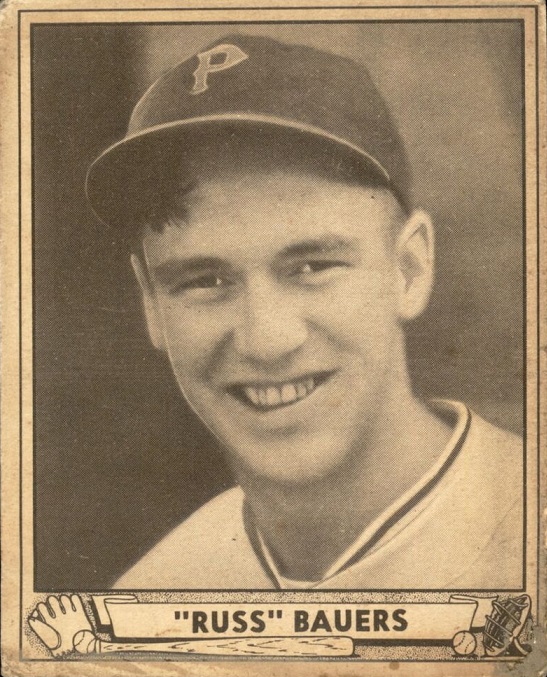 The 1940 Play Ball set had an off-white look to it with a black and white photo of the player. The photo of the player was inside a bigger box and the only design on front was under the photo, with the player name in a banner, along with a glove, baseballs, a bat and a catcher’s mask. Bauers has his first name in quotation marks for no reason. That’s usually done for a nickname, but his name was Russell. In fact, his name was often written out as Russell in headlines, so they could have just put that on the front and it would have been fine. 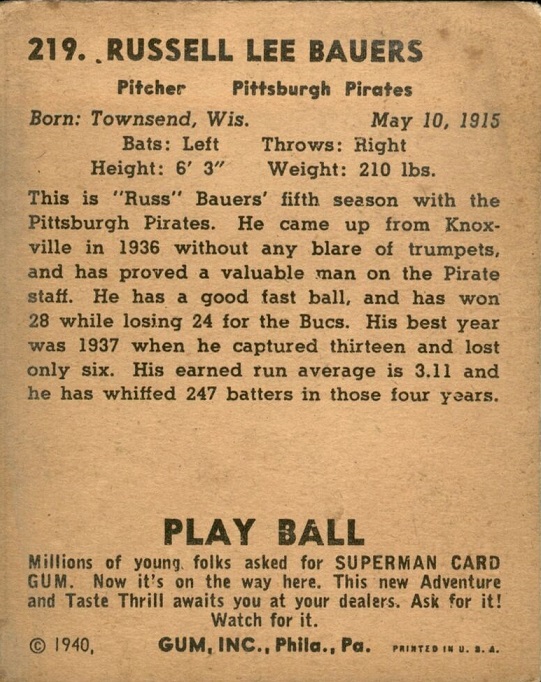 This is often referred to as the “Superman” back because it has ads for the upcoming SUPERMAN CARD GUM that millions of young folks asked for, and now it’s on the way! This new Adventure and Taste Thrills await you at your dealers. Ask for it! Watch for it. That’s quite a sales pitch, with random words capitalized and telling kids to add emphasis to how they ask for Superman Card Gum, but then they tell them to tone down the enthusiasm while they wait for it.

The 1940 Play Ball set didn’t list any stats by number, but they had a bio section for statistical highlights. Again with the “Russ” in quotations, as if that’s considered to be a nickname for Russell. The Joe DiMaggio card in the set doesn’t say “Joe”, despite the fact that his name was Joseph (okay, technically he was born as Giuseppe, but you get the idea).

The stats here don’t tell the whole story for Bauers, so I might suggest his bio from this morning instead. He had two big seasons in 1937-38, compiling a total of 7.2 WAR during those years. He finished his career with 6.4 WAR, so that tells you a bit about his other six seasons. He basically peaked at 24 years old. In 1940, most people still expected some kind of bounce back you would assume. He wasn’t bad in 1939, he just wasn’t healthy most of the year. He had a rough 1940 though, resulting in a 7.63 ERA in 15 outings.

This card isn’t difficult to find, but there aren’t a ton of options either. Right now on Ebay, there are eight active auctions that range in price from $29 in worn condition (ungraded) to $112 for a PSA 7 example. The completed auctions over the last three months show that four have sold in the $23 to $45 price range. Someone also sold one that had numerous holes and indents on the front, with the card going for $5 to a real budget collector. There are also reprint cards available, which had white borders on front to easily tell the difference. It also says “reprint” in small letters on the back.