Rarely is a Major League player better known for something else besides being a player, and usually the outliers are Major League managers, such as Connie Mack, Walter Alston, Tommy Lasorda, Sparky Anderson and Danny Murtaugh, just to name a few. Tony Bartirome was a 20-year-old starting first baseman for the 1952 Pittsburgh Pirates. When the season ended, so did his big league career. He played in the minors for quite some time after 1952, but he is better known for his 19 seasons as a trainer for the Pirates, including the 1971 and 1979 World Series champs. Despite playing just one season, Topps put him in two sets, and his 1952 Topps card is both rare and pricey. 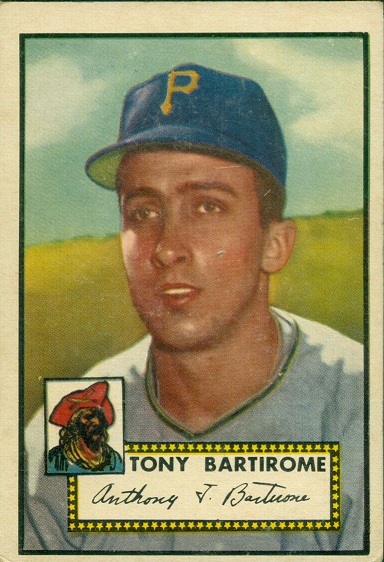 The 1952 Topps set is iconic. It’s the first major set produced by Topps and it includes the “rookie” card of Mickey Mantle, which is one of the most valuable cards in existence. I quoted rookie because he had a 1951 Bowman card, but some people still consider his first Topps offering to also be his rookie, and it’s worth much more than the Bowman card. Mantle wouldn’t have carried the set to an iconic status if it didn’t also offer great artwork for each player, along with a nice design that included the Pirates name, facsimile autograph and the team logo. Team logos will always get you extra points. The main issue here is that Topps apparently didn’t get the memo from four years earlier that the Pirates dropped the blue from their uniforms. The Pirates hats in the 1952 set are show as having the “P” in white, yellow and red. The artists were working off of black & white photos obviously and there wasn’t a lot of uniformity in the uniforms. 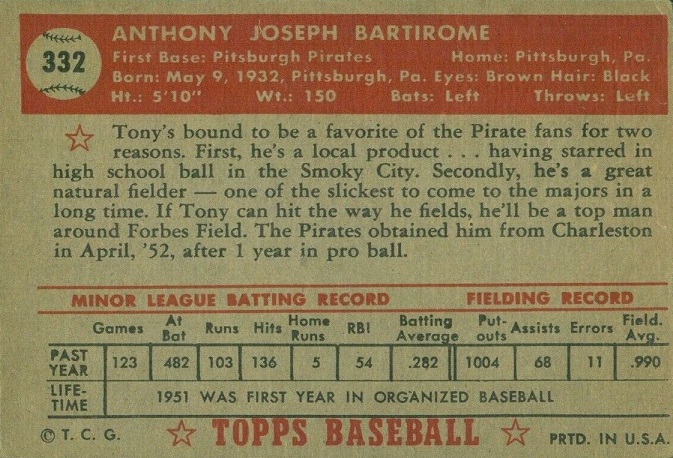 The back tells you a little about the printing date here. We are used to cards coming out long before the season now. If that happened back then, Bartirome wouldn’t have a 1952 Topps card. In the early days of Topps, they released cards in multiple series, allowing the later series cards to include players who weren’t in the majors during the previous year. This card tells you that he was with the Pirates in April of 1952. That wasn’t a lucky guess by Topps. They printed the final series some time after April.

Back in the early days, Topps thought it was a good idea to include eye and hair color on the players. I guess if most people were seeing the players in black&white, then it was interesting to know more about them. All of the players in the set had one year of stats (1951) and then their lifetime stats. Bartirome shows you how Topps handled players with just one season in pro ball. The limited stats, which included fielding stats, left room for a nice bio section for each player.

As mentioned up top, this card is a very tough card from the 1952 set. It’s from the sixth series, which was already short-printed. The story goes that Topps massively overestimated the interest in their final series and ended up throwing out cards (some say they got dumped in the river), so the cards from the final series are very rare, unless they were one of the double printed cards. There is also a collector out there who is “hoarding” Bartirome cards, making them even harder to find. That has led to some big prices for his cards. Right now on Ebay, there are four for sale. One is heavily trimmed and it’s still $433. Two are low grade in the $1300-$1400 price range. A fourth is high grade and the asking price is $6,700. Ten have sold on Ebay in the last three months and all of them went for over $1,000.