Today’s Card of the Day comes from a player who had an odd career path, coming to the Pittsburgh Pirates as a prospect, going to Japan to establish himself, then coming back to the U.S. for one big season. Orestes Destrade had a 15-year career in pro ball and hit over 300 homers. He was a rookie prospect for the New York Yankees, who was blocked at first base by Don Mattingly. He came to the Pirates in a trade just prior to Opening Day in 1988 and got a small trial before being sold off to Japan. When he returned in 1993, he was the first baseman for the expansion Florida Marlins in 1993, where he hit 20 homers and drove in 87 runs. Just as quick as he was good in the majors, it went away. By 1995, he was back in Japan for his final season of pro ball.

Destrade was with the Pirates long enough to get two cards. One was a Score Traded/Rookies card in late 1988, and the second was a 1989 Topps card, which many people were getting in packs after he was already in Japan. On his 59th birthday, here’s a look at his 1989 Topps card. 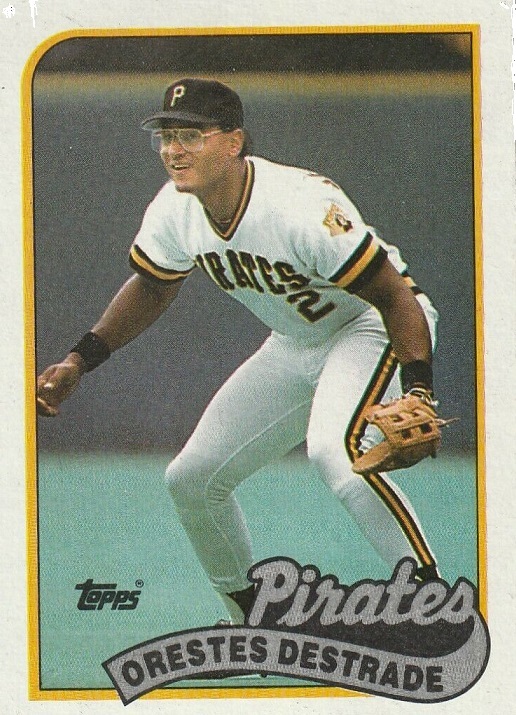 I’ll be honest here, I wanted to use his 1988 Score card, but I couldn’t find good enough scans. It’s not that the Score card is any better looking (I like this one better for looks), it’s just that there is a big difference in the production numbers of the two sets. The 1989 Topps set was massively overproduced. You could buy 100 full sets, burn those 79,200 cards, and it wouldn’t do a single thing for the value of the remaining cards. No one would miss them. If you did that to an equal amount of 1988 Score Traded/Rookies cards, someone would notice.

I’m glad I ended up with this card though because it has an error version that I didn’t know about. Nothing major as you will see in the back and price sections below, but I like when I am also learning about cards when I write these articles.

I wasn’t a big fan of the 1989 Topps cards when I first saw them, but it has grown on me since then. Possibly it’s because I like seeing older uniform styles and when I first saw this set that was the current style. However, I now like the Topps cards that used team colors in the design. If they used team colors and put a team logo on the front, then it’s an automatic win, regardless of the rest of the design. I like the gold border around the photo, and the use of gray and black for the player/team name. It’s basically like the road jersey colors from that time. 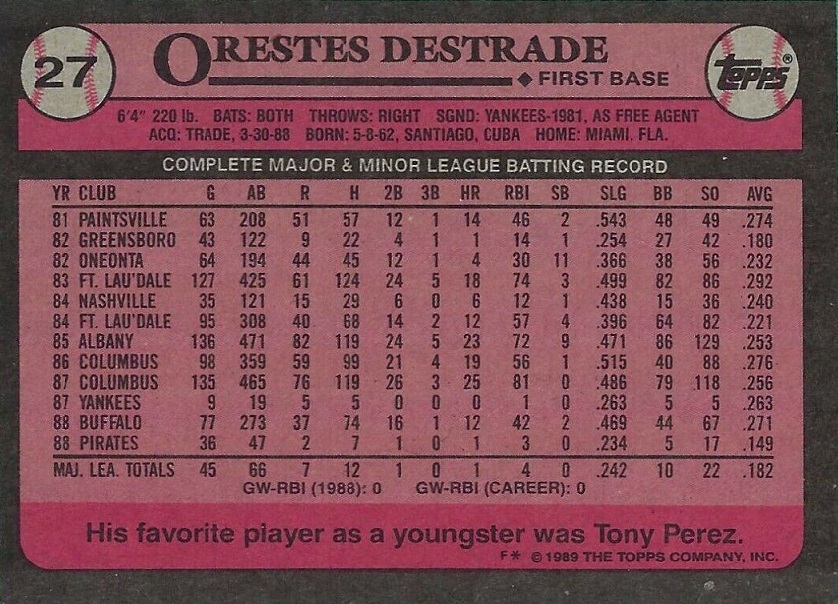 I’m in the middle on the backs here. Nothing fancy, as Topps was fairly boring with backs during this time. I always appreciate the full pro stats for a player when possible. I also like the throwback game-winning RBI stat, which was a big thing for a time until owners got upset about players using it in arbitration to get more money, then it went away. At least that’s how I remember it happening, could be wrong, but I like the story so I’m not looking it up. You could have guessed that a first baseman born in Cuba in the 1960s liked Hall of Famer Tony Perez as their favorite player. He was a favorite of a lot of people, even those who didn’t play first base (or third base, as he spent five seasons there too).

This card is the corrected version, and remember, I said it wasn’t major. See that “F*” on the bottom. That’s what is supposed to be there. The error version said “E*F*”. Those letters refer to the printing sheet cards were produced on, so you wouldn’t have two letters for one card unless it was an error.

This card is easy to find on Ebay and there are plenty of examples in the $2-$3 range, some even slightly cheaper. The error/corrected versions don’t differ in value and many people don’t know about it, so it’s usually not even mentioned in the listing. There are a few autographed copies available (done after the cards were released), which adds about $5-$10 to the value.

8 May 2021
Card of the Day
Featured, Orestes Destrade