On this date in 1925, Pittsburgh Pirates shortstop Glenn Wright turned an unassisted double play on a ball hit by Hall of Fame first baseman Jim Bottomley of the St Louis Cardinals in the top of the ninth inning of a 10-9 games. The Pirates still ended up losing, but Wright forever etched his name into the baseball record books that day. Three years later, Wright was featured on a card put out by the Exhibit Supply Company. The cards are now know by just the name Exhibit, and card #28 in the 1928 set features Glenn Wright. 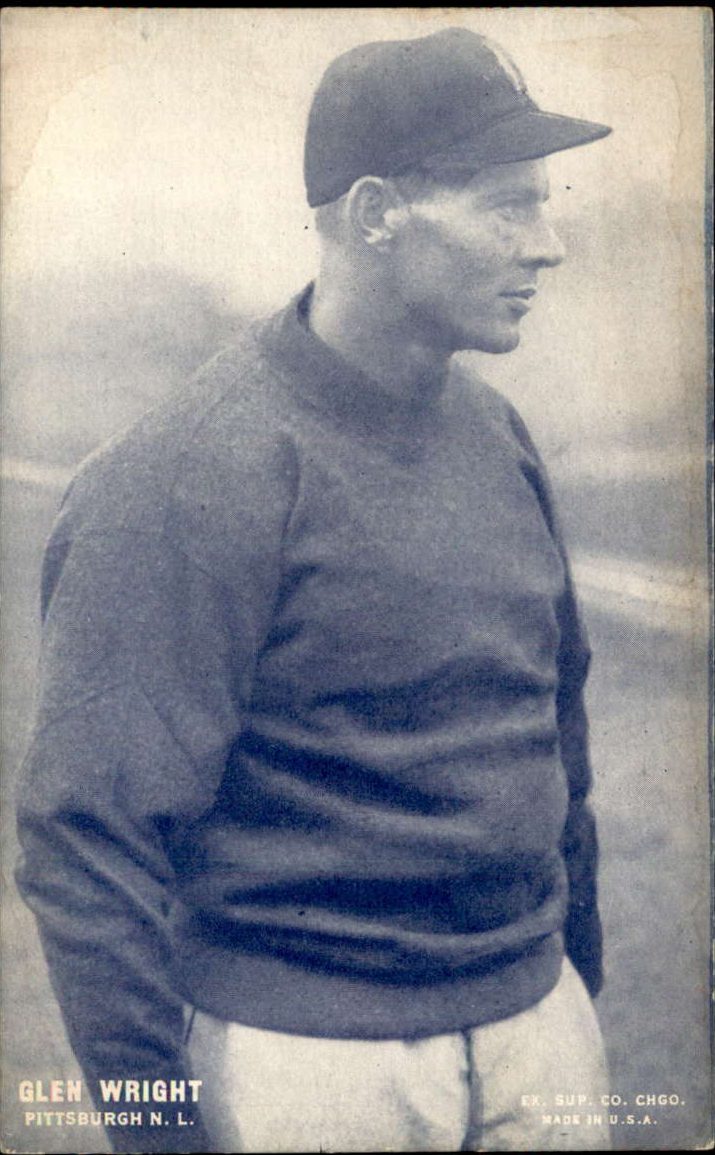 The cards are much bigger than your standard card size now. They are 3-3/8″ by 5-3/8″, compared to the 2-1/2″ by 3-1/2″ size you usually find these days. As mentioned, the back here is blank, though some of the cards had what is classified as postcard backs and those are tougher to find.

The Exhibit cards were not fancy with their designs. The front of the card is all photo, no borders of any kind. The only thing on the front is the player’s name and team in the bottom left corner and then small writing telling you very little about the Exhibit Supply Company in the bottom right.  Notice that his first name is spelled wrong on this card. That second N in his name was frequently left off. Also notice that the team name is “Pittsburgh NL”. Back when these cards were released, the city name followed by the league was needed for teams from New York, Chicago, Boston, St Louis and Philadelphia because those five cities had ten of the 16 Major League clubs. Pittsburgh really didn’t need the NL designation after their name. If you didn’t know that they were in the National League, then you probably didn’t know what NL stood for anyway. The only times Pittsburgh had two Major League clubs was briefly in 1884 (Union Association and American Association), 1890 (Player’s League and NL) and 1914-15 (Federal League and NL). I guess that fact has technically changed now with the recent MLB ruling that the Negro Leagues are now considered to be Major Leagues and the Pittsburgh Crawfords and Homestead Grays are now Major League teams, but that wouldn’t have retroactively changed the designation on a card from back then (also, the Crawfords weren’t around in 1928).

This is an interesting photo in that they didn’t get Wright in his regular uniform. It doesn’t even to appear to be some type of warm-up jacket either, but that definitely looks like a baseball field and I’m assuming that he’s wearing a Pirates hat. Perhaps it was a team issued item of clothing though. Here’s a photo of Wright and Hall of Fame manager Bill McKechnie, who looks to be wearing the same thing as Wright in the above photo: 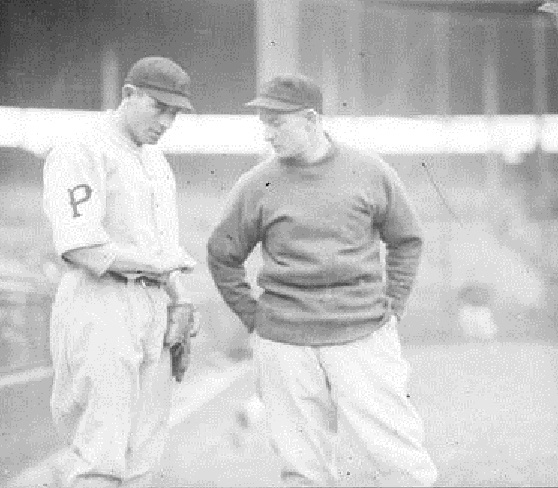 The 1928 season was Wright’s last year in Pittsburgh and his worst full season with the team. It wasn’t that he didn’t do well (he had an .800 OPS), but he was limited to 108 games due to separate issues. The first one was when he was given rest due in early July for two weeks due to a bad cold that followed being weakened by the flu earlier in the season, which was effecting his early season play. The other was after a collision into teammate Fred Brickell in August.

There is only one example of this card on Ebay right now and it’s the one shown above, which lists for $70 plus shipping, There aren’t any sales within the last three months either, so I can’t really give a good price range. Ten of these cards have been graded by PSA (not the one shown above), and included in that group is three of the postcard back variations, so while the Wright card seems to be rare, it’s not extremely rare. Looking at other commons from the set, they have sold for between $20-$30 recently in decent lower grades (ungraded), so that’s a good price range for Wright in the same condition. He was no common player during his time in Pittsburgh, but he’s considered one now.