Card of the Day: 1951 Topps Red Back Cliff Chambers

On this date in 1951, Cliff Chambers of the Pittsburgh Pirates tossed the second nine-inning no-hitter in franchise history. That makes today the perfect day to feature him for the first time in our Card of the Day series. Since it’s his first time, I’m also covering a set here for the first time as well. In 1951, Topps put out two sets of cards that were smaller than standard size for cards you see today. They were sets of 52 cards, with backs similar to a deck of playing cards. There were red backs and blue back sets, with the blue backs being much more difficult to find now. The red back set featured Cliff Chambers, who was making history around the same time that collectors were finding these cards in their packs or sets. 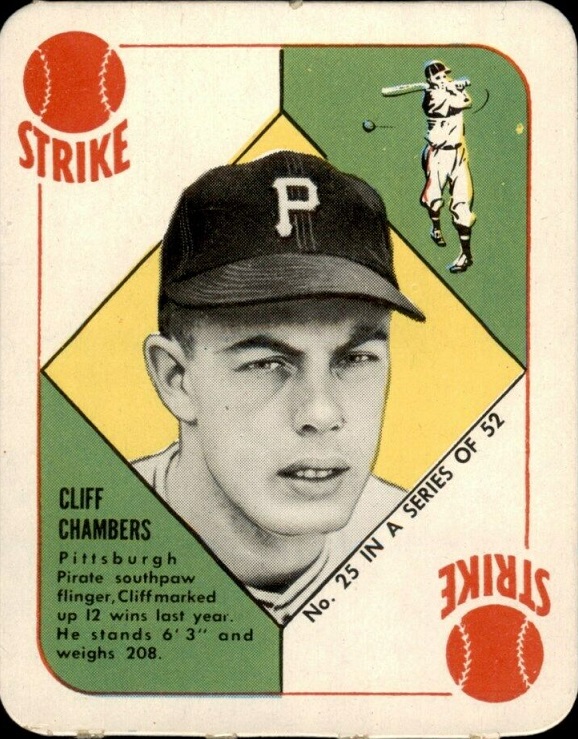 Chambers has an intense look here, something you see on a lot of his baseball cards. I actually really like one of his other cards and was planning to use it today, but I held off because I wanted to cover a new set.  There isn’t much as far as information on the players in this card because they wanted to keep the feel of actual game cards (as you will really see on the back). If you didn’t know, Chambers was a “southpaw flinger”, who marked up 12 wins in 1950. What they fail to mention there is that he also lost a career high 15 games, but what I in turn failed to mention is that the 1950 Pirates went 57-96 on the season, so a 12-15 record isn’t that bad. His ERA (4.30) was 66 points better than the team average.

The front of every card had random game actions. As you can see, Chambers is a strike here, which is true on all of his cards. There’s also cards that say ball, balk, bunt and bunt sacrifice (I’m guessing plain “bunt” is a single?), stolen base, foul ball, foul out, fly out, out, single, double, triple, home run and hit by pitcher (meaning a hit-by-pitch).

The cards have six front designs as far as colors, though it’s just four colors total. All of the cards have yellow, either as the background for the player photo, or in the other two boxes. There are also cards with red and blue for either the background or outer boxes. You could say there are more colors because all of the cards with blue don’t look like the same shade of blue, which is also true of the green. Not sure if that was done on purpose or just poor ink quality, which was common in the early days of card printing. 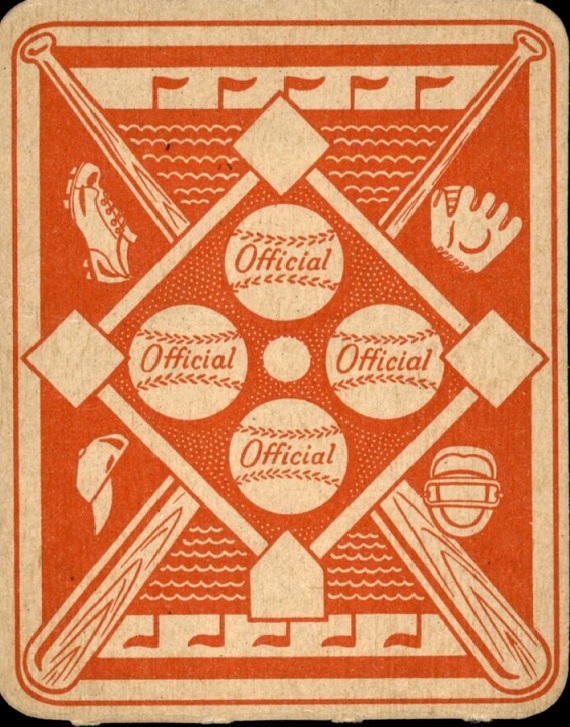 The back has a baseball themed design with the diamond and various items, such as a catcher’s mask, a cap and one shoe. I’m guessing the waves on the side of home plate and second base are fans in the stands? The four baseballs all tell you that these cards are official. What is missing here (and on the front) is anything that tells you that these were made by Topps. In fact, Topps didn’t even put their name on the wrappers.

As mentioned, red backs are easier to find than the blue back cards, so the commons from the red set are also cheaper. That doesn’t mean that they are cheap though. The set is also popular, so there are more sold examples of Chambers on Ebay than there are live auctions. Right now there are currently 12 for sale on Ebay, with the lowest price one going for $13.50 and it’s in rough shape. The most expensive one is about $80 and it’s in great shape, though it’s ungraded. They have sold for $8-$10 in the recent past for lower grade examples. You have choices if you’re interested now, but you can also wait it out and get it cheaper in an auction format (as compared to the buy it now option) if you’re a collector on a budget.

6 May 2021
Card of the Day
Cliff Chambers, Featured