Today’s Card of the Day features a member of the 1971 Pittsburgh Pirates, the club that brought home the fourth World Series title in franchise history. Infielder Jose Pagan was born on this date in 1935 in Barceloneta, Puerto Rico. He played 15 years in the majors, including eight seasons (1965-72) with the Pirates. This is his first time appearing in this series and we are going with the card from that magical 1971 season, when the 36-year-old veteran hit .241 in 57 games during the season, then started all of the odd-numbered games during the seven-game World Series. 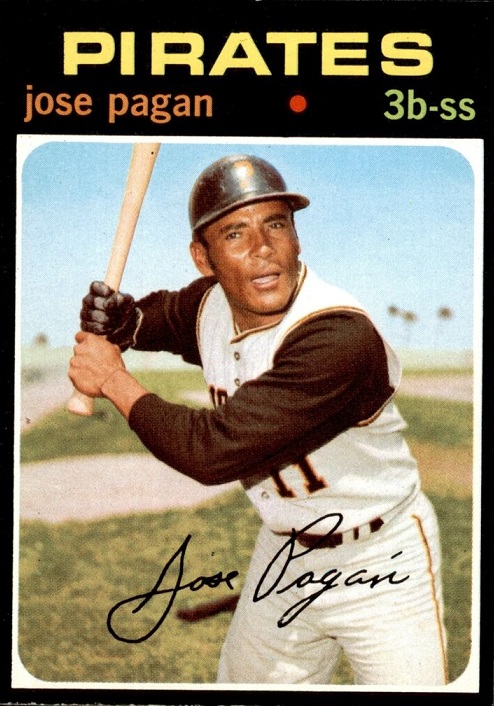 Topps did an interesting thing in 1971. All of the Pirates players have the name up top in yellow writing, except the cards with two rookies on it. Those rookie cards for the Pirates and all other teams were in red writing. Not all teams had yellow writing up top for the team name though. Sometimes they matched the color up to the team and other times, like green for the New York Yankees and Cleveland Indians, they really didn’t try hard. That happened in numerous sets over the years.

The front has a nice staged batting pose of #11, likely taken during a 1970 Spring Training game, though it’s possible it was taken earlier. The 1970 season was the last (for a while) year for the vest style jerseys. Pagan is using one batting glove in the photo, which can also be seen on the front of his 1968, 1969 and 1972 Topps cards. His 1970 Topps card is also a batting pose, but he has no batting glove.

I’m a big fan of the 1971 front & back design. They look great with the black borders/white inner border, though damage shows up much more clear on them. I also like the facsimile autographs, which Topps didn’t always have on the front of cards. The lower case writing for the position and name is a nice added touch. 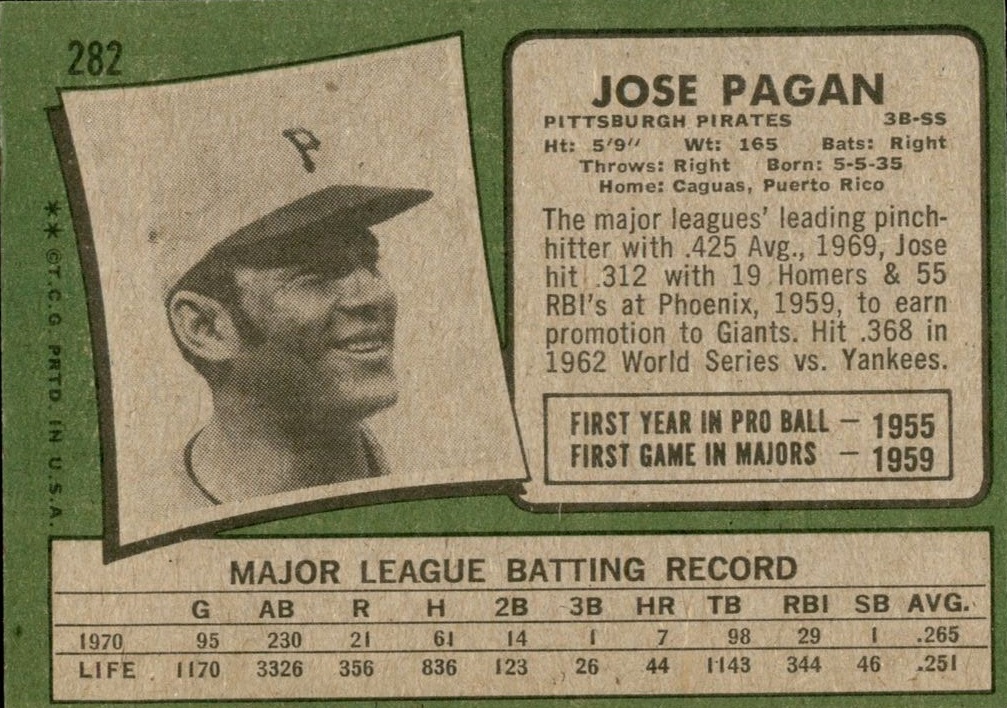 The 1971 backs were definitely something different. In the first 100+ years of card manufacturing, putting player images on the back wasn’t really a thing that happened, so it’s neat to see a second photo of the players in this set. I also like what they added with the “first year in pro ball” and “first game in majors” section. Back when they only had one year of stats to go along with career stats, knowing how long a player had been around by looking at the back of a card wasn’t always easy to figure out. Sometimes they had it in the bio, sometimes you could take a wild guess based on age, but this set lets you know some added facts so you know a little more about the players.

The back bio is a bit difficult to read here and I wasn’t sure what they were trying to say at first either. He actually hit .442 with three homers and ten RBIs as a pinch-hitter in 1969. Then they mention how he reached the majors in 1959, followed by his World Series performance in 1962 while with the San Francisco Giants.

This is a common card from a condition-sensitive set and it’s rather easy to find, with 69 examples for sale on Ebay at the time of this writing. It’s harder to find in high grade and demands a bit of a premium for those nicer cards, but if you just want a decent ungraded one, you can grab it cheap. There are numerous examples on Ebay in the $2-$3 range. A few really nice examples are priced over $20 each. A PSA 9 sold recently for $222. There is also one autographed example for sale, which seems reasonably priced. Pagan passed away ten years ago, so his autograph is getting tougher to find.