In 1922, there was a baseball set released with an advertising on the back for a candy company run by former big league player Lou Gertenrich. One of the players featured in that set was Charles “Babe” Adams, one of the greatest pitchers in Pittsburgh Pirates history. They had two vastly different careers, with Gertenrich playing three big league games, including one game for the 1903 Pirates. Adams pitched for 19 seasons in the majors, including 18 years with the Pirates. I chose this particular card today because Gertenrich was born on this date in 1875. Adams just happened to be the first Pirates player I found on the front of a 1922 Lou Gertenrich back card, but he’s always a good subject. 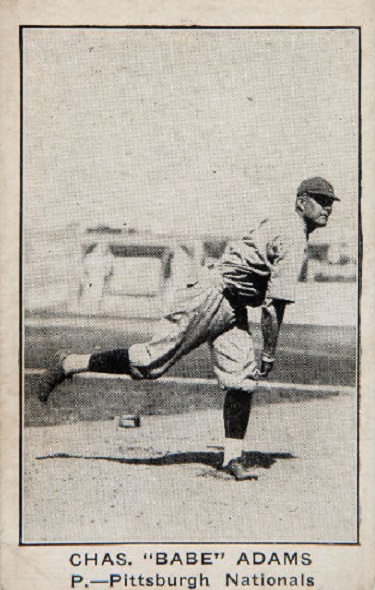 This same post of Babe Adams can be found on other cards from this same time period. It’s also used in the very similar E121 set and the somewhat similar E120 set. Those catalog numbers are just random numbers given much later, with the “E” standing for early caramel cards.

I couldn’t find the date on this original photo, but it wasn’t odd to use older photos in multiple sets during this era, and since Adams had been with the Pirates since 1907, then they could have used a much earlier photo for him. By 1922 when this card was released, he was already 40 years old. He was coming off of a 14-5, 2.64 record in 160 innings, with a league best 1.08 WHIP. His age started to catch up to him in 1922, though his 3.57 ERA was still very good for the era. It was just the second worst season ERA of his career, and would end up being his fourth worst season by the time his career ended in 1926. 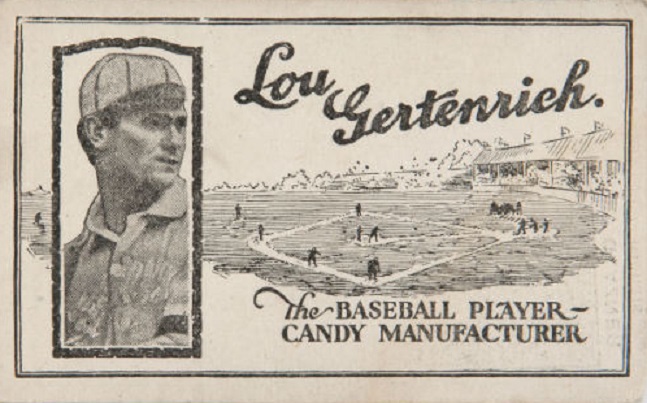 The backs make this a different set than the other sets that use the same front photo. That’s Lou Gertenrich in the photo, pictured at some point during his career that spanned from 1894 through 1913, though there are plenty of missing seasons during that time when he wasn’t playing in the minors/majors. There’s a great old baseball scene in the background, which looks to be a very early photo (19th century) when the fielders actually played on their bases before the ball was put in play. There appears to be two umpires, which was very rare during the early days of baseball. One is standing behind the pitcher and one behind the catcher. The usage of two umpires in 1890 was said to be extremely confusing and unnecessary.

I would suggest two things if you’re interested in this particular card. Either go for the front or the back, but not this same front/back combo. The simple reason is that you might wait years and never see it for sale. However, if you really like the front image (it’s great, isn’t it?), then don’t limit yourself to this set. If you want one of these Lou Gertenrich cards, then don’t worry about the front. They don’t come up for sale often, but a random common might be a lot cheaper than trying to get Adams. You never know which collector with deep pockets needs the card for their set. Anyway, you’re going to pay three figures for a decent Gertenrich back and a nice condition Adams from any of those sets will cost at least $100, but you might be able to get an ungraded copy cheaper in low grade. Nothing is available in that grade now on Ebay.

4 May 2021
Card of the Day
Babe Adams, Featured, Lou Gertenrich