Neil Walker recently announced his retirement from baseball. He was drafted by the Pittsburgh Pirates in the first round in 2004 and played for the Pirates from 2009 through 2015. We were pretty far ahead on scheduled Card of the Day articles so this is the first chance to feature Walker here as a bit of an honor for his 12-year career in the majors. Today’s Card of the Day comes from the 2011 Topps Heritage set, which used the same front design as the 1962 Topps set. 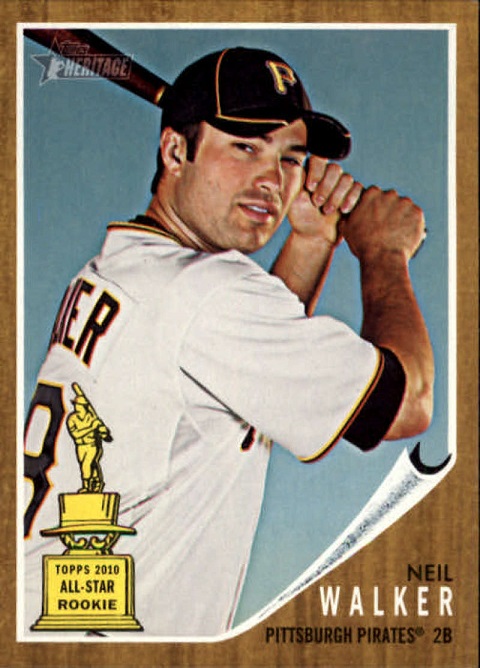 The switch-hitting Walker is shown here on a batting pose from a photo taken some time during the 2010 season. He was with the Pirates briefly in 2009, but he wore the number 19 that season before taking the familiar #18 prior to the 2010 season. This card not only has the throwback design to my favorite Topps set from the 1960s, it also uses the same trophy that ended up on the cards of the best rookies from each position during the previous season. That was an idea that Topps did away with for a little while before bringing it back in 1987, which also used a wood grain design on front as sort of a 25th anniversary homage to the 1962 set. Walker earned that trophy on his card by hitting .296 with 29 doubles, 12 homers and 66 RBIs in 110 games in 2010. He was voted as the best rookie at second base by Topps. He also finished fifth in the National League Rookie of the Year voting. 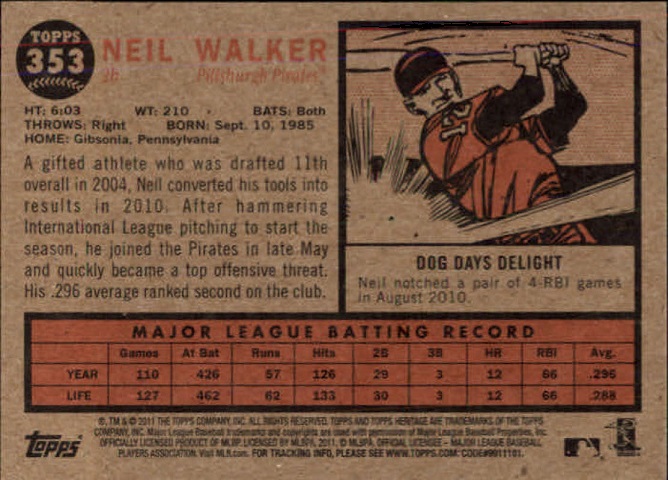 The back is also the same exact design/color combo as the 1962 Topps cards. The cartoon has an interesting photo. I’ve noted numerous times that their generic gray baseball player never looks like the player on the front, so that’s not a surprise that is doesn’t even resemble Walker. They also didn’t stray from the orange-ish color on the back, so all teams looked the same. What is odd about the photo is that they decided to put a uniform number on the player and it’s not the correct number for Walker.

The stats section always included the last year of stats and career stats only in 1962, regardless of the length of the player’s career up to that point. Those were the same nine hitting stats that Topps used for quite some time, before adding stolen bases, strikeouts, walks and slugging in 1981.

The mini player bio notes Walker being drafted 11th overall in 2004 and it calls him a gifted athlete who turned his tools into results. It mentions him hitting well in the minors prior to joining the Pirates that year. He hit .321/.392/.560 in 43 games for Triple-A Indianapolis before playing his first game with the Pirates on May 25th in Cincinnati. What isn’t noted there is that Walker was being used all over the field in Indianapolis after being drafted as a catcher, then playing third base full-time from 2007 through 2009. He had no second base experience prior to 2010 and wasn’t even playing there full-time during his brief stay in Indianapolis either. In three of his final four games in the minors that year, he played left field twice and first base once. When he joined the Pirates in 2010, four of his first six games were as a third baseman. He became the full-time second baseman on May 31st.

This card is considered a common and just like most common cards on Ebay, you’re paying more for the shipping than the card itself. There’s also a chrome version of this card that is more difficult to find and will go for a little more. There aren’t many solo options on Ebay for this card (or the chrome), but you can find it for $2-$3 from a few sellers.