Today’s Card of the Day is #2 for two reasons. It’s the second card that we have featured here for Phil Garner and it’s the second card from the 1979 Topps set. The man they called Scrap Iron turns 72 years old today. He was a two-time All-Star for the Pittsburgh Pirates, who was a key member of the 1979 World Series champs. As you will quickly see, this isn’t the best offering from Garner, but I wanted to get another 1979 Topps card in here to mix things up. I feel like I’m purposely ignoring 1981 Topps cards here because I really like them and it would be my choice for almost every player from that era when selecting their Card of the Day. Anyway, let’s get into today’s card. 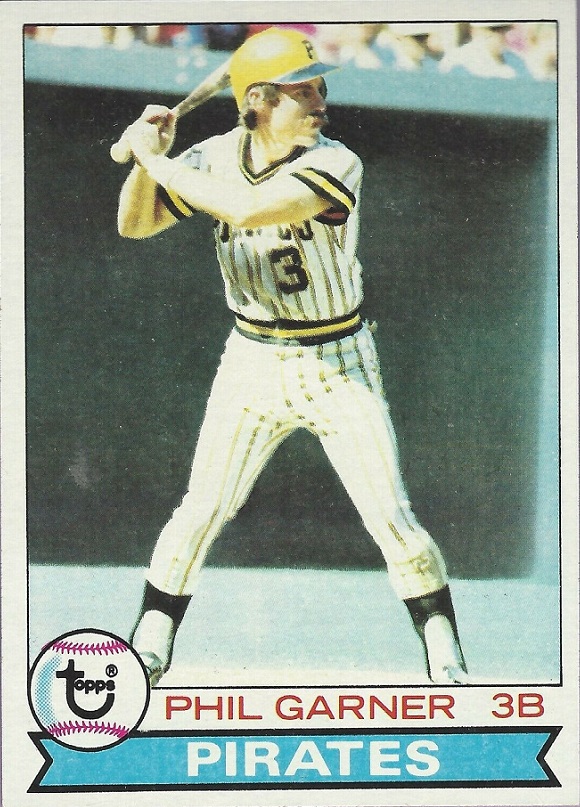 I’m not a big fan of the front design on the 1979 Topps cards. It’s not my least favorite set from the 1970s, but it’s not getting any honorable mention either if I had to give my top five sets from the decade. The one thing that always helps cards for me is when they put a Pirates logo on the front and/or used Pirates colors for the front design. For some reason, they went with blue and red for the Pirates here. They also chose to go with a large Topps logo, where a team logo would have looked good.

This set also has a lot of mediocre quality photos, with Garner being one of the worst in my opinion. Taking actual game photos was still rather new to Topps at this time. It’s something they first did in 1973 (except for the small subset of In Action cards prior). They didn’t get the photo quality part down right away and Garner is a great example of how it could go wrong. I am far from a photography expert (I’m so bad at it that I really shouldn’t be commenting on it), but I assume that the photographer should have waited for some clouds here because this card looked faded from the start. Even perfect condition ones don’t look good. It really looks like I just picked a bad scan to use, but it’s fairly accurate. 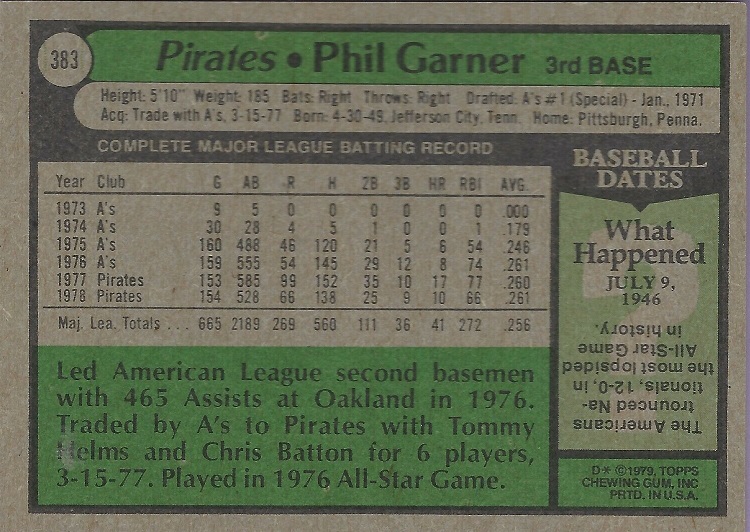 The 1979 Topps cards had the standard nine categories on offense that they used during this time. It was the same group used again in 1980, then Topps expanded to include stolen bases, slugging percentage, walks and strikeouts in 1981 and beyond. As you can see from the stats, the 28-year-old Garner was still relatively early in his big league career, though he had been a regular in the lineup for his last four seasons. The bottom notes that he was an All-Star in the season before joining the Pirates. His 1977 season was clearly better, but he didn’t get his second All-Star nod until 1980. He also made the 1981 squad, despite putting up a -0.4 WAR with the Pirates before being traded to the Houston Astros in August. That 1981 season was his worst over a 12-season stretch (1975-86) that made up the bulk of his big league career.

I did not know the answer to the trivia question, though the date should have been a hint to the event (I’m writing this assuming not everyone checked the answer first). The back here is typical of Topps backs at the time. They would have a background color, black writing, nothing really fancy. They really phoned in the ideas from 1977-81, with the 1977 and 1979 backs looking strikingly similar. The fronts of the cards from 1977-80 were rather uninspiring as well. Definitely not their best offerings, though cards like the rookies of Eddie Murray, Rickey Henderson and Ozzie Smith help keep those sets somewhat popular.

This Garner card is considered a common in the set, though some people classify players like him as semi-stars and that gives their card a bit of a boost. That’s more for in-person transactions, back when card stores and card shows were more popular. Even semi-stars go for the same amount as commons now, so you’re probably going to pay $2-$3 delivered for a nice example, though one person was selling a nice Garner and Don Robinson in one auction for $1.09 delivered, which is an outstanding Ebay deal. There’s a PSA 10 of this card available on Ebay for $79, just in case you want the best condition one possible. There are also a handful of autographed copies out there (obviously done after they were released as autograph cards weren’t around in packs back then).