Today’s Card of the Day comes from an interesting set from the 1930’s, which was released over a three-year time frame. This is the first time that we have featured the 1934-36 Diamond Stars set, and it’s also the first time that we have included pitcher Red Lucas in this series. He played for the Pirates during the 1934-38 seasons. I almost featured him here yesterday because he was born on April 28, 1902, and as you probably know already, date of birth is one of the top answers on the board for the question, “Why did you choose to feature that player today?”. I decided to go with a more recent card yesterday, only to check out the subjects for today’s Pittsburgh Pirates History article to see that Red Lucas was mentioned again, this time for starting the first Sunday home game in Pittsburgh Pirates history on this date in 1934. That game was also his debut for the Pirates.

As you no doubt read yesterday, Lucas is one of the more interesting players in baseball history. He was a workhorse pitcher, who picked up 157 career wins. He was a great hitter for a pitcher, putting up a .281 career average, which led to regular opportunities as a pinch-hitter in his career. He was also a strong fielder, committing 12 errors as a pitcher in 15 seasons, back when small ball was more prevalent and pitchers had more fielding opportunities. He’s an underappreciated player in baseball history, and most importantly, his 1935 Diamond Stars card is today’s Card of the Day. 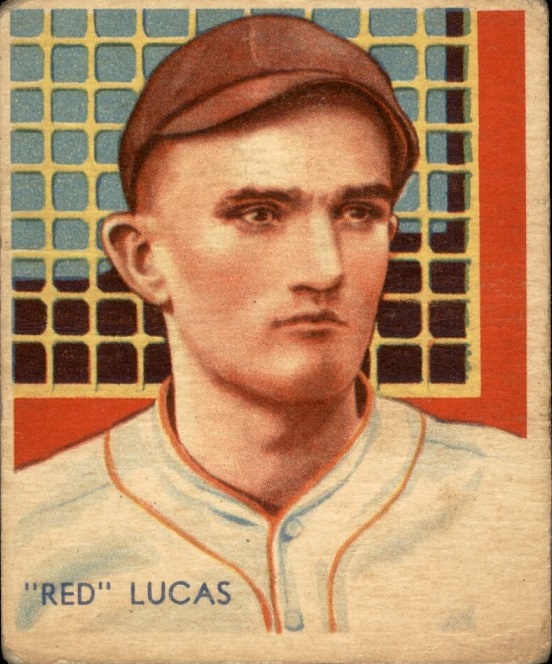 Part of the intrigue with this set is the colorful backgrounds for players, some of them with odd artwork behind the players. The artists used lots of red, yellow and light blue on the cards, and the art was based off of a real photo of the player, though they embellished the backgrounds while adding color to the black and white photos. This particular Lucas photo was used in the 1934 Diamond Matchbook set (not related to the Diamond Stars set, despite the similar name) and the 1933 Double Header pin set, which tells you that the photo here is from when he was still with the Cincinnati Reds. 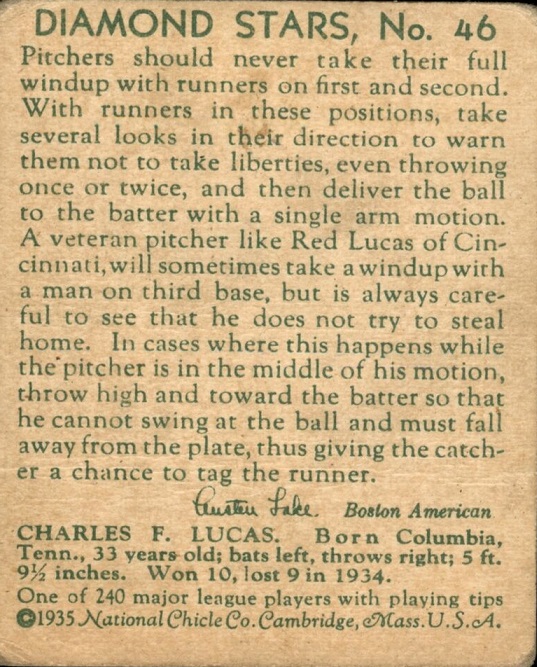 The back here gives some pitching advice to help pitchers hold runners on base. It uses Lucas as an example, though they call him the Cincinnati pitcher and he was already with the Pirates for over a year before these cards were released. This set was released over a three-year time period and there are a few indicators on the back about which year this card was released. The main one being at the very bottom with the date in the copyright, though that’s not always true for every set that has the date on the back. We featured a Donruss card here recently that has a different copyright date than date the cards were released, so it happens. The brief mention of stats on the back tells you that he had a 10-9 record in 1934, so this couldn’t have been part of the 1934 set because they wouldn’t have up to date stats. The third way to tell is just knowing about the set. Lucas is card #46 in the set. The first year only included cards #1-#24. The second year included cards #1-#84, or in other words, the first printing of cards numbered 25-84. Some of those cards were printed for a second/third year in 1936 when they added 24 new cards, but Lucas was not among that group. The 1936 cards also have blue printing on the back, giving you a fourth indicator of the year.

If you’re interested in this card, you’ll be happy to know that it’s relatively inexpensive for a Pre-WWII card and it’s not that difficult to find, so you don’t need to settle for the first one you see or choose between just 2-3 options. It’s not a hugely popular set and just two of these Lucas cards have sold in the last three months. One in decent shape sold for $14 delivered and another in nicer shape went for about $30. There are a few nice ungraded cards selling in the $20-$30 range right now. There are reprints out there from this set that have white borders and back background, as well as the word reprint written very small on the bottom, so just make sure you’re not buying that before you jump at one that seems to be a bargain price.