Today’s Card of the Day is one of the newer ones that you will find here. It’s a rookie card of a first round pick by the Pittsburgh Pirates, who had a brief career in the majors that started and ended in 2011. Daniel Moskos was the fourth overall pick in 2007 out of Clemson. It took him four years to make it to the majors and he had a fairly successful half season with the Pirates, putting up a 2.96 ERA in 24.1 innings over 31 appearances. Despite the short big league career, there were a large assortment of cards to choose from here for his first appearance in this series. His status as a first round draft pick led to a lot of cards being produced for him in 2007, and then a few more when he debuted in the majors in 2011. He also had a small assortment of cards produced while he was in the minors in 2008-2010. I’ll note that this card wasn’t my first choice, but that was only due to a poor scan selection for a different card, which I will feature here in the future if I can get a better scan. This was my second choice, a 2011 Topps Update card. 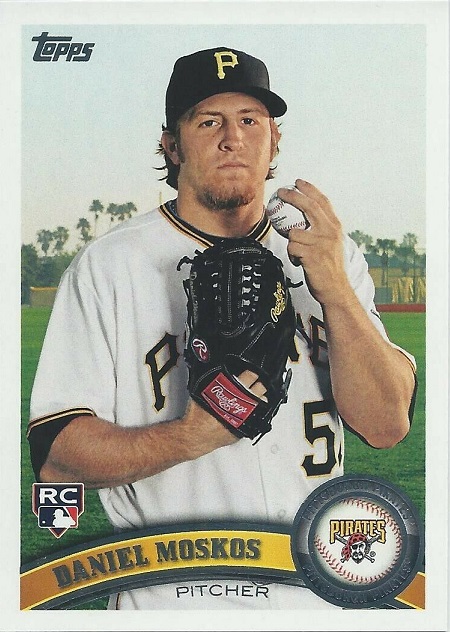 I like the 2011 Topps design. It’s simple, but I like the team logo in the baseball a lot. It might be hard to see in the scan, but in the silver circle around the baseball, it says Pittsburgh Pirates on the top and bottom. The “RC” in the MLB logo just above his name denotes that this is his rookie card. Moskos gives an intimidating looking while showing off his pitch grip. The poor man took such a beating over the scouting report that said “wipeout slider” that using that description of a slider became mocking. We all remember that he was an overdraft, though most people still had him in the top half of the first round, so it wasn’t a huge reach, just not who most fans wanted. If it helps at all, 15 of the other top 30 picks that year did worse than Moskos, so he was technically an average first rounder. We all wanted Matt Wieters though, I know. He would have been nice to have from 2009-12 when he made very little and put up 13.3 WAR. He had just 5.0 WAR in his last eight years combined at a cost of more than $60,000,000, so things got really bad for him (with production, not $$$) when the Pirates were good. That had to be some sort of baseball gods’ magic at work. 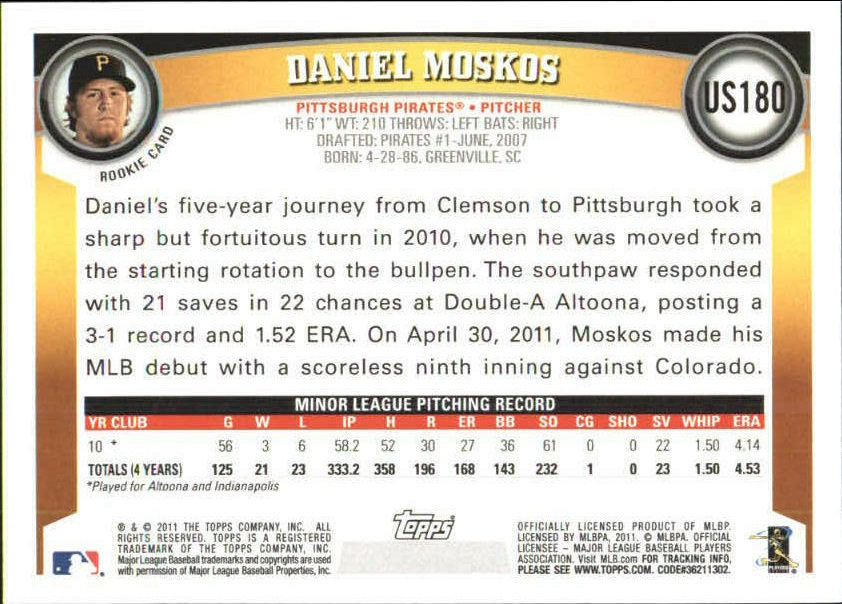 This card has an added photo on the back, though it appears to just be a cropped version of the photo on front. The bio notes that he had a five-year journey from Clemson to Pittsburgh, though it technically didn’t even take four full years from signing to his big league debut. The Pirates used Moskos as a starter at first and it was fairly clear from the beginning that he wasn’t starter material. I was at one of his early starts and saw his fastball drop into the mid-80s around the end of the third inning (maybe fourth). He was definitely built for relief and it’s a bit surprising that the Pirates didn’t give him more of an opportunity in the majors. When does a rookie ever put up a 2.96 ERA in 31 games and never get another chance? It had nothing to do with injuries either, which would be the logical guess. He was far from dominant in the majors, with a very low strikeout rate, but the Pirates gave up on him just three months into the 2012 season. Obviously it didn’t come back to hurt them, yet it still feels a bit strange that a strong performance didn’t get him anywhere.

If you’re interested in this card, then there are multiple versions to consider. I like the regular issue cards personally and you can get that for $2-$3 delivered. However, Topps has gone overboard on some sets as far as variations. Right now on Ebay, you can also get a gold version of this card that is tougher to find that the base/regular version, but it’s not extremely rare. You can also find this card with blue and red borders and those are tougher than the gold. Then there are the fancy looking versions. There’s a silver diamond card and a cognac version, which are both very rare. HOWEVER, Moskos is obviously a common card, so the most expensive card of his on Ebay right now from this set is going for $8, and $5 of that cost is shipping. You could get all six versions for about $20 total, maybe a little less if you can find multiple from the same seller.